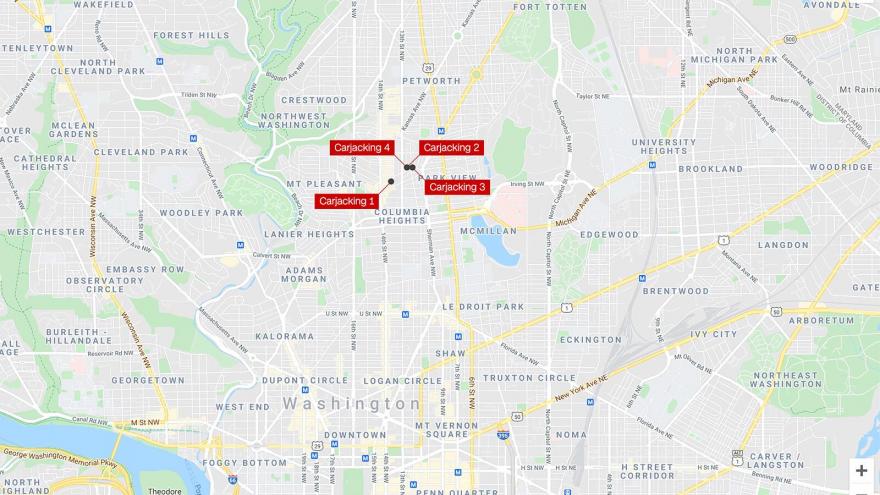 A 12-year-old boy was arrested Thursday evening after a series of attempted armed carjackings and one successful one in Washington, DC.

(CNN) -- A 12-year-old boy was arrested Thursday evening after a series of attempted armed carjackings and one successful one in Washington, DC.

All four incidents happened in the span of one hour, according to a Metropolitan Police Department (MPD) news release.

The boy was arrested by the MPD on the same day and charged with four counts of armed carjacking, the news release said. Police are still searching for a second suspect who was seen on a surveillance camera.

The incidents began around 6:30 p.m., when a rideshare driver was picking up a customer and was approached by the two suspects. One of the suspects pointed a gun at him from the driver's side door and ordered him to get out of the vehicle, according to an incident report. The other suspect grabbed the victim's phone.

The driver refused to exit the car and was able to drive away.

At around 7:20 p.m., the two suspects approached a man who was walking toward his car. One suspect pointed a handgun at the man and demanded the car keys. The other suspect pulled out a bag from the car and took a laptop before the pair fled the scene, according to an incident report.

Less than 10 minutes after the third carjacking, the suspects approached a woman who was sitting in her car. One suspect opened the driver's side of the car, pointed a handgun at the woman and ordered her to get out of her car, according to police.

The woman said she was unable to understand due to a language barrier, an incident report said. A suspect then motioned to the woman to exit her car. The suspects drove away in the car, which was eventually recovered, police said.