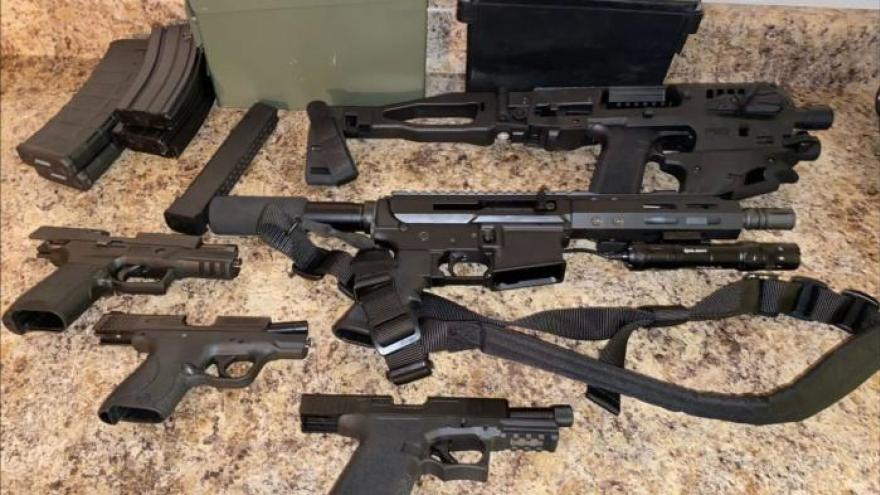 Two men were arrested in connection with ghost guns, untraceable, self-assembled firearms, that are often made with parts sold online. They are now the subject of new regulations announced by the Biden administration.

(CNN) -- Two men were arrested and a "substantial cache of illegal material" to manufacture ghost guns was recovered in Southern California on Thursday, police said.

About 200 ghost gun frames, handgun slides, two assault weapons, a rifle, firearms magazines, ammunition and numerous parts and tools for manufacturing ghost guns were recovered as a result of an investigation by the Regional Illegal Firearms Trafficking Team (RIFTT), according to the Los Angeles Police Department.

Ghost guns, which are untraceable, self-assembled firearms, are often put together with parts sold online, and in April were the subject of new regulations announced by the Biden administration.

Under new regulations, anyone purchasing a kit must undergo a background check, and those selling kits are required to include a serial number on the components that make up the weapon, so the eventual firearm can be traced.

The RIFTT, which is comprised of the LAPD's Gang and Narcotics Division (GND), Homeland Security Investigations and the Los Angeles Airport Police, served two search warrants Thursday morning at addresses in San Pedro and in Gardena, according to police.

"The search warrant was the result of an investigation by RIFTT where a foreign national had attempted to illegally export 11 ghost guns," the LAPD said.

One of the arrested men was booked for manufacturing assault weapons. The second was booked for violation of a rule that "generally makes it unlawful for any nonimmigrant alien to ship or transport in interstate or foreign commerce, or possess in," police said.

Correction: An earlier version of this report misstated when the cache of illegal material was found. It was Thursday.