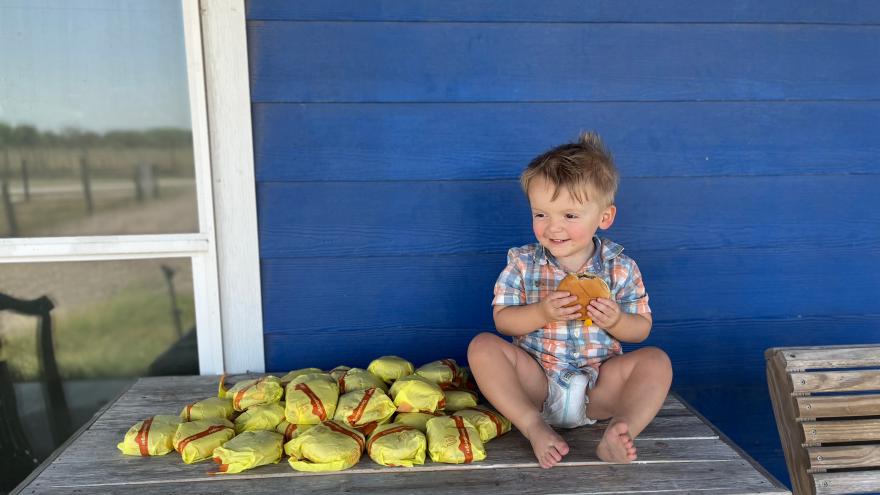 (CNN) -- A Texas mother learned an important lesson about leaving her phone unlocked after her 2-year-old son accidentally ordered 31 McDonald's cheeseburgers from DoorDash.

On Monday, Kelsey Golden, who works in media marketing for a school, was working on the school's annual yearbook on her computer at home. She was transferring photos from her phone to her computer when her 2-year-old son Barrett started "yanking" on her phone, she told CNN.

Golden explained that her son loves the camera feature on her phone. "He likes to look at his reflection," she said, instead of playing games or doing other activities on her phone.

But this time, Barrett didn't just stare at his reflection. "He starts pressing the screen, swinging it around like his arm is a roller coaster," she said.

Then, Golden received a notification that her DoorDash order was taking longer than usual -- which was unusual, because although she sometimes ordered DoorDash for her two older children's lunches at school, that morning she had packed their lunches.

A work colleague furthered the confusion when she told Golden that her children were indeed eating their packed lunches at school -- no DoorDash in sight.

"Right as she said that, I was outside playing with Barrett on the porch," she said. "A car pulls in and I was like, 'what'? so I went over to it, and she gets out a giant McDonald's bag and is like '31 cheeseburgers?'"

"I thought, oh my gosh, he really did this."

The accidental order was even more out of place because "no one in our family likes cheeseburgers," said Golden. So she posted on her town Facebook page offering free cheeseburgers.

"It kind of blew up from there."

"One woman came by, she was pregnant and wanted six of them," she said. "No judgment." She added that she also donated some cheeseburgers to neighbors.

The total order came out to $91.70, in part because Barret left a "really generous" 25 percent tip, said Golden.

She said she had "no idea" that the mishap would go viral. On Friday, she and Barrett were invited to a meet-up with McDonald's staff, where her son was able to meet the company mascots, take photos, and enjoy some chicken nuggets.

"I hope it spreads a little humor in a sad dark world," she said.