2021 is ending with record-high new Covid-19 cases and the likelihood of an even higher, post-holiday surge 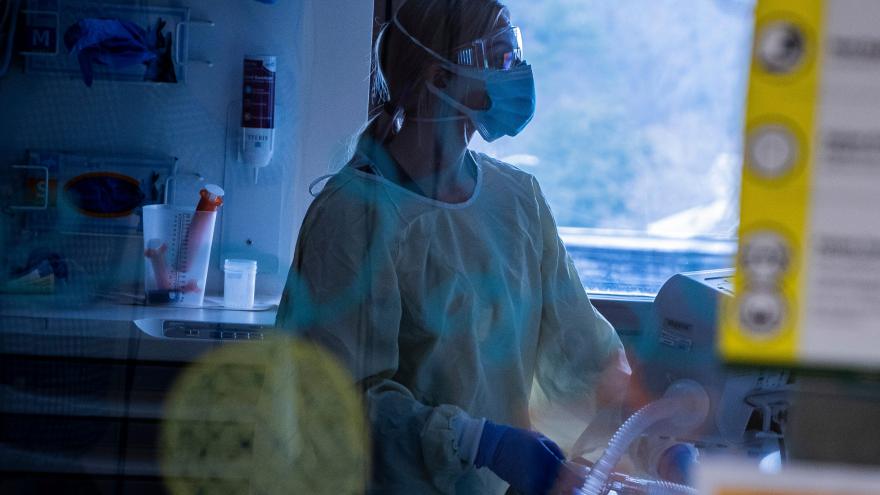 (CNN) -- The US is heading into a harrowing phase of the pandemic amid the confluence of unvaccinated Americans, waning immunity among those not boosted and the most contagious strain of coronavirus ever to hit the county, health experts say.

The average number of daily Covid-19 cases Tuesday reached 265,427 -- a new pandemic high, according to data from Johns Hopkins University. The previous record of 251,989 was set January 11.

And doctors expect the holiday surge -- fueled largely by the Omicron variant -- to get worse following New Year's Eve.

It comes just as pediatric Covid-19 hospitalizations rise and millions of children get ready to go back to school next week. Pediatrician Dr. Peter Hotez said he thinks some schools in areas of very high transmission should delay a return to in-person learning.

"I wouldn't do it now," Hotez said Tuesday night. "You have got a screaming level of transmission in the Northeast, in New York City and Washington, DC. Trying to open schools at this point, it's hard to imagine how things will go well."

But the US Department of Education is urging school districts to take safety measures to ensure classrooms remain open for in-person learning in the second half of the school year, according to a new resource guide addressed to school leaders and obtained Monday by CNN.

"It is incredibly important that all schools work to remain open for in-person learning five days a week, especially in light of the Omicron variant," the guide said.

Despite a recent onslaught of Covid-19 cases in New York City, the nation's largest public school system will reopen as planned next Monday, Mayor Bill de Blasio said. The city's public schools will give a week's worth of at-home tests to students who test positive so they can monitor their condition and return as soon as it's safe, he said Tuesday.

Across the country, an average of 305 children were fighting Covid-19 in a hospital on any given day during the week that ended Sunday, according to data from the Centers for Disease Control and Prevention and the US Department of Health and Human Services.

That's a more than 48% increase from the previous week and 10.7% lower than the peak average of 342 children who were admitted to hospitals with the virus at the end of August and early September.

While everyone age 5 and older in the US is eligible to get a vaccine, about 40% of the total population is not fully vaccinated, putting them at a higher risk for Covid-19's most severe outcomes, including serious illness and death.

The number of children who need medical attention at Children's National Hospital in Washington, DC, has nearly doubled, said Dr. Roberta DeBiasi, division chief of infectious diseases at the hospital.

The hospital admitted about 20 children at its peak, but that number has jumped to between 40 and 50 during the Omicron surge, DeBiasi said. Most of the patients are unvaccinated, partially vaccinated or immunocompromised, she said.

"So that is really the big difference, and it's not because the virus is more severe. It's because the overall infectivity and number of cases has really shot up," DeBiasi said.

Even so, hospital staff have been able to keep the mortality rate low, she said. "Even our children that are extremely ill, critically ill, we've gotten very good at taking care of these children."

And at the Lurie Children's Hospital of Chicago, Covid-19 cases are roughly three times higher than the hospital's previous peak in December 2020. In the past week, hospitalizations are four times higher what the hospital typically sees.

Overall, experts are warning the next few weeks will be rough for the country.

"There's no question that January will be filled with a lot of short-term challenges -- hospital beds, staffing shortages, tests, shortages of almost everything," said Andy Slavitt, former senior adviser to the Biden administration's Covid-19 response team.

"It's tough for the system to handle this many cases at once."

Millions of Americans have turned to at-home Covid-19 tests as a precautionary measure before traveling or gathering for the holidays. Health experts have urged people to get tested before getting together, especially indoors.

But quick antigen tests might be less able to detect the Omicron variant, the US Food and Drug Administration said Tuesday.

Studies on antigen tests that used patient samples that had the live virus showed that while the tests detect the Omicron variant, they did so with less sensitivity, the FDA said. Sensitivity measures how often a test can give a positive result when someone has the disease.

More studies on the tests are ongoing, and people should continue using them, the FDA said.

"The tests are still worthwhile. Don't let anybody think that the FDA was saying that tests are no longer good," said Dr. Anthony Fauci, director National Institute of Allergy and Infectious Diseases. "They say they're less sensitive now. They never were 100% sensitive."