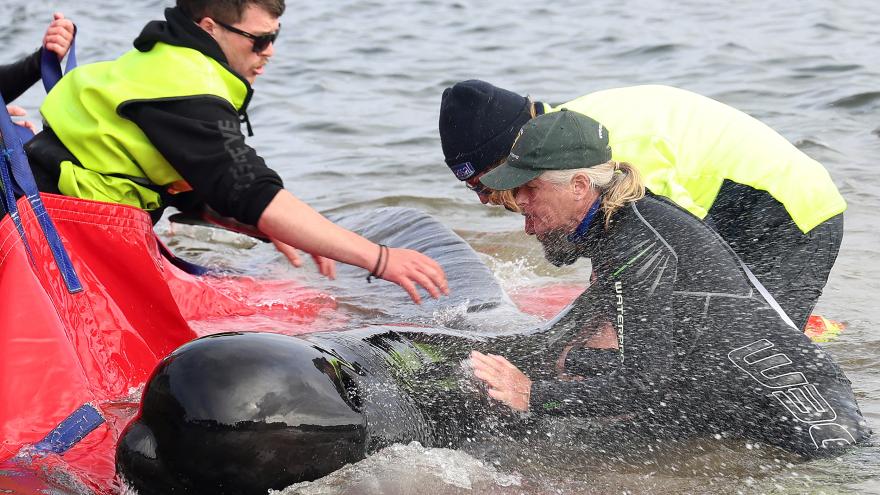 (CNN) -- Rescue teams have managed to save 32 pilot whales following a mass stranding this week in a remote part of in Australia that saw the deaths of around 200 whales.

The stranded pod had been discovered by Tasmanian wildlife officials on Monday -- at which time, half of the group were still thought to be alive.

But as the week progressed, and conditions worsened, the number of survivors began to dwindle.

"Of the 35 whales that were remaining alive this morning, we've managed to re-float, rescue and release 32 of those animals and that's a terrific result," said Brendon Clark of the Tasmania Parks and Wildlife Service in a press conference on Friday morning.

Rangers were forced to euthanize one whale that had re-stranded itself on Thursday night and three more whales remained "out of reach due to tidal conditions," Clark said.

"Priority still is the rescue and release of those remaining animals and any others that re-strand," he added.

Rescue teams would then transition on to disposing the carcasses at sea.

"We're going to try to take them as far offshore as we can," Clark said. Earlier warnings had been issued to swimmers to avoid the area in case of sharks gathering.

Cases of whale strandings have baffled marine scientists for decades.

This is the second mass stranding to have taken place in Tasmania this week after more than a dozen sperm whales, mostly young males and believed to be part of the same bachelor pod, were found dead on another beach.

The largest stranding took place in 2020 when more than 450 pilot whales were found.

"What caused the whale stranding is unknown and may not be able to be determined," said the Department of Natural Resources and The Environment on Thursday.

Their experts are currently "undertaking post-mortem investigations" into the latest stranding.