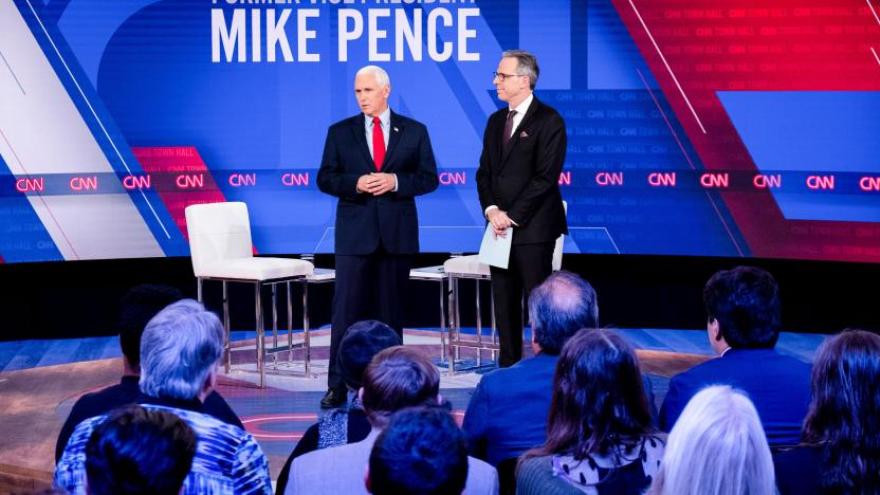 (CNN) -- Former Vice President Mike Pence in a CNN town hall on Wednesday refused to commit his support to former President Donald Trump's 2024 campaign and left the door open to seeking the Republican nomination himself.

Speaking a day after the release of his memoir, "So Help Me God," Pence was mostly coy when discussing his own plans while touting the Trump administration's policy agenda.

But Pence was more direct when asked about the January 6, 2021, riot at the US Capitol. The former vice president called it "the most difficult day of my public life."

Pence also revealed more about his personal feelings about that day and his views on the state of American politics in the aftermath of a presidency that he said did not end well.

Here are takeaways from the town hall:

Asked about Trump's new campaign for president, which he announced Tuesday, Pence said he believed that there would be "better choices" on the ballot in two years.

Pence left open the possibility that one of those preferable options, as he saw it, might be him.

Moments earlier, as he grappled with the Trump question, Pence said, "I think it's time for new leadership in this country that will bring us together around our highest ideals."

Pressed by Tapper about his future, Pence replied, "There may be someone else in that contest I'd prefer more."

It was, Pence said, the "most difficult day of my public life."

"I thought it was important, as vice president, that I offer my advice and my counsel to the president confidentially. And we did," Pence said of his role that day, when Trump and others allied with the then-president tried to convince him to launch an unconstitutional bid to block or overturn the election results.

Pence said his decision to ignore Trump's entreaties was rooted in something deeper than their relationship.

"I had one higher loyalty, and that was to God and the Constitution. And that's what set in motion the confrontation that would come to pass on January 6 because I had taken an oath to the Constitution of the United States," Pence said.

Breaking with the man who selected him as a runningmate ahead of the 2016 election and elevated him to within a whisper of the Oval Office "was difficult," Pence said.

"But I'll always believe," he added, "that we did our duty that day upholding the Constitution of the United States and the laws of this country and the peaceful transfer of power."

In the days that followed, Pence said, he was upset with Trump over the then-president's role in the deadly insurrection.

"The president's words and tweet that day were reckless," Pence said. "They endangered my family and all the people at the Capitol."

But Pence also shut down any speculation as to whether he would testify before the House select committee investigating January 6, saying that "Congress has no right to my testimony." He said it would set a "terrible precedent" for a congressional committee to summon a vice president to discuss deliberations held at the White House, arguing that it would violate the separation of powers and "erode the dynamic" between a president and vice president.

Deciding to break with Trump

After CNN played footage of January 6 rioters chanting, "Hang Mike Pence," the former vice president said he was saddened to see the images again, but that in the moment, "it angered me."

Pence, who moved to a secure location as the Capitol was breached, said he told Secret Service that he would not leave, insisting he remain at his post, in part because he did not want the mob to see his motorcade speeding away.

"But frankly, when I saw those images, and when I read a tweet that President Trump issued, saying that I lacked courage in that moment, It angered me greatly," Pence said. But, he added, "I didn't have time for it."

After years standing by Trump's side through assorted scandals and crises -- and also benefiting from the former president's political rise -- Pence said he had decided that, in this fight, they would take opposite sides.

"The President had decided in that moment to be a part of the problem," said Pence, who told Tapper he "was determined to be part of the solution."

Pence then discussed gathering the Republican and Democratic leadership of the House and Senate on a conference call, reaching out to Pentagon brass and Justice Department officials "to surge additional resources" to assist Capitol Hill police officers.

Congress ultimately reconvened on the same day and, after Republican challenges to the count, finally confirmed Biden as the next president.

"We demonstrated to the American people and the world the strength of our institutions (and) the resilience of our democracy," Pence said. "But those memories, those images will always be with me."

'Don't ever change': Pence recalls difficult meetings with Trump in the aftermath

Pence described in vivid detail his meetings with Trump in the days after the riot at the Capitol. When he first saw Trump at the White House days after January 6, he said the then-president immediately asked about his family and whether they were OK.

Though it was at odds with the public perceptions of Trump, Pence said, he believed that Trump was "deeply remorseful in that moment."

"I could tell he was saddened by what had happened," Pence said. "I encouraged him to pray. He told me many times that he was a believer, and I told him to turn to Jesus hoping that he would find the comfort there -- and that I was finding in that moment."

In the days that followed, Pence said he saw Trump for another meeting and that the president was still "downcast." After they finished talking through administration business, Pence said, "I reminded him that I was praying for him" and Trump was "dismissive about it."

"As our meeting came to a close, I stood up," Pence said. "I looked at him and I said, I guess there's just two things we'll probably never agree on. And he looked up and said, 'What?'"

"I referred to my role on January 6," Pence said. "And then I said, 'Never gonna stop praying for you.'"

"He smiled faintly and said, 'That's right. Don't ever change.' And we parted amicably as much as we could in the aftermath of those events."

Pence suggests 2020 election denial is a political loser, but campaigned with deniers anyway

In lamenting Republicans' underwhelming performance in the 2022 midterms, Pence observed that candidates who talked about the future outshone those who focused more on "relitigating the past."

"And I expect that's going to be taken to heart by Republicans," Pence said.

Asked why, then, he chose to campaign alongside election deniers -- including GOP Senate nominees Don Bolduc in New Hampshire and Blake Masters in Arizona, both of whom lost last week -- Pence said party loyalty trumped other concerns.

"I've often said, 'I'm a Christian, a conservative and a Republican -- in that order. But I am a Republican," Pence said, "and once Republican primary voters had chosen their nominees I went out and traveled to 35 states over the last year and a half to see if we could elect a Republican majority in the House, Senate, elect Republican governors all across the country."

Pence added that his appearance on the stump with a candidate "didn't mean, as it hasn't meant in the past, that I agreed with every statement or every position candidates that I'm supporting in the Republican Party have taken."

He also tried to make a false equivalence between Trump's lies about election fraud in 2020 and Hillary Clinton's comments after 2016, noting that she said "Donald Trump was not a legitimate president, for years."

Sticking to a carefully crafted message

Pence has very carefully crafted his explanation of the events leading up to January 6, during that day's attack on the Capitol and in his conversations with Trump afterward -- and isn't deviating from that explanation.

As he has unspooled those events, Pence's comments have been virtually identical in his book, in CNN's town hall and in interviews with other news networks in recent days.

He'd made clear what he is willing to say. Among the key points: That Trump listened to the wrong lawyers in the lead-up to January 6; that he was "angry" watching the attack on the Capitol; that he left Trump with a commitment to continue to pray for him; and that the two no longer talk.

But it's just as clear where Pence won't go: He won't reveal any simmering resentment with Trump, saying his faith commands forgiveness. He won't place blame fully on Republicans for agitating the party's base with falsehoods about election fraud. He won't legitimize the work of the House committee investigating the events surrounding that day.

Pence's slow, measured delivery of a consistent message is a characteristic that traces back to his days as a self-styled "Rush Limbaugh on decaf" conservative talk radio host in Indiana.

It's an approach that has remained consistent through his entire political career, including 12 years in the House and four years as Indiana governor. Pence often repeats virtually the same message -- line by line, paragraph by paragraph -- even when that message doesn't directly answer the question he was asked.