The Half Moon Bay massacre was an apparent workplace violence case. The suspect had been accused of violence against a coworker in 2013, court records show 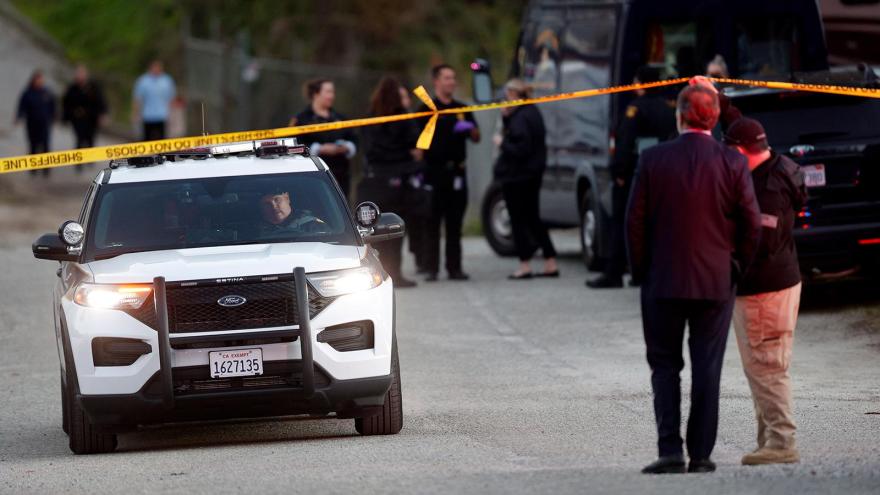 (CNN) -- The 66-year-old man suspected of killing four people at a California mushroom farm he worked at and three others at another nearby site Monday had been accused of trying to suffocate and threatening to kill a former coworker at another job nearly a decade ago.

Court records obtained by CNN show the suspect, identified by authorities as Chunli Zhao, was subject to a temporary restraining order after a former coworker and roommate accused him of attacking and threatening him in 2013.

Yingjiu Wang, who worked with Zhao at a restaurant and lived with him in a San Jose apartment, wrote in a court declaration that Zhao's violent behavior started after Zhao quit that job in March 2013.

Early in the morning two days later, Zhao came into Wang's room and asked for his salary. When Wang told him to pick it up at the restaurant, Zhao said he would kill Wang, and then "took a pillow and started to cover my face and suffocate me," Wang wrote.

"While I couldn't (breathe,) I used all my might within the few seconds to push him away with my blanket," Wang wrote. He said he called for help and another roommate came to the door, but Zhao had allegedly locked it. The two men ended up wrestling on Wang's bed before Zhao calmed down, according to Wang.

Two days later, he wrote, Zhao threatened him again, saying "he can use a knife to cut my head if he can't come back to work." Wang wrote he had no control over Zhao's work status at the restaurant.

A judge issued a temporary restraining order against Zhao, which prevented him from getting too close to Wang and also banned him from owning or buying a gun, according to the court paperwork. The restraining order expired in July 2013. An attorney for Zhao in the 2013 complaint did not respond to requests for comment. Wang could not be reached for comment.

The incident was first reported by the San Francisco Chronicle.

"He had an opportunity, we do believe, to hurt other people, but he had targeted individuals that he went after and pursued," Corpus told CNN's Erica Hill and Jim Sciutto Tuesday morning.

Zhao was a "co-worker or former co-worker" of the victims at each shooting site, the sheriff's office said.

"The only known connection between the victims and the suspect is that they may have been coworkers," Corpus said.

The US has already suffered 39 mass shootings this month -- more than any other start of the year on record.

In California, 19 people were slaughtered in three mass shootings in just 44 hours:

• Eleven people killed after a gunman opened fire at a dance studio in Monterey Park, near Los Angeles;

• Seven people killed Monday in the Half Moon Bay area near San Francisco;

• One person killed and seven others wounded Monday evening in Oakland.

While the motives remain a mystery, the Half Moon Bay killings bear some similarities to the carnage in Monterey Park. That's where 72-year-old Huu Can Tran gunned down 20 people -- killing 11 -- during Lunar New Year weekend celebrations, authorities said.

Both cases share ties to the Asian American community. And the shooter or suspect in each is of Asian descent and far older than the 33-year-old average age of mass shooting perpetrators, according to the Rockefeller Institute of Government.

In San Mateo County, Zhao was taken into in custody about two hours after the first call to police while he was parked at a sheriff's substation with a semi-automatic handgun in his vehicle, the sheriff said.

"Some of the victims were Chinese, that the perpetrator was Chinese and that this was an agricultural community -- they were agricultural workers," Half Moon Bay Mayor Deborah Penrose said Tuesday.

Officers in San Mateo County found four people dead and one person wounded at a mushroom farm. Moments later, three more people were found dead near a trucking facility about two miles away in Half Moon Bay, county officials said. Authorities identified those killed as five adult men and two adult women, adding that the the person wounded was a man who is being treated at a trauma center for his injuries.

That same evening, yet more bloodshed unfolded -- this time in the Bay Area city of Oakland. One person was killed and seven more wounded were in stable condition, police there said.

Suspect had lived on first property

The suspected gunman had lived on the first shooting site for seven years, a company spokesperson told CNN. That property, formerly known as Mountain Mushroom Farm, was acquired by a company called California Terra Garden in March 2022, and there were several mobile homes and trailers for employees on the property, said spokesperson David Oates.

The farm grows mushrooms and "other food-grade herbs" like basil and oregano, Oates said.

All employees "had background checks, and there was nothing to indicate anything like this was even a possibility," the spokesperson added.

California Terra Garden said it was "shocked and grief-stricken over the senseless loss of four of our friends and long-time employees, and we pray for the team member that remains in critical condition."

The owners of a mushroom farm also in the area said they had no knowledge of the gunman nor his motive, they said.

"We are shook and very eager to gain more information from the authorities and their investigations," Concord Farms said in a statement to CNN. "Our hearts are with the victims, their families and the Chinese American community -- from Half Moon Bay to Monterey Park."

The suspect, who was not known to local law enforcement prior to the shooting, had legal possession of a semi-automatic weapon that was registered to him, the sheriff told CNN Tuesday morning.

Prior to this week, he "wasn't a red flag," Corpus said. "There was nothing that would have kind of elevated or raised us to have any concern with him at this time, prior to this incident."

"This is one of these issues where someone snaps, unfortunately, and innocent people were killed," the sheriff said, adding the attack should elevate discussions around mental health. "We just have to look at it from a multi-pronged approach, because it's not just the guns, it's also the individuals that have access to guns and those individuals that are suffering from mental illness or mental stressors," she added.

An employee of the mushroom farm still working to come to terms with the violence that unfolded told CNN he ran for cover when the suspect opened fire and then saw the shooter flee the scene on a forklift.

"I'm still scared trying to figure out what happened," said the employee, who asked not to be named because of the ongoing law enforcement investigation. "I don't understand."

The employee estimated that roughly two dozen people work at the farm. About half a dozen are Chinese while the rest are Latino immigrants and the two groups often communicate through hand gestures or a translator because of language barriers, he said.

The employee told CNN he and Zhao were coworkers at the farm and both were working on Monday. He said he had known the suspect for roughly six years and had considered him to be "very friendly" and a "nice guy," adding he didn't know what may have prompted the attack.

When he heard gunshots, the witness said he tried to hide with several other coworkers, worried that the gunman may shoot in their direction. Then, the employee ran to one victim outside of a greenhouse, but saw how much the individual was bleeding and realized "it was too late."

When the gunfire stopped, the witness told CNN he saw the suspect drive away from the scene on a forklift.

California Gov. Gavin Newsom was at a hospital meeting wounded victims of the Monterey Park shooting when he was "pulled away to be briefed about another shooting -- this time in Half Moon Bay," he said.

In a news conference on Tuesday afternoon, Newsom said the "one common denominator" in mass shootings is guns, adding "39 now of these mass shootings and we're only on day 24 of the new year."

"What the hell is going on?" the governor said. "Only in America."

President Joe Biden reiterated his call for Congress to "act quickly" and ban assault weapons. "We know the scourge of gun violence across America requires stronger action," he said in a statement Tuesday.

The mayor of Monterey Park, still dazed by the slaughter in his city, gave his condolences to those grieving in Half Moon Bay.

"I know what is in store for them in the next few days," Mayor Henry Lo said, offering his support during their "long road of recovery."

The Half Moon Bay community must unite in healing -- and support each other to address gun violence -- San Mateo County Supervisor Ray Mueller said.

"There were farmworkers affected tonight; there were children on the scene at the incidents. This is a truly heartbreaking tragedy in our community," Mueller said.

Mueller spoke to the mental health toll the violence has unleashed in the community and urged people to seek help, especially as the city has been trying to recover from the impact of recent deadly flooding that stretched across large swaths of the state.

"This is something that we get to watch on the news. Never think that it's gonna come and hit home," Jimenez said. "Today, we are the news."

Correction: An earlier version of this story gave the wrong age for Chunli Zhao. He is 66.