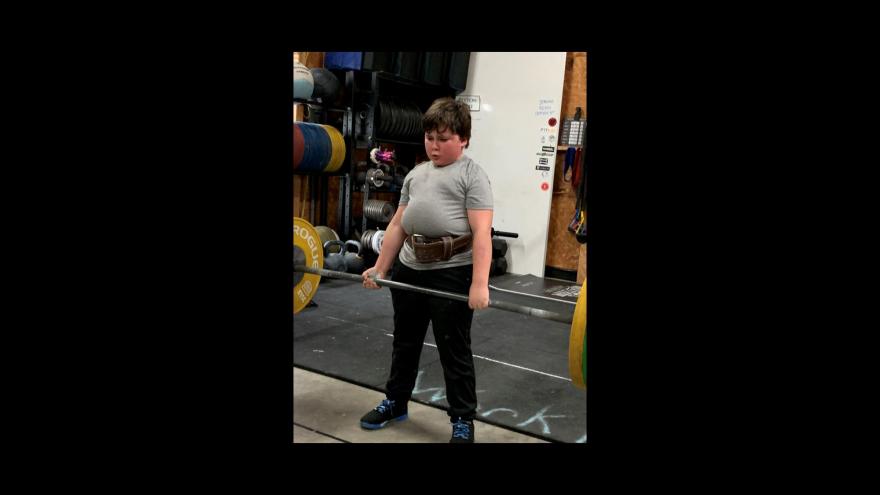 Tate says he hopes to set new records at a national championship in August.

(CNN) -- Nine-year-old Tate Fegley may stand at just 4 feet, 7 inches and 103 pounds, but he's already proving to be a force to be reckoned with in the powerlifting world.

With a deadlift of 230 pounds, bench press of 92 pounds and squat of 190 pounds, the boy from Minden, Louisiana, is crushing records left and right.

He started training just a year and a half ago, but he's already broken four American records for his age and weight class. At a state competition two weeks ago, Tate broke the records for squat, bench press, deadlift and total weight lifted all in one day.

"I just love the sport. I love the competition, too," Tate said.

While many of us may struggle to even get up in the morning, Tate hit the gym at 7 a.m. every day over summer break. Now, he works out after school, sometimes as long as three hours, according to his coach, Peyton Gray.

"He just wants to keep going. I never push him past where he won't keep going," Gray said. "I believe that's what sets him apart, just how much he's willing to work."

At powerlifting competitions, contenders get three attempts for each lift. Tate broke the deadlift record in his second try, and then in his third, he surpassed his own record. But unlike most people who would jump for joy or shout in happiness, Tate just wanted to keep going.

"Do you know what the first thing he said to me was? 'I wish we had one more attempt! I wanna go up!' Not even a 'Heck yeah.' He just comes to me when I'm sitting there about to jump through the roof and he's ready to go again," Gray said.

Tate's mother, Marla, said she didn't know it was a major talent at first, but he kept progressing.

"It's extremely amazing, especially when you go to a meet where other kids are lifting and you can see how much more weight he's lifting," she said.

And that weight isn't just unusual for a child to lift -- it could even be difficult for the average adult, according to Gray.

"I would say that your average adult male could probably deadlift and squat a bit more once they train a bit. But just coming to the gym, I doubt any adult male could come into the gym and safely lift that. (The adult) could hurt himself, but (Tate) can lift safely and efficiently."

Reports on whether lifting weights is safe for children are mixed. Limited research on the effects weightlifting has on prepubertal children has revealed that children have participated with few injuries, according to a study published by The American Academy of Pediatrics. But some parents worry it could cause serious strain to their muscles and stunt growth.

The key is having a proper coach, Gray said.

"Nine-year-olds can lift safely if their coach teaches them to," Gray said, adding that Tate has matured and started focusing better in school after he started to lift.

Tate says his next goal is to shatter more records at the Youth National Championship in August. He wants to deadlift 250, squat 215 and bench press 155.

The way to get there? "Hard work and commitment," Tate said.