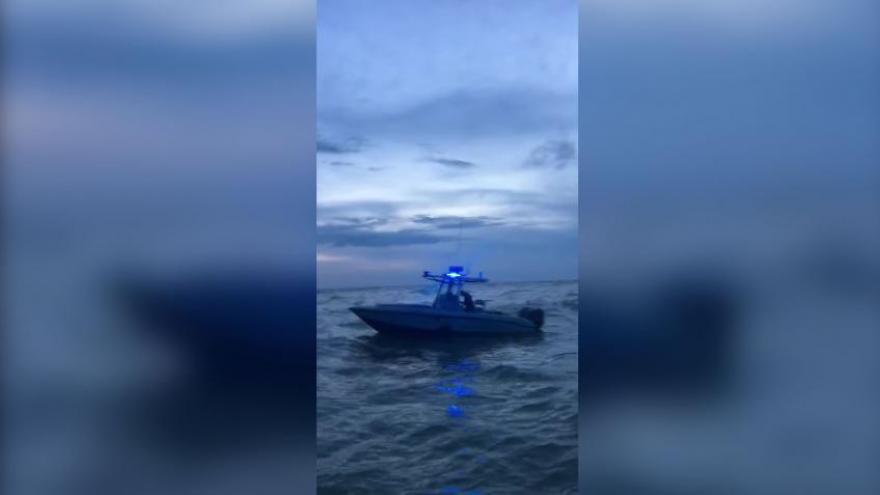 (CNN) -- When she went into the ocean and struggled to swim, a man saved his 8-year-old daughter and passed her to his wife. Moments later, he disappeared under the waves.

Thomas Zakrewski, 46, was visiting southwest Florida from Georgia with his wife and daughter.

The three were walking along a sandbar at Captiva Island near Fort Myers on Tuesday, the Lee County Sheriff's Office said in a statement.

His wife walked ahead of them but glanced back and saw Zakrewski and his daughter struggling in the Gulf of Mexico, police said.

The woman immediately jumped in, and her husband passed her the girl.

He struggled to stay afloat and stopped coming up for air, police said.

The sheriff's office said it deployed its marine and aviation units to search for Zakrewski, with additional crews from the US Coast Guard, the Florida Fish and Wildlife Conservation Commission and the Sanibel and Captiva fire departments.

He was probably caught in a powerful rip current, officials said

Gary Levine of the Lee County Sheriff's Office said it appeared that Zakrewski was caught in a rip current, a powerful and quick-moving channel of water common in the Gulf of Mexico.

Rip current deaths account for the majority of surf fatalities in Florida. In 2018, the National Weather Service reported, 27 people drowned in Florida currents.

Of the 28 rip current drownings reported across the country this year, 12 happened off Florida beaches. Zakrewski's death hasn't been added to the database.

The National Ocean Service advises swimmers caught in a rip current to swim parallel to the shore and back to land at an angle. Many make the mistake of trying to swim straight through the current, which can lead to fatigue and drowning.