A father says he put 1,000 miles on his car to find specialty formula for premature infant daughter 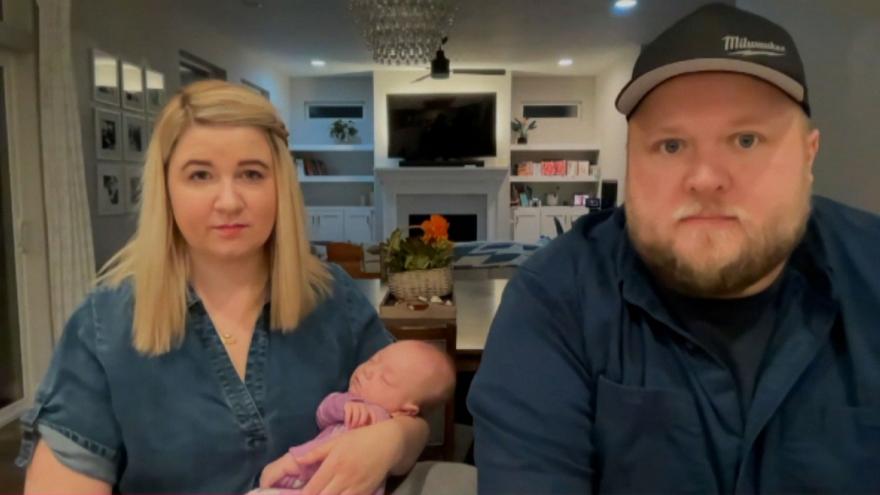 (CNN) -- Mac Jaehnert said he put 1,000 miles on his car in the last week looking for a specialty nutritional formula for daughter MacKenzie and other premature babies in his southeastern Washington state community.

"It's been a frustrating, heartbreaking, unnecessary challenge for a kid who has already overcome so much," Jaehnert told CNN Saturday, echoing the sentiments of parents caught up in a worsening nationwide baby formula shortage.

Jaehnert described empty store shelves in his search for Similac NeoSure in the city of Richland and surrounding areas -- part of a growing national crisis that has forced the Biden administration to order the use of military aircraft to expedite the delivery of baby formula to the United States.

Jaehnert and his wife, Emily, said they have been fortunate to receive donations of NeoSure after getting their story out but urged others to donate cans of formula to food banks to help meet the urgent demand across the country.

At Medical University of South Carolina (MUSC) Shawn Jenkins Children's Hospital, at least four babies were recently hospitalized due to complications from the ongoing shortage, according to spokeswoman Carter Coyle.

Coyle said three babies were hospitalized due to intolerance of formulas parents used because of the shortages; another was sickened by mineral imbalances from caregivers mixing their own formula.

Clinical dietitians at the hospital urged parents not to dilute formula or attempt to make their own, referring them to guidelines from the American Academy of Pediatrics.

In Memphis, Tennessee, a doctor at Le Bonheur Children's Hospital said this week that a toddler and a preschooler were admitted because the specialty formula they needed was out of stock and they couldn't tolerate replacements.

The baby formula shortage is affecting parents coast to coast, including those who choose not to or cannot breastfeed and those whose medically fragile children can't tolerate other nutrition sources.

Beyond scouring the internet, parents like the Jaehnerts tirelessly search store shelves daily. Others coordinate formula exchanges through Facebook pages and spend countless hours -- and sometimes huge sums of money -- to make sure their children have food.

MacKenzie Jaehnert was born three months early in December and weighed 2 pounds, 5.7 ounces, her father said on Twitter. She spent more than 100 days in the neonatal intensive care unit. Jaehnert said Saturday he and his wife are "terrified" at the prospect of transitioning "a kid who is just barely hanging on" to a new nutritional formula.

"I fear that she'll fall off of her growth chart more than she already is," Emily Jaehnert said of MacKenzie. "I fear that she will have an upset stomach, that it won't sit well with her, that she won't get the nutrition that she needs, that this particular formula right now is providing for her."

Officials in Washington are now confronting criticism that the U.S. Food and Drug Administration moved too slowly to address warning signs of the shortage. At the same time, they're attempting to learn whether formula companies are actually short on ingredients, while also trying to tackle potential price gouging.

At the heart of the crisis is a shuttered manufacturing plant in Michigan. The Abbott Nutrition plant, which is poised to restart production soon, closed after two babies who had consumed formula produced there became ill and died, prompting an investigation.

The closure exacerbated shortages caused by supply chain disruptions and highlighted how concentrated the formula industry is.

"I would really love for someone to figure out why we weren't warned as the parents of premature kids," Mac Jaehnert said Saturday. "This absolutely blindsided us... When did they know and why weren't we warned of this shortage, because it put a lot of families in a really devastating position."