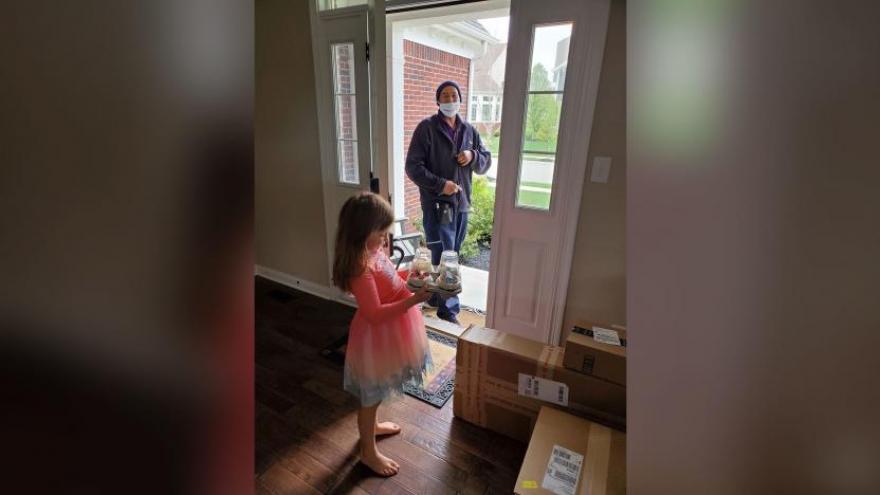 Jodan Price found out it was Emma's sixth birthday and came back with cupcakes.

(CNN) -- A sweet surprise from a FedEx worker made a little girl's birthday and started a friendship.

FedEx worker Jodan Price didn't know it was Emma Paternoster's sixth birthday until he came to the family's door in Fishers, Indiana, on April 30.

Liz Paternoster told CNN her daughter always answered the door, and was expecting to be met with a gift, but was disappointed it was a package for her father.

Price simply acknowledged the fact with a "happy birthday" before he went back to his car and drove away.

However, less than an hour later, according to the Paternosters, he returned with cupcakes from Dairy Queen for the birthday girl.

"I felt kind of bamboozled! We had never met him before this day," Paternoster said.

Her mother said all Emma wanted to do was show them to her sister and eat them.

"We told him he didn't have to do that, and he said ... 'She should be at her friends and her teacher today at school. I just wanted to do something a little more special because if we weren't in this situation, she'd be with her friends.'"

Paternoster said they are huggers and it was really hard to social distance.

Afterward, Paternoster said, she didn't know whether she had shown enough appreciation. During Emma's birthday parade, she tried to see whether any FedEx drivers was the man who dropped off the cupcakes, but they weren't.

Finding the identity of the sweet stranger

Paternoster then tweeted to FedEx to let the company know about his kindness and see whether she could find him. She said she didn't expect anything to happen.

The man's son, Austin Price, then saw the tweet from his former coach and sent his father's name to Paternoster.

Austin Price and Paternoster started messaging each other.

Jodan Price stopped by Tuesday and Paternoster and her two girls put signs on their door to share what his kindness meant to them.

"The best part of the whole thing is anyone who has reached out to me (has) said this does not shock them at all. He is just an amazing, kind, selfless man, and we were just blessed by his kindness that day," Paternoster said.

The families have talked about getting together and getting to know each other better after social distancing is over.

"He saw a little girl and wanted to make her day special, and we saw an angel of kindness," Paternoster said.

Metro Milwaukee business group calls for state to reopen May 11

Milwaukee homicide rate up 96% compared to this time last year