A small plane crashed into a backyard in Houston. All four people on board walked away 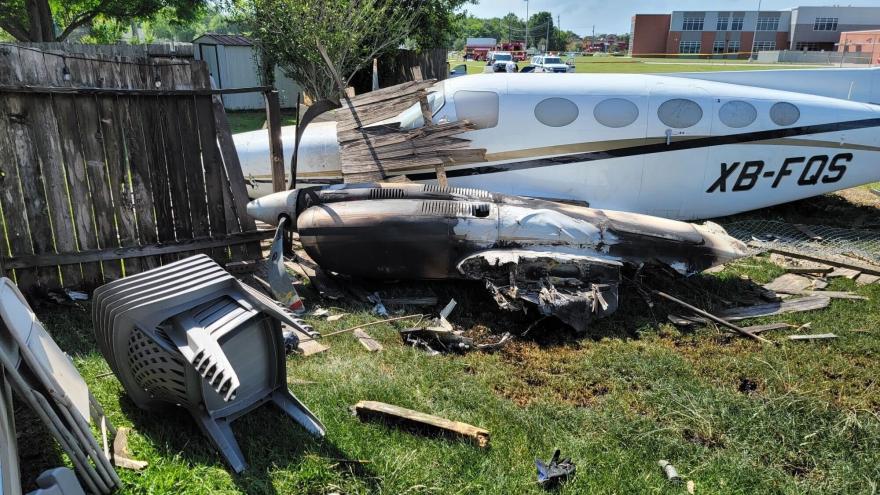 (CNN) -- A small plane carrying four people crashed into a backyard in Houston on Friday, and all four people on board walked away.

Officials responded to a report of a small-engine aircraft crash less than 10 miles from Houston's Hobby Airport around 4 p.m.

"Four civilians were aboard the aircraft at the time of the crash, all self-extricated, with no injuries reported," the Houston Fire Department said on Twitter. "Houston Fire received reports of a gazebo on fire. [Firefighters] arrived on scene quickly & extinguished the fire."

The Federal Aviation Administration (FAA) told CNN in a statement the plane, a twin-engine Cessna 421, crashed after departing from Hobby Airport at around 2:45 p.m. The plane, which is registered in Mexico, was headed to San Antonio International Airport, according to the statement.

Lalo Gonzalez was supposed to leave for a trip on Friday when he got a call from his brother-in-law telling him to rush over to his house. Gonzalez discovered a small plane had crashed just a couple of feet from his home.

"The turbine engine and the small plane landed about 13 feet from my home's back wall," he told CNN.

Aerial images captured by CNN affiliate KHOU showed the plane in a neighbor's backyard with a smashed wing, which had torn through a fence. Houston firefighters could be seen dousing flames in the gazebo.

In photos taken by Gonzalez, the plane can be seen looking largely intact with a charred turbine engine.

Initially, authorities would not allow Gonzalez into his home, which lost electricity, water and gas after the crash, he said. Once police let him and his wife enter for their belongings, they discovered the damage caused by the plane.

"My fence, the patio and all the lawn chairs are damaged," he said, adding a neighbor's whirlpool spa was "completely burned."

The National Transportation Safety Board will oversee the investigation and will provide additional updates, the FFA said.