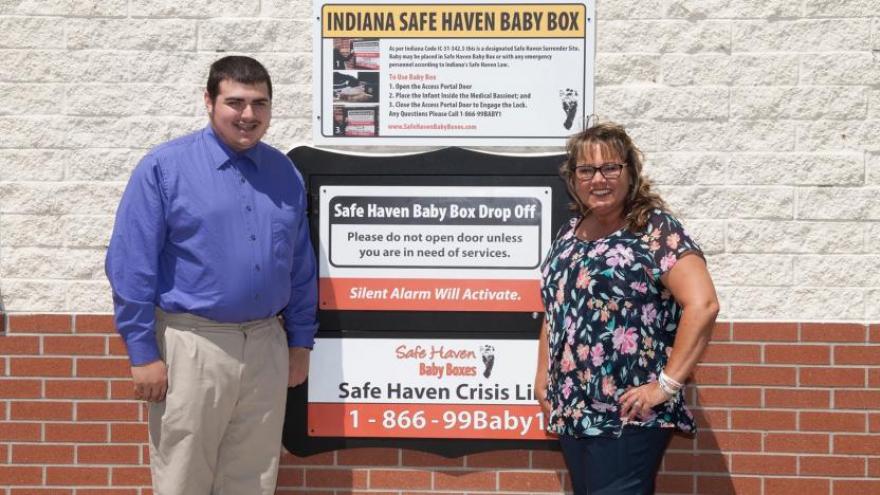 (CNN) -- An Indiana teenager is being honored after a distressed parent left a newborn child in a baby drop-off box he raised money to install.

Hunter Wart, 19, spent more than a year mowing lawns and scrapping metal to raise the $10,000 needed to purchase a Safe Haven Baby Box for the Seymour Fire Department.

Wart was a junior at Columbus North High School when he decided to raise the funds as part of his senior project.

"It was a lot of hard work," his mom Julia Kwasniewski told CNN. "A lot of blood, sweat and tears." Wart spent a lot of time collecting metal, which Kwasniewski helped him shuttle to a scrap yard.

The student's hard work paid off in June 2019, when the box was finally installed at the fire department. Such boxes are meant to prevent abandonment of newborns.

On Thursday, firefighters found a healthy baby girl inside.

The box saved her life

An alarm in the box alerted firefighters to the baby's presence within a minute of her arrival, said fire Chief Brad Lucas. She was only one hour old, he estimated.

"We are ecstatic that the system was used," Lucas told CNN. "It worked perfect, exactly how it was designed to work."

They provided care until an ambulance could shuttle her to a hospital. Once the baby is released, she will be in custody of state child services workers, officials said.

The Seymour Fire Department's box is one of 24 installed in several states since 2016 by Safe Haven Baby Boxes.

Monica Kelsey, founder of the nonprofit organization, began the initiative to give distressed mothers a safe place to drop off newborns while remaining anonymous.

Safe Haven Baby Boxes also installs safety drawers, which work similarly to the boxes, and runs a 24-hour hotline for mothers in crisis.

"These babies were left in trash cans and dumpsters. One was left at the door of a hospital. That baby had frozen to death before he was found," Kelsey told CNN.

"But this little girl [in Seymour] is going to grow up knowing how much her birth mom loved her just like I did."

Seymour Mayor Matt Nicholson honored Wart at a press conference on Friday, and presented him with a lapel pin as a token of appreciation.

"Here we are 224 days later and we've had our first baby saved by the box, and I think that's an awesome feat," Nicholson said, according to The Tribune newspaper. "I'm glad the city of Seymour and the council chose to get the box when they did."

While the community is in debt to Wart's efforts, he only asked for one thing in return: to name the child "Baby Mia."

She's been referred to as "Baby Mia" in news reports ever since.

"I'm hopeful that one day she will see the story of how she was safely surrendered in the Safe Haven Baby Box I raised the money for...and search online for me," Wart told CNN.

He's now trying to raise money to purchase another box for the city.

As for Kwasniewski, she's extremely proud of her son, and said she "would do it all again in a heartbeat, no question asked."

A 400-pound bear took a trip to a LA suburb, and residents were fascinated