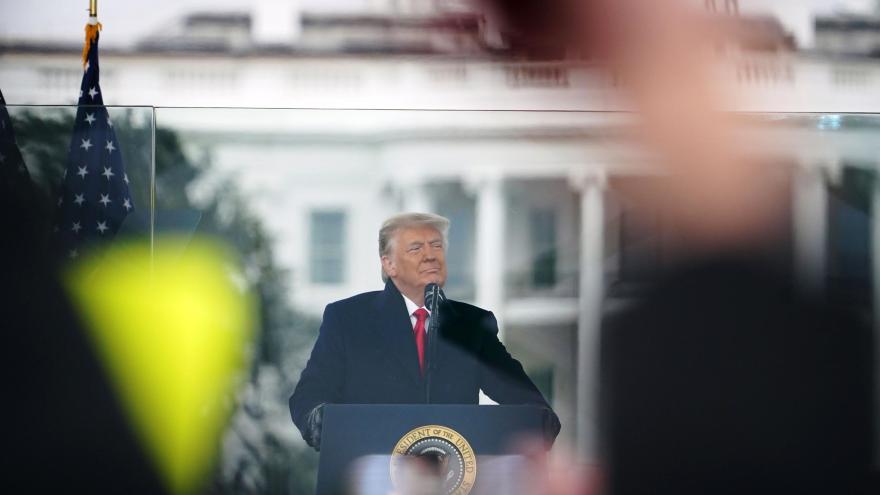 (CNN) -- Then-President Donald Trump angrily demanded to go to the US Capitol on January 6, 2021, and berated his protective detail when he didn't get his way, according to two Secret Service sources who say they heard about the incident from multiple agents, including the driver of the presidential SUV where it occurred.

The sources tell CNN that stories circulated about the incident -- including details that are similar to how former White House aide Cassidy Hutchinson described it to the House select committee investigating January 6 -- in the months immediately afterward the US Capitol attack and before she testified this week.

While the details from those who heard the accounts differ, the Secret Service sources say they were told an angry confrontation did occur. And their accounts align with significant parts of Hutchinson's testimony, which has been attacked as hearsay by Trump and his allies who also have tried to discredit her overall testimony.

Like Hutchinson, one source, a longtime Secret Service employee, told CNN that the agents relaying the story described Trump as "demanding" and that the former President said something similar to: "I'm the f**king President of the United States, you can't tell me what to do." The source said he originally heard that kind of language was used shortly after the incident.

"He had sort of lunged forward -- it was unclear from the conversations I had that he actually made physical contact, but he might have. I don't know," the source said. "Nobody said Trump assaulted him; they said he tried to lunge over the seat -- for what reason, nobody had any idea."

The employee said he'd heard about the incident multiple times as far back as February 2021 from other agents, including some who were part of the presidential protective detail during that time period but none of whom were involved in the incident.

The source added that agents often recounted stories of Trump's fits of anger, including the former President throwing and breaking things.

"Not just plates," the source added, a reference to how Hutchinson testified this week that she saw ketchup on the wall and a porcelain plate shattered on the floor of the White House dining room after Trump had thrown his lunch at the wall upon hearing about then-Attorney General William Barr telling a media outlet there was no widespread fraud in the 2020 election.

The other Secret Service source, who spoke to the driver and another agent who wasn't there, said he heard about Trump verbally lashing out at his detail but not about any physical altercation. Neither source told CNN they had heard about Trump trying to grab at the steering wheel.

Three of the people present for the encounter in the presidential SUV, a modified armored version of a Chevrolet Suburban were Trump, detail leader Robert "Bobby" Engel, and the driver whose identify is not publicly known at this time.

Hutchinson herself didn't see the incident firsthand. She testified at the select committee hearing on Tuesday that she was told about it by then-White House deputy chief of staff Tony Ornato. She said Ornato told her the story in front of Engel.

She testified that Ornato told her that Engel repeatedly informed Trump on their way back to the White House after Trump's Ellipse speech that it wasn't safe to go to the Capitol.

According to Hutchinson, Ornato recounted Trump screaming, "I'm the f**king President. Take me up to the Capitol now." Trump then "reached up toward the front of the vehicle to grab at the steering wheel," Hutchinson recalled Ornato saying. She added that, according to Ornato, Trump used his other hand to "lunge" at Engel.

Hutchinson also testified that Trump and her boss, the then-President's chief of staff Mark Meadows, were aware of the possibility of violence on January 6, 2021, and that Trump supporters had weapons when they gathered on the Ellipse that day.

Engel and Ornato have both testified to the committee behind closed doors, but their statements were not used in the hearing Tuesday.

Neither Engel nor Ornato have commented publicly on Hutchinson's testimony.

A separate Secret Service official previously told CNN that Engel denied that Trump grabbed at the steering wheel or lunged toward an agent on his detail, and that Ornato denied telling Hutchinson the same. The official did not dispute that Trump directed his agents to take him to the Capitol.

Ornato has a close relationship with Trump and his team, having previously served as head of his protective detail and then being granted an unusual leave from his Secret Service duties to be detailed to the White House as deputy chief of staff for operations.

Hutchinson's account of the alleged incident was among the most shocking portions of Tuesday's hearing -- adding to an already damning portrait of how Trump was desperate to get to the Capitol at the time.

Democratic Rep. Zoe Lofgren of California, a member of the committee, said that the agents can come to the panel and dispute the claims under oath.

"No one is denying that the President wanted to go to the Capitol where this armed mob was attacking the Congress and trying to overturn the election," Lofgren said in an interview on CNN's AC360 on Wednesday night. "That is the main point shocking as the story about the limousine lurch was. The real legal import was that he wanted to go up there and nobody is disputing that."

Rep. Stephanie Murphy of Florida, another Democratic member of the committee, said on NBC's "Meet the Press NOW" that "Mr. Ornato did not have as clear of memories from this period of time as I would say Ms. Hutchinson did."

"But we are always happy folks who have recalled things to come back and talk to us," she added.