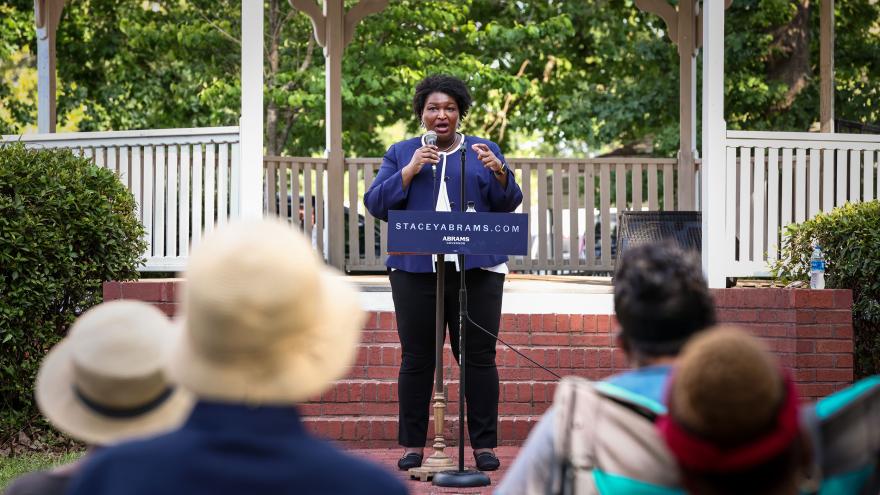 (CNN) -- In 2018, Stacey Abrams came within 1.4 percentage points of clinching the governor's mansion in Georgia. Her stinging loss to Republican Brian Kemp is still on the hearts of many of her most fervent supporters some four years later. Though Democrats across the country face a difficult midterm map this year, Abrams is likely their best hope to elevate a Black woman as governor for the first time in the nation's 246-year history.

"I am proud to be a Black woman whose experiences and whose qualifications and whose efforts can result in me becoming the governor of Georgia. It matters what we see," she told CNN on the campaign trail earlier this spring.

As a record number of Black women run for statewide office and Congress in the 2022 election cycle following the historic elections of Vice President Kamala Harris and more recently Virginia Lt. Gov. Winsome Sears, there is renewed hope that one of the candidates will finally ascend to the governorship in 2022.

So far in the 2022 midterm election cycle, a record 53 Black women have filed to run for statewide office with at least eight of them still in the running to be the first in US history to be elected to the governorship, according to a tally by the Center for American Women in Politics at Rutgers University (CAWP). There are also 145 Black women who have filed or indicated that they will run for Congress, CAWP told CNN -- a record after 130 Black women filed to run in the 2020 election.

But amid the optimism, challenges persist for these women running for governor, the majority of them Democrats. Some of them are running in deep-red states and face massive fundraising disadvantages against popular incumbents.

They also face a tough political season as inflation, high gas prices and President Joe Biden's low approval ratings threaten Democrats' narrow majorities in Congress. And yet many of them are committed to seeing their race through to the end, saying that the time for Black women to come to the forefront in statewide races is now.

Abrams said not only is she ready to be Georgia's next chief executive, but her candidacy speaks to the importance of representation.

"I grew up in a community where I did not see people who looked like me who are expected to be governor or mayor or the CEO of a company. My responsibility is to declare what is possible, but my obligation is to work to make it so," she said.

A former state House minority leader who did not have a large following outside of Georgia four years ago, Abrams is now one of the most popular and influential Democrats in the country. And her campaign has more resources this time around, according to a former aide.

"What has changed about her campaign is, simply, that they have more resources. So they have a larger budget, and they have a bigger spotlight," said Abigail Collazo, a spokeswoman for Abrams' campaign in 2018.

'I didn't see the support that you would typically see'

While Abrams has overcome fundraising hurdles and stands out as a candidate who could potentially win in the fall, other Black female gubernatorial candidates face a steeper battle in mostly red states.

DeJear, a businesswoman, and other candidates told CNN that fundraising has been challenging.

"We've been able to do a lot with a little and I think folks are accustomed to seeing women of color and women doing that, doing a lot with a little," said DeJear, whose campaign reported $419,000 in the bank in a filing earlier this month -- a haul dwarfed by Reynolds' $4.8 million. "But if we don't have to stretch ourselves that thin by having a fully resourced campaign, the sky's the limit."

She said it was hard to fundraise after launching her campaign in August because of local races taking place at the same time and the focus on Biden's Build Back Better priorities, adding, "I didn't see the support that you would typically see from a race, coupled with the fact that I am a Black woman."

This is DeJear's second bid for statewide office. She unsuccessfully ran for secretary of state in 2018 at the age of 32 but made history as the first Black candidate to be nominated by a major political party for a statewide office in Iowa. She pledges to improve the state's education system and access to mental health care if she is elected governor.

A poll by the Des Moines Register/Mediacom published in March found Reynolds leading DeJear 51% to 43%.

Some candidates also say a lack of support from the Democratic Party has been a hurdle.

Johnson said she was disappointed in the state's Democratic leadership for not supporting a candidate "who has made the most significant policy recommendation of this century with regard to cannabis in Oklahoma."

The Barbara Lee Family Foundation, a nonpartisan research group focused on women in politics, has consistently found that voters have been more comfortable sending women to the state legislature than they have been to executive offices.

"Historically, Black women haven't been recognized as viable candidates for these offices, and then their absence in these offices make it harder to break in the next cycle," Sanbonmatsu said.

"Informal gatekeepers," from donors to state party leaders, are often standing in the way of Black progress, she added.

"Before you would even throw your hat in the ring, you might test the waters, and try to get the nod from different sources, power brokers in the state. I think that's one area where Black women have been overlooked," Sanbonmatsu said.

When asked if the bleak midterm map Democrats are facing nationally is an added challenge for these candidates, Sanbonmatsu said it depends on the state.

"We do have differences there in terms of party dominance in different parts of the country. But absolutely, Black women candidates, like all candidates, are affected by partisan swings," she said.

Melanie Campbell, president and CEO of the National Coalition on Black Civic Participation, told CNN it has been harder for women of color to get support.

"When you look at any study around candidates and all that, it is, whether you are an incumbent, as a Black woman or other woman of color, it's still harder for them to get the resources," Campbell said. "So, it's a systemic problem that we are facing but ... in some places I think there is a potential for it to get better because the more that we run, the more that we push, the more that we crack those barriers, it will show us we can move and make more progress."

After more than a year on the campaign trail in Massachusetts, Danielle Allen ended her bid for governor in February shortly after state Attorney General Maura Healey entered the race.

While Allen acknowledged the challenges Black women -- and women in general -- face when running for governor, she said she was happy the Democratic Governors Association (DGA) doesn't pick sides in primaries and found its advice to be helpful to her campaign.

"I'm very proud of the fact that in the wake of my running for office, three more Black women chose to run for statewide office in Massachusetts, and all three of them have made it onto the ballot," Allen said.

'Black women have a voice'

In ruby-red South Carolina, which has not elected a Democrat to the governor's mansion since 1998, state Sen. Mia McLeod ran for governor as a critic of what she described as the "old guard" of state politics and on a platform that included better protections and pay for working people.

McLeod, who has served in the South Carolina legislature since 2011, told CNN she has a long track record of winning elections despite well-funded Republican opposition. But her winning streak was blunted earlier this month after she lost to former US Rep. Joe Cunningham in the Democratic gubernatorial primary.

Before her defeat, McLeod suggested her clear-eyed vision about her own electability was not shared by the mainstream media or the national Democratic Party apparatus.

But she acknowledged the political landscape has changed in some ways.

Jaime Harrison's run for US Senate in 2020 -- in which he shattered fundraising records before losing to GOP Sen. Lindsey Graham by 10 points -- offered a silver lining for future Black statewide candidates.

"We had at least a million registered voters who didn't vote and yet Jaime received more votes than any other Democrat who has run. The numbers are there, we just have to engage and mobilize voters to get them to the polls," McLeod said.

It's a strategy Abrams' campaign employed in 2018 with a strong focus on registering new voters and energizing and turning out base Democrats.

The DGA was the largest investor in that 2018 effort, spending over $4 million to help Abrams. This cycle, the DGA has contributed $1 million to One Georgia, Abrams' leadership committee. Separately, a DGA-affiliated group, America Works USA, said it invested $1 million on a nonpartisan advocacy campaign in March that focused on educating Georgians on policy issues.

While the DGA does not endorse in primaries, the group acknowledged it is aware of the general criticism of the largely White Democratic Party apparatus and suggested it is working to address concerns. The organization said it engages candidates from the moment they launch runs to offer political and financial expertise as well as access to donors.

"We know that Black women candidates in particular face huge obstacles in their campaign and we feel that there's more that can be done across the board to address that. The DGA feels really strongly about being part of the solution," DGA executive director Noam Lee said.

In Alabama, Flowers made history this month when she won the Democratic nod for governor in a runoff, becoming the first Black gubernatorial nominee for a major party in the state. Flowers, who is a heavy underdog against Republican incumbent Kay Ivey, told CNN her campaign has "struggled a lot" financially, but she said the lack of money hasn't stopped her drive or her belief that her presence in the governor's race is essential.

"It means that Black women have a voice. We have been used for so long," she said when asked about the record number of Black women running for governor. "This is the time. Isee God raising us up and not just Black women. Women."