Alec Baldwin: 'I would never point a gun at anyone and then pull the trigger, never' 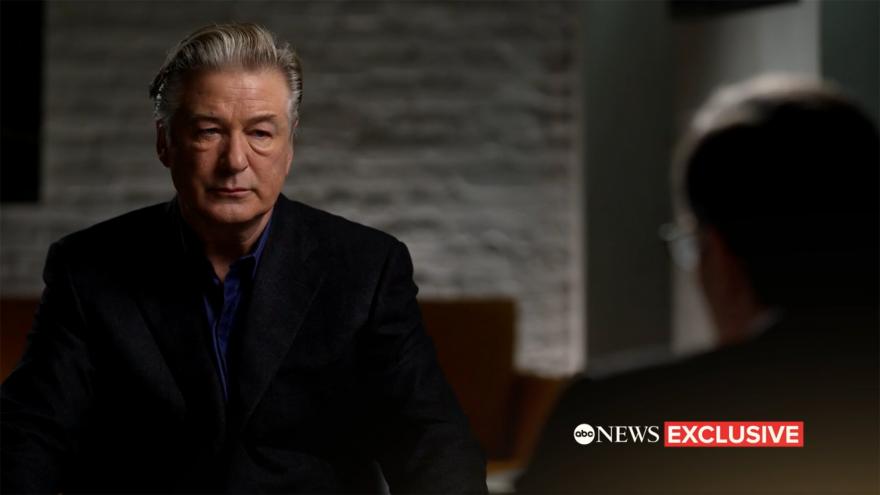 (CNN) -- In an interview with ABC that aired Thursday, Alec Baldwin shed light on what happened in the moments prior to the fatal shooting on the set of the film "Rust" that claimed the life of cinematographer Halyna Hutchins.

The actor explained to ABC's George Stephanopoulos that the scene being rehearsed in the church at Bonanza Creek Ranch in New Mexico was going to show him cocking the gun, and he and Hutchins were going over how she wanted to position his hand.

He said he was aiming the gun just off to the side of the camera, as Hutchins was instructing him to, in her direction.

"I'm holding the gun where she told me to hold it, which ended up being aimed right below her armpit, was what I was told," Baldwin said.

When asked why he pointed the gun at Hutchins and pulled the trigger when that wasn't in the script, Baldwin said, "I would never point a gun at anyone and then pull the trigger, never."

Throughout the hour-long sit-down interview -- his first since the October 21 shooting -- Baldwin stressed multiple times he wants answers to how a live round ended up on set.

"The gun was supposed to be empty; I was told I was handed an empty gun," Baldwin said. "There's only one question to be resolved ... only one. And that is, where did the live round come from?"

"Someone put a live bullet in the gun, a bullet that wasn't even supposed to be there. Where did that bullet come from? Somebody brought love rounds -- plural -- on to the set of the film and one bullet ended up in the gun," Baldwin said.

I think back and I think, 'What could I have done?'

An emotional Baldwin visibly fought back tears when talking about Hutchins.

Hutchins is survived by her husband, Matthew Hutchins, and their young son.

"I didn't know what to say," Baldwin recalled of meeting with Hutchins' husband after her death. "He hugged me and he goes, 'I suppose we're going to go through this together.'"

Baldwin added: "I told him, 'I don't know what to say, I don't know how to convey to you how sorry I am and willing to do anything I can to cooperate.'"

When asked by Stephanopoulos if the shooting was the worst thing that had ever happened to him, Baldwin said yes, "because I think back and I think, what could I have done?"

Baldwin also said he can't imagine doing a film with a gun in it again, adding, "I would do anything in power to undo what was done. I don't know how that bullet arrived in that gun. I don't know. But I am all for doing anything that will take us to a place where we're ... this is less likely to happen."