An Army lieutenant pepper-sprayed by Virginia police during a traffic stop was awarded $3,600 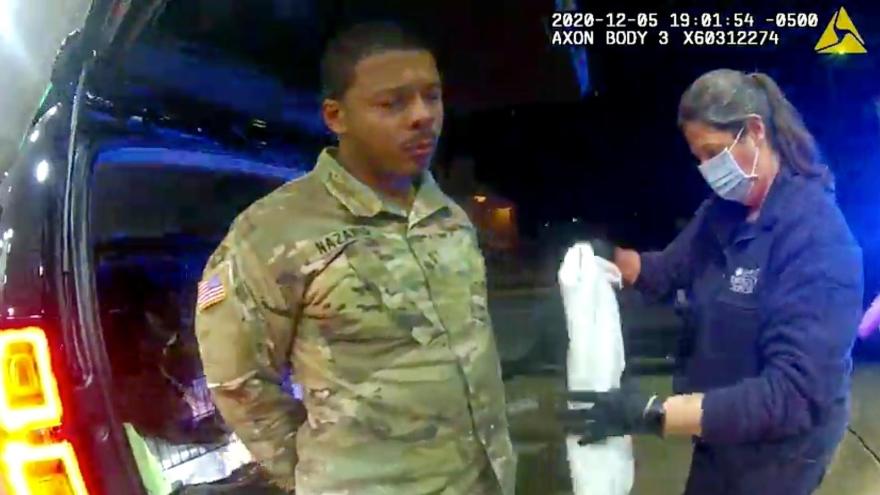 (CNN) -- A US Army officer who was pepper sprayed, pushed to the ground and handcuffed by Windsor, Virginia, police officers during a 2020 traffic stop was awarded around $3,600 Tuesday in a lawsuit that was seeking $1 million in compensatory damages.

Second Lt. Caron Nazario, who is Black and Latino, filed the suit in 2021 claiming that the two police officers violated his rights guaranteed under the First and Fourth Amendments during the traffic stop.

On Tuesday, Nazario was awarded $2,685 in compensation for damages after a jury determined former Windsor police officer Joe Gutierrez assaulted the Army officer. The jury also determined that Officer Daniel Crocker must pay $1,000 in punitive damages for an illegal search of his vehicle, court documents show.

The jury however largely sided with the officers, finding Nazario didn't prove other allegations in the suit, such as false imprisonment.

"We do think that there are appealable issues in this case, and we will take it up with the appropriate forum," Nazario's lawyer Jonathan Arthur told CNN affiliate WTVR outside the courthouse Tuesday.

Nazario's attorneys filed a motion for a new trial on Friday, according to court documents obtained by CNN.

The motion calls for a new trial on all claims except for the liability of assault against Gutierrez and the liability of the search against Crocker, the other officer involved in the 2020 incident.

Footage of the December 5, 2020, traffic stop -- which was captured by several cameras, including both officers' body cameras and Nazario's phone -- shows Nazario, who was in uniform, having guns pointed at him, being pepper-sprayed four times, wrestled to the ground and handcuffed.

The officers ultimately released Nazario and no charges were filed against him.

Crocker initiated the traffic stop after seeing a dark SUV "with dark tinted windows" and no license plate, police reports show. Nazario's lawsuit said the vehicle was new and he didn't have permanent plates yet, but he had "cardboard temporary plates" taped to the inside of the rear window.

In court, lawyers for the officers argued Nazario continued driving for 1.1 miles after Crocker initiated his lights and sirens and did not pull over at a number of potential locations, WTVR reported.

Nazario's lawsuit said he wanted to stop in a safe, well-lit place and pulled over at a gas station in Windsor, which is about 30 miles west of Norfolk.

Gutierrez was fired in 2021 following an investigation into the use of force during the incident and Crocker remains on the force.

An attorney for Crocker commended the jury's decision Tuesday.

"Thank you for a job well done, well-reasoned. They took a lot of time with this decision. They took half a day on Friday, they took the better part of the day today," Richard Matthews, an attorney who represented Crocker, told WTVR.

Last year, Special Prosecutor and Commonwealth's Attorney Anton Bell determined no charges should be filed against the officers in state court but formally referred the case to the US Attorney's Office for a federal civil rights investigation.