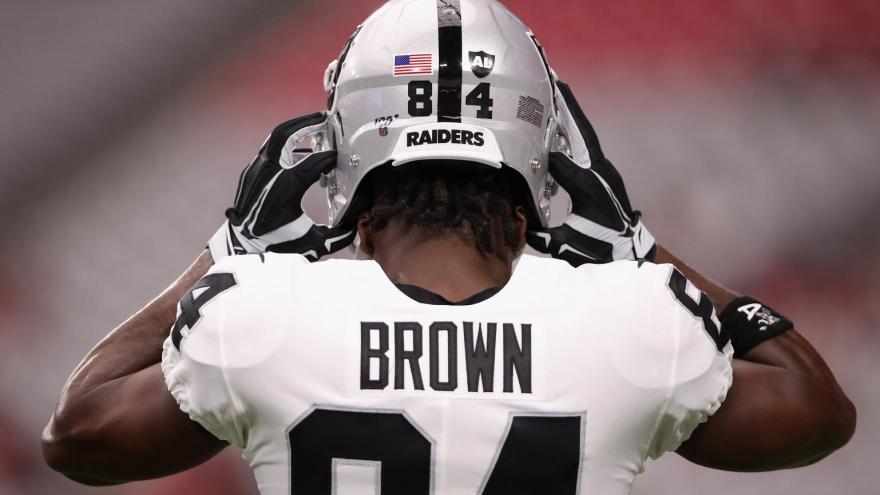 It's not clear whether the wide receiver -- who signed with the New England Patriots just eight days ago -- will take the field after his former physical trainer accused him or rape and sexual assault.

(CNN) -- Antonio Brown took the field Sunday in his first game as a New England Patriot, five days after he was sued on allegations of rape and sexual assault.

His appearance against the Miami Dolphins ended days of speculation over whether the NFL would keep him sidelined while it investigated the claims.

The Patriots wasted no time playing their newest wide receiver.

Brown caught all three passes thrown by quarterback Tom Brady on the team's opening drive. Later he caught his first touchdown of the season in the second quarter.

But off the field, Brown's accuser and the NFL are planning to discuss her allegations this week.

The lawsuit was filed Tuesday, three days after Brown signed with the Patriots.

Brown, 31, has denied the allegations.

What Brown and his accuser say

The lawsuit says Taylor, a former gymnast, and Brown met in 2010 when they were paired as Bible study partners at the Central Michigan University chapter of the Fellowship of Christian Athletes.

Taylor says Brown reached out to her on social media around 2013 to ask for photos of her. When she sent a photo of her face, the lawsuit says, he asked for something more revealing and she refused.

In 2017, Brown said he wanted Taylor to train him to improve his flexibility and ankle strength, the suit says.

Taylor said Brown sexually assaulted her twice in June 2017 and raped her in May 2018.

Brown's attorney said his client vehemently denies the allegations and believes Taylor is after his money.

"Mr. Brown, whose hard work and dedication to his craft has allowed him to rise to the top of his profession, refuses to be the victim of what he believes to be a money grab," attorney Darren Heitner said in a statement.

Brown and Taylor were in discussions about a settlement over an "extended period of time" before Taylor filed her lawsuit, according to a source close to the case.

The source would not detail how long the discussions lasted, but said such talks are not uncommon.

How the NFL could still punish Brown

Even though Brown doesn't face criminal charges, it's possible the NFL could discipline him after its own investigation into the claims in the civil suit.

Taylor's attorney, David Haas, told CNN his client will meet with the NFL this week.

The NFL adopted a much stricter policy against off-the-field violence after a 2014 incident involving Ray Rice, then a running back with the Baltimore Ravens, who was caught on a security camera punching his fiancée. The episode sparked widespread outrage.

The NFL's new policy calls for an independent investigation and adjudication in abuse cases, separate from law enforcement.

The league hired veteran prosecutors and investigators to see whether accused players should face discipline, even if no criminal charges are filed.