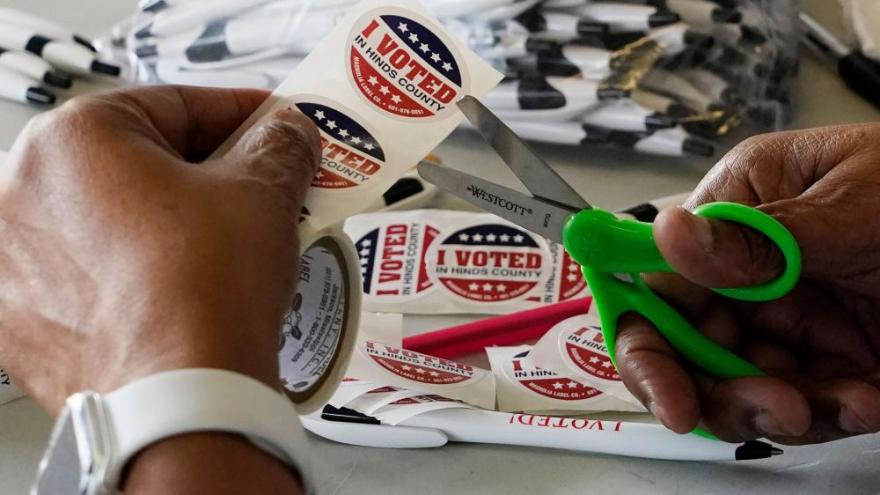 An appeal court on August 24 kept in place a Jim Crow-era voting restriction in Mississippi's constitution. According to both majority and dissenting opinions, the law was built with racist intent to keep Black people from voting.

(CNN) -- The Fifth Circuit Court of Appeals on Wednesday kept in place a Jim Crow-era voting restriction in Mississippi's constitution that removes voting rights from people convicted of certain felonies, ruling that the provision was created with racist intent -- but no longer operates in a racist manner in the state.

Section 241 in Mississippi's state constitution specifies 10 felonies—murder, rape, bribery, theft, arson, obtaining money or goods under false pretense, perjury, forgery, embezzlement or bigamy—for which a conviction will result in a person losing their right to vote. The law was instituted in 1890 and did not originally include rape and murder, but did originally include burglary. In its ruling, the court noted that the state designed the restriction to disenfranchise those convicted of "black crimes" but while maintaining voting rights for those convicted of "white crimes."

Amendments were made in 1950 and 1968, with the 1968 amendment adding rape and murder. Both amendments were voted on by Mississippians at the time. The 1968 amendment came after a 1965 federal civil rights commission criticized the racist crafting of the law and the state's "widespread racist voting practices at the time, saying the restriction had been designed to "accomplish the same result" as an "express denial" of Black citizens' voting rights, according to the ruling. The commission also criticized the provision for not including more serious felonies like rape and murder. In this most recent challenge to the law, Roy Harness and Kamal Karriem, two Black Mississippians convicted of forgery and embezzlement, respectively, who lost their right to vote in their conviction, filed suit in August 2019, and challenged their disenfranchisement under the equal protection clause.

According to both majority and dissenting opinions, the law was built with racist intent to keep Black people from voting.

"It is uncontroverted that the state constitutional convention was steeped in racism and that 'the state was motivated by a desire to discriminate against blacks' when the 1890 constitution was adopted," the court's 10-7 majority wrote in an unsigned opinion.

While the writing of the law was racist, the majority opinion found that because the law had been amended twice, which required approval by both the legislature and the electorate popular vote, it had been "reenacted" as recently as 1968, and no longer existed in the same context as its racist inception. The court determined that the 1968 rewrite had "removed the discriminatory taint" and cannot be overturned on the basis of racist intent that they acknowledged had informed ?an older form of the law. ?

"This provision was a part of the 1890 plan to take the vote away from Black people who had attained it in the wake of the civil war," Rob McDuff, director of the Impact Litigation Project at the Mississippi Center for Justice, the organization that represented Harness and Karriem in court, said in a statement after the ruling.

"Unfortunately, the Court of Appeals is allowing it to remain in place despite its racist origins," McDuff said. Despite this setback, he said they will appeal the ruling in the US Supreme Court.

The court found that while the law was crafted with racist intent, it has been amended, and plaintiffs had not proven that the current version of the law, enacted in 1968, had been "motivated by racism."

The three dissents filed by judges Jennifer Walker Elrod, Catharina Haynes, and James E. Graves Jr, note that the amendments being approved by popular vote may not necessarily be a mandate.

"The Mississippi electorate has never been asked to either remove or approve of eight of the nine original crimes. When burglary was removed in 1950, and when rape and murder were added in 1968, Mississippians were given only an 'up or down' option to approve § 241 as amended—not to approve § 241 as it then existed," Judge Elrod wrote in her dissent.

In his dissent, joined by judges Carl E. Stewart, James L. Dennis, Stephen A. Higginson, and Gregg J. Costa, Graves also argued against the majority opinion's assertion that because the law had been "reenacted" by the 1968 vote, it had been cleansed of its racist intent.

"Even if we engage with this faulty 'reenactment' ?theory, a cursory look at Mississippi's well-known history establishes a factual dispute on whether the legislature and electorate acted with discriminatory intent in 1968," Graves wrote.

"Even a cursory review of Mississippi history leading up to 1968 demonstrates that life for Black Mississippians in this era was little better than it had been for their grandparents in 1890," he wrote.