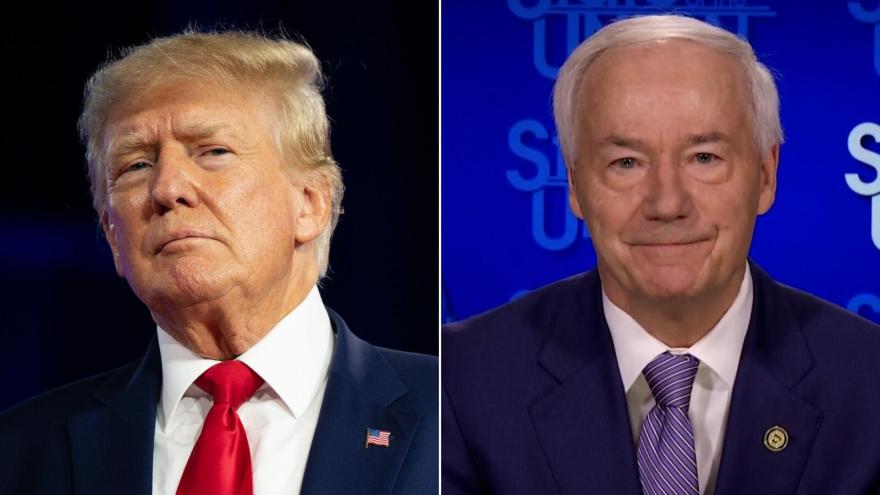 "No, I don't think it's a good idea for a leader that's setting an example for the country or the party to meet with (an) avowed racist or anti-Semite. And so it's very troubling and it shouldn't happen and we need to avoid those kind of empowering the extremes," Hutchinson told CNN's Dana Bash on "State of the Union." "You want to diminish their strength, not empower them. Stay away from it."

Trump had dinner at his Mar-a-Lago estate last Tuesday with both Fuentes and rapper Kanye West, who himself became engulfed in controversy after repeating antisemitic conspiracy theories and making other offensive claims last month.

The Anti-Defamation League has identified Fuentes as a White supremacist and he has been banned from most major social media platforms for his White nationalist rhetoric. Fuentes was present on the grounds of the US Capitol on January 6, 2021, and has promoted Trump's unsubstantiated claims about fraud in the 2020 election. The House select committee investigating the events of January 6 issued a subpoena to Fuentes in January.

Trump's meeting with the two figures has drawn intense criticism in recent days, with Hutchinson saying on Sunday: "Well, I hope some day we won't have to be responding to what former President Trump has said or done. In this instance it's important to respond."

Hutchinson, a former US Attorney in Arkansas, is term-limited and leaving office in January. He's currently mulling a 2024 White House bid, and he used Trump's controversial meeting to note his own record on such issues, telling Bash, "the last time I met with a White supremacist it was in an armed standoff. I had a bulletproof vest on. We arrested them, prosecuted them and sent them to prison."

During last week's dinner, Trump was engaged with Fuentes and found him "very interesting," a source familiar with the dinner said, particularly Fuentes' abilities to rattle off statistics and data, and his familiarity with Trump world. At one point during the dinner, Trump declared that he "liked" Fuentes.

Trump acknowledged the dinner in a post on Truth Social Friday stating: "This past week, Kanye West called me to have dinner at Mar-a-Lago. Shortly thereafter, he unexpectedly showed up with three of his friends, whom I knew nothing about. We had dinner on Tuesday evening with many members present on the back patio. The dinner was quick and uneventful. They then left for the airport."

Trump repeated later Friday that he "didn't know" Fuentes and had offered West business as well as political advice.