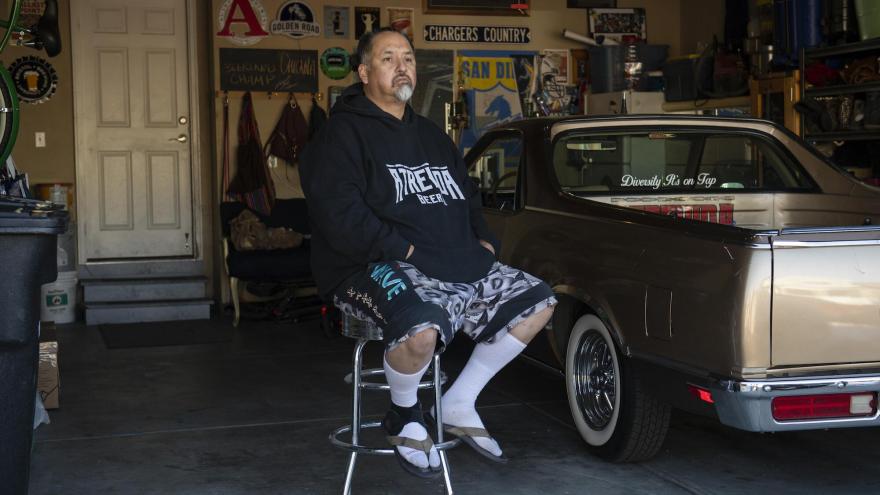 Richard Fierro at his hime in Colorado Springs, Colo., Nov. 21, 2022. Fierro, who served as an Army officer in Iraq and Afghanistan, moved through the chaos of the shooting this weekend, tackling the gunman and beating him bloody with his own gun.

(CNN) -- Thomas James, one of the two men who helped disarm a shooter during last week's mass shooting inside Club Q in Colorado Springs, issued his first statement about his role in the attack on Sunday.

"I simply wanted to save the family I found," James, a US Navy Petty Officer 2nd Class, said in a statement. "If I had my way, I would shield everyone I could from the nonsensical acts of hate in the world, but I am only one person. Thankfully, we are family, and family looks after one another. We came a long way from Stonewall. Bullies aren't invincible."

"I want to support everyone who has known the pain and loss that have been all too common these past few years. My thoughts are with those we lost on Nov. 19, and those who are still recovering from their injuries."

"To the youth I say be brave. Your family is out there. You are loved and valued. So, when you come out of the closet, come out swinging," he added.

James remains in stable condition at Centura Penrose Hospital, according to an update from the hospital. The hospital said he is focusing on his recovery and will not be conducting media interviews at this time.

The comments represent his first public statement since he and Richard Fierro, an Army veteran, helped take down a shooter firing at patrons at an LGBTQ nightclub in Colorado on November 19. Five people were killed and at least 19 were wounded in the attack, according to police.

The shooter was tackled to the ground by Fierro, who had been celebrating a birthday at the club with family and friends. Another person, identified by police as James, pushed a rifle out of the shooter's reach while Fierro struck and subdued the shooter with the other firearm they had, a handgun.

Fierro, who spoke to CNN's Jim Acosta on Saturday, has expressed his deep appreciation for the community's support as his family's brewery reopened the day after Thanksgiving.

"It was a beautiful, beautiful day," Fierro told CNN's Jim Acosta Saturday. "I couldn't thank enough people. I tried to thank everyone that walked through the door."

"I'm not a hero," Fierro added. "Everyone else in that room was a hero with us and everybody's got a hero story to just try and survive."

President praises Fierro for his actions

Fierro's daughter's boyfriend, 22-year-old Raymond Green Vance, has been identified by authorities as among those killed in the shooting. The suspected shooter is being held in custody without bond and faces five preliminary counts of first-degree murder and five counts of a bias-motivated crime -- elsewhere called a hate crime -- causing bodily injury, according to court documents.

Fierro told CNN Saturday he was "humbled" by the call.

"At the end of the day, I wish everybody could talk to him, and just to have that honor. I'm an old soldier, so for me just to talk to a commander-in-chief is a big deal," he said.

Biden told reporters Thursday he would again attempt to work with Congress to "get rid of assault weapons." When asked about the national conversation around firearms, Fierro said he has respect for such weapons from his training as a soldier and wants to see a different mentality regardless of where the gun debate turns next.

"I would just like people to stop having so much anger. It shouldn't be something this tense. There's no reason for somebody to go to a dance club or a show or anything and have to worry about being shot," he said.

For Friday's reopening of the Atrevida Beer Company in Colorado Springs -- of which he and his wife are owners -- Fierro said he was most heartened by those in attendance.

"It was more beautiful as a person to see the variance, the difference, the diversity, the inclusion of everyone there. Everybody in the same room just having some joy and enjoying a beer."