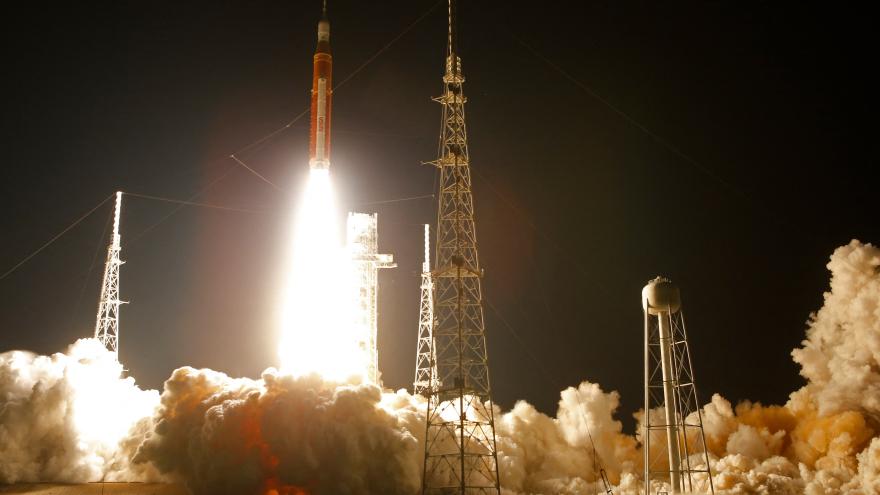 (CNN) -- The historic Artemis I mission took flight in the early hours of Wednesday morning after months of anticipation. The milestone event kicked off a journey that will send an uncrewed spacecraft around the moon, paving the way for NASA to return astronauts to the lunar surface for the first time in half a century.

The Orion spacecraft's spectacular first views of Earth were shared more than nine hours into the journey, with the vehicle about 57,000 miles away from our planet on its way to the moon.

It's the first time since the final Apollo mission in 1972 that a spacecraft designed to carry humans has captured a view of Earth.

The towering, 322-foot-tall (98-meter-tall) Space Launch System, or SLS, rocket lit its engines at 1:47 a.m. ET. It emitted up to 9 million pounds (4.1 million kilograms) of thrust to haul itself off the launchpad in Florida and into the air, streaking vibrantly across the night sky.

Atop the rocket was the Orion spacecraft, a gumdrop-shaped capsule that broke away from the rocket after reaching space. Orion is designed to carry humans, but its passengers for this test mission are of the inanimate variety, including some mannequins collecting vital data to help future live crews.

The SLS rocket expended millions of pounds of fuel before parts of the rocket began breaking away, and Orion was left to soar through orbit with just one large engine. That engine then set off two powerful burns to put the spacecraft on the correct trajectory toward the moon. Then, about two hours after liftoff, the rocket engine also fell away, leaving Orion to free-fly for the remainder of its journey.

Nearly eight hours after launch, Orion experienced its outbound trajectory correction burn, a mission milestone that ensures the spacecraft stays on the right path. The burn sets Orion up for its lunar flyby and closest approach of the moon on November 21 before entering a distant retrograde orbit around the moon on November 25.

Orion will come within about 60 miles (96 kilometers) of the lunar surface during its close flyby next week.

The spacecraft is outfitted with 16 cameras inside and outside to document different its trip around the moon from different perspectives. One image shared Wednesday showed Commander Moonikin Campos, one of the Artemis mannequins riding in the capsule, decked out in a survival suit.

Orion is expected to log roughly 1.3 million miles (2 million kilometers), taking a path that will lead it farther than any other spacecraft designed for human flight has traveled, according to NASA. After orbiting the moon, Orion will make its return trip, completing its journey in about 25.5 days. The capsule is then scheduled to splash down in the Pacific Ocean off the coast of San Diego on December 11, when recovery teams will be waiting nearby to haul it to safety.

Throughout the mission, NASA engineers will be keeping a close eye on the spacecraft's performance. The team will evaluate whether Orion performs as intended and will be ready to support its first crewed mission to lunar orbit, which is currently scheduled for 2024.

This mission also marks the debut flight of the SLS rocket as the most powerful ever to reach Earth's orbit, boasting 15% more thrust than the Saturn V rocket that powered NASA's 20th century moon landings.

And this mission is just the first in what's expected to be a long series of increasingly difficult Artemis missions as NASA works toward its goal of establishing a permanent outpost at the moon. Artemis II will follow a similar path as Artemis I but will have astronauts on board. Artemis III, slated for later this decade, is expected to land a woman and a person of color on the lunar surface for the first time.

A long road to liftoff

The mission team encountered a number of setbacks in the lead-up to Wednesday morning's launch, including technical issues with the mega moon rocket and two hurricanes that have rolled through the launch site.

Fueling the SLS rocket with superchilled liquid hydrogen proved to be one main issue that forced NASA to wave off earlier takeoff attempts, but on Tuesday, the tanks were filled despite leak issues that halted fueling hours before launch.

Read more: The big numbers that make the Artemis I mission a monumental feat

To address that problem, NASA deployed what it calls a "red crew" — a group of personnel specially trained to make repairs while the rocket is loaded with propellant. They tightened some nuts and bolts to stop the fuel leaks.

"The rocket, it's alive, it's creaking, its making venting noises — it's pretty scary. So ... my heart was pumping. My nerves were going but, yeah, we showed up today. When we walked up the stairs. We were ready to rock and roll," red crew member Trent Annis said in an interview on NASA TV after launch.

Other NASA personnel at the launch site's firing room, where agency officials make crucial decisions in the hours and moments before liftoff, celebrated a victory.

"Well for once I might be speechless," said Artemis I launch director Charlie Blackwell-Thompson, the first woman to hold such a role.

Blackwell-Thompson then declared it was time for tie-cutting, a NASA tradition in which launch operators snip off the ends of their business ties. Blackwell-Thompson's was cut by shuttle launch director Mike Leinbach, and she pledged to the others in the room, "I'll stay all night if I have to. It'll be my pleasure to cut ties."

Several astronauts were on-site for the launch, and NASA administrator Bill Nelson told reporters that he watched liftoff from a nearby rooftop with a few of them.

"There were a bunch there that would like to be on that rocket," Nelson said.

INTERACTIVE: Trace the path Artemis I will take around the moon and back