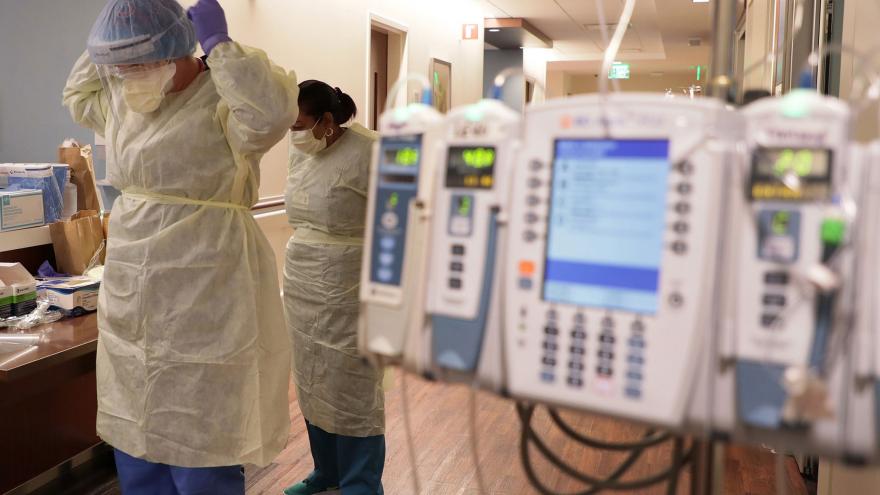 (CNN) -- While researchers gather more information on the Omicron variant detected in at least 20 countries and territories, the present reality is that the Delta variant is still spreading across the US and putting a strain on already over-taxed health care systems.

In Michigan, Covid-19 hospitalizations are matching highs last seen in April 2020, shortly after the onset of the pandemic. At least nine hospitals were reporting 100% patient capacity as of Monday, according to state health data.

Michigan is one of several Midwest states that are seeing the highest rates of infection in the US, including Minnesota and Wisconsin, according to data from Johns Hopkins University.

The catalyst for the decision in Monroe County, New York, is the dramatic rise in Covid-19 hospitalizations, the increasing number of occupied ICU beds "and the resulting impact on the ability of our hospitals to treat non-Covid-related acute care and emergency cases," county executive Adam Bello said in a statement.

Preemptive vaccinations and booster shots for those inoculated remain the best defense for those infected with the coronavirus. And officials are beseeching citizens to get their first doses or boosters to help stave off severe symptoms.

While an increase in booster demand has been noticed -- with lines out the door at some clinics in places such as Boston -- other areas have not seen the same urgency.

In West Virginia, Gov. Jim Justice said Monday only 31.8% of people older than 65 in the state have been boosted. Nationally, according to the US Centers for Disease Control and Prevention, around 44% of seniors have received a booster shot.

"Those people are exposed beyond belief. We know if they get (Covid-19) there's a good chance they die," Justice said, adding that the Covid-19 surge there "is taking a major toll" and is "still overloading" hospitals.

Around 59.4% of the total US population is vaccinated, and just over 1 in 5 fully vaccinated Americans have been boosted, according to CDC data.

While seniors are doing better with rates of boosters, some populations within that age range are lagging the national average, driving additional concerns about racial inequities in vaccine distribution and information. Black, Hispanic and Native American seniors' rates of booster shots trail the overall age group, according to the CDC.

With the uncertainty surrounding the Omicron variant and research on its risks still weeks away from completion, the strong immunity elicited from vaccines against earlier variants is one of multiple reasons why so many public health officials are pushing people to get vaccinated or boosted now, National Institutes of Health director Dr. Francis Collins said Tuesday.

"If Americans are tired of this and want to do something about it, as we are all tired of it, this is what you can do," Collins told CNN's Anderson Cooper. "If you are not vaccinated yet, start tomorrow."

Testing for Omicron ramps up

With the first US case of the Omicron variant now identified in California -- a finding announced Wednesday by Dr. Anthony Fauci, director of the National Institute of Allergy and Infectious Diseases -- health officials across the country are working to find further infections.

Local governments are already working to see whether infections are there. Florida's Miami-Dade County will begin to take random samples at its testing sites to identify variants, an expansion that was first explored during the Delta variant surge, according to the mayor's office.

Houston officials announced that the city's wastewater, which is already being tested weekly for variants, would include a search for Omicron in their findings.

While calling for a rapid increase in available tests for individuals, Admiral Dr. Brett Giroir, former assistant secretary of US Health and Human Services and the testing czar for Covid-19 during the Trump administration, said Tuesday the US has a lot more weapons to fight the coronavirus than at the start of the pandemic.

"We're going to war with this virus and we've been going to war with it for almost two years," Giroir told CNN's Erica Hill. "At first we had no weapons. The only thing we could do is, you know, really reduce social interactions. Now it's all of the above.

"Vaccines are the most important -- please, if you're not vaccinated, get vaccinated. Get your booster. We have monoclonal antibodies. We have oral antivirals. We have testing and we still have mitigation measures like masks. If you're in a high risk of transmission indoors, please wear a mask."

Health officials and researchers say determining the infectiousness or severity of the Omicron variant remains weeks away.

"We believe that it is too soon to tell of what the level of severity is," Fauci told a White House Covid-19 briefing Tuesday, adding that some South African physicians have reported the patients they treated had mild disease, yet they were treating young people. Covid-19 infections have generally been more severe for older individuals.

The variant has become the dominant variant in South Africa -- where scientists first discovered and reported it -- less than two weeks after it was first detected. By contrast, the Delta variant took a few months before becoming dominant there earlier this year. While travel bans have been enacted to prevent travel to South Africa and neighboring nations, many in the scientific community are crediting South Africa for its transparency.

Speaking in terms of how effective vaccines or boosters may be against Omicron, Dr. Peter Hotez, dean of the National School of Tropical Medicine at Baylor College of Medicine, said a decrease is expected but vaccines may still "cross-protect," as seen with prior variants.

"If there's a dramatic drop, that's one thing. If there's a modest drop, it means that the third immunization will hold and we won't need to make a specifically designed booster," Hotez told CNN's Ana Cabrera.

Warning that the unvaccinated will continue to be the most vulnerable to both Delta and Omicron, Hotez said, "I can see a scenario where we have both variants in the country where unvaccinated individuals are highly susceptible, and those infected and recovered could get reinfected with Omicron."