As record numbers of migrants arrive in New York City, officials say they are examining their legal options 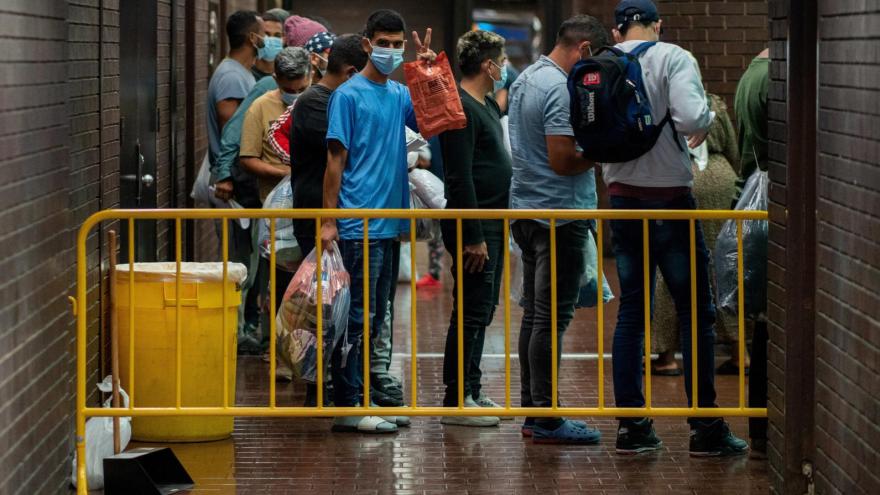 Migrants transported from Texas arrive at a bus terminal in New York City on August 25, 2022.

(CNN) -- As a record-high number of migrants were bused into New York City on Sunday, city officials are examining their legal options to respond to the waves of asylum seekers that continue to arrive in the city, officials said.

The city may not be aware of additional migrants who have arrived in recent days.

New York City Mayor Eric Adams said Monday that officials are assessing how they will respond to the influx of migrants, including examining legal options.

"Once we finalize how we're going to continue to live up to our legal and moral obligation, we're going to announce it. Until then, we're just letting people know what we're thinking of and how we're going to find creative ways to solve this man-made humanitarian crisis," Adams said at an unrelated event.

The mayor pointed to Texas Gov. Greg Abbott as being partly responsible for the current situation.

"I think the Governor of Texas and others are at fault for creating this man-made humanitarian crisis, that's what I think," he said.

Texas has spent more than $12 million busing migrants to Washington and New York, according to figures from the Texas Division of Emergency Management. As part of Gov. Abbott's response to the Biden administration's immigration policies, the state has bused more than 11,000 migrants to New York City, Washington, DC, and Chicago since August, Abbott's office announced last week.

Adams said he has spoken with the mayor of El Paso and told him New York City cannot accommodate this many asylum seekers. The mayor also said the city has been in contact with Abbott's office, adding that the Texas governor and his team have not been open to communication.

CNN is reaching out to Gov. Abbott's office and the city of El Paso for comment.

Adams reiterated that New York City is still a sanctuary city, but stressed it is unable to handle such an overwhelming influx of migrants.

"We are not telling anyone that New York can accommodate every migrant in the city," the mayor said Monday. "We're not encouraging people to send eight, nine buses a day. That is not what we're doing. We're saying that as a sanctuary city with right to shelter, we're going to fulfill that obligation. That's what we're doing."

An asylum seeker died by suicide in a city shelter on Sunday, according to Adams, who said the woman was a mother.

The city was not able to provide details on the woman or her death, but Adams expressed that the death "just really highlights how this issue is real."

Our hearts break for this young woman and any loved ones she may have, and we, as a city mourn her. This tragedy is a reminder that we have an obligation to do everything in our power to help those in need," the mayor said in a statement released by his office.