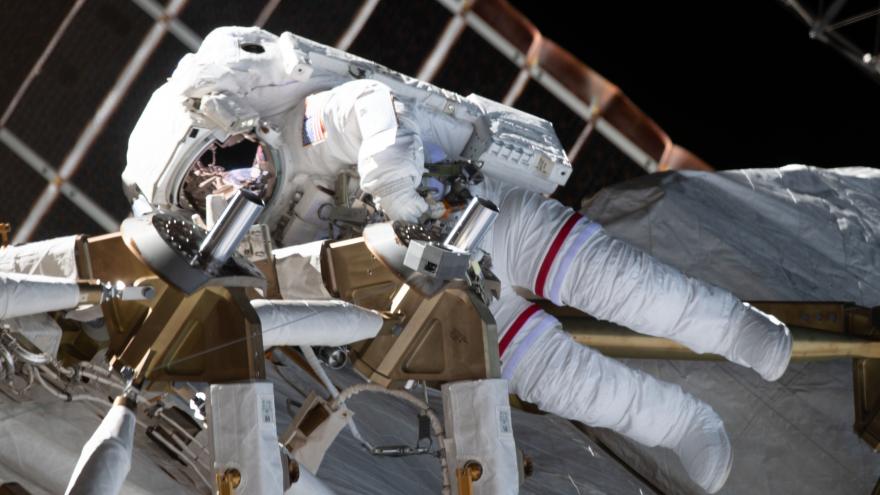 Kate Rubins, a NASA astronaut, and Soichi Noguchi, a Japan Aerospace Exploration Agency astronaut, began their spacewalk at 6:37 a.m. ET and it ended at 1:33 p.m., lasting for six hours and 56 minutes.

The spacewalk assisted with a continuation of upgrades for the orbiting laboratory.

Rubins just conducted a spacewalk alongside fellow NASA astronaut Victor Glover Jr. on Sunday. Prior to that, her previous two spacewalks occurred during her first rotation on the space station in 2016.

Noguchi had to wait a little longer to add a fourth spacewalk to his career. He previously conducted three spacewalks during his shuttle flight in 2005 to help with repairs to the space station.

Rubins was crew member 1 in the red-striped suit and Noguchi was crew member 2 in the stripeless suit. The new high-definition helmet camera on Rubin's suit provided crystal clear views of the astronaut's perspective as she worked outside of the space station.

During the spacewalk, Rubins noticed a "pinpoint" hole in her right glove, but no leakage was reported. The astronauts regularly check their gloves during spacewalks to look for any tears or holes.

The spacewalk was ended after the astronauts completed their tasks for the day, but approached the limit on the consumables of their spacesuits. It was not ended due to Rubin's glove, NASA said.

The spacesuits ensure that astronauts have water to drink, oxygen and proper pressure, but these consumables only last about the duration of an average spacewalk, which is six-and-a-half hours.

Rubins and Glover began preparation for upcoming solar array upgrades by assembling and installing modification kits on Sunday. While the station's current solar arrays are still functioning well, they are degrading. This degradation is expected because they only have about a 15-year life and were installed in December 2000 -- so they've outlasted the warranty, so to speak.

Rubins and Noguchi finished installing solar array modification kits Friday before moving on to some other tasks.

This was the 236th spacewalk in the history of the station.