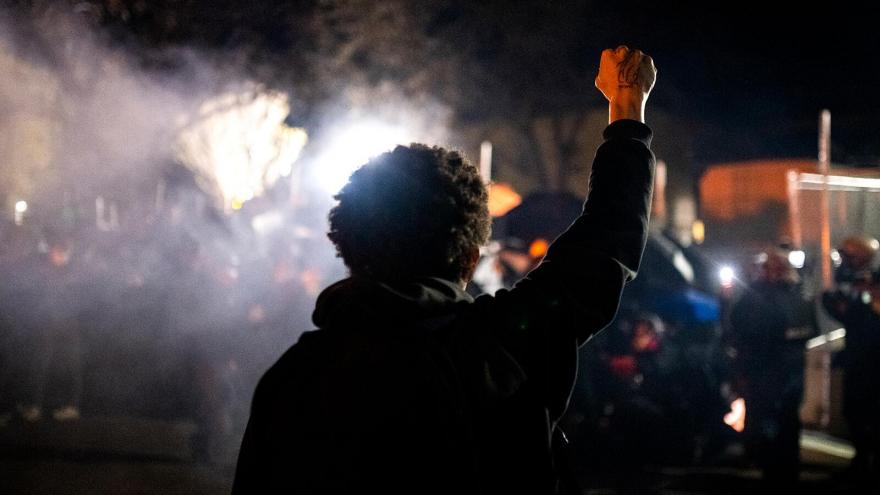 (CNN) -- As Daunte Wright's loved ones reflected on a son who will grow up without a father, a peaceful march and protest calling for justice in his death devolved into unrest and, authorities said, at least 100 people were arrested on Friday night.

That led the mayor of Brooklyn Center, Minnesota, to declare a citywide curfew from 11 p.m. CT on Saturday to 6 a.m. Sunday.

"Please ensure you are getting home in a timely manner before the curfew goes into effect," Mayor Mike Elliott said.

On the sixth night of protests, after Wright's family members remembered him, some demonstrators ignored the pleas for peace from community organizers and hurled bottles at officers.

Law enforcement declared the Brooklyn Center demonstration unlawful Friday night, when some in the crowd of about 500 people became disorderly, according to Minnesota Department of Public Safety Commissioner John Harrington.

Protesters have consistently shown up outside the police headquarters in Brooklyn Center since Wright was fatally shot by an officer in a traffic stop Sunday. Calls for justice, spurred on by the memory of Philando Castile and the trial of a former officer in the death of George Floyd just 10 miles away, have at times boiled over into chaos, capturing the anger of the community.

The scene Friday night was a major departure from the peaceful protests earlier that night and the two nights before. There was a man standing atop a car with a megaphone imploring the crowd to remain peaceful and not throw anything, but that plea did not stop some demonstrators from setting off fireworks and throwing items over the fence at the police.

Some demonstrators carried sheets of plywood, shields and containers of a liquid believed to be bleach, Harrington said Saturday.

Police issued a third dispersal order shortly after 10 p.m. after a group of people with baseball bats -- some wearing hockey gear and gas masks -- joined the demonstrators, according to Harrington.

Police moved in to make arrests and an 11 p.m. to 6 a.m. curfew was issued for Brooklyn Center.

Charges filed against the officer

The fallout from the fatal shooting of Wright has been swift after body camera footage was released the next day.

The officer who fired the shot, Kim Potter, resigned on Tuesday. She was arrested and charged with second-degree manslaughter Wednesday, and appeared in court on Thursday.

In Minnesota, second-degree manslaughter applies when authorities allege a person causes someone's death by "culpable negligence whereby the person creates an unreasonable risk, and consciously takes chances of causing death or great bodily harm to another."

Someone convicted of this charge would face a sentence of up to 10 years in prison and/or a fine of up to $20,000. CNN has sought comment from Potter's attorney, Earl Gray. Although Brooklyn Center is in Hennepin County, the case was given to Washington County prosecutors to avoid the appearance of conflict of interest, officials have said.

Potter posted bail and was released from custody, according to the Hennepin County Sheriff's official website.

Brooklyn Center Mayor Mike Elliott told protesters after Potter's arrest that they had been heard, but Whitaker is not convinced justice has been served yet.

"I am very upset, how he was killed, very upset that the officer is not charged, I guess in my opinion, more severely at this point. I hope that changes," Whitaker said.

"That's a lot that they took from me. I just hope that justice is served," said Wright's son's mother, Chyna Whitaker. "I'm just really hurt for my son because he doesn't have his father now."

How the incident unfolded

The incident began on Sunday when Wright was driving with his girlfriend to the house of his older brother, Damik Bryant.

Wright was pulled over for an expired tag, and officers learned he had an outstanding warrant, police said. The warrant was for a gross misdemeanor weapons charge, according to the news release from Washington County Attorney Pete Orput's office.

Wright called his mother before he got out of the car and before the shot was fired that would end his life.

On Monday, then-chief Tim Gannon released body camera footage, showing Wright standing outside his vehicle with his arms behind his back and an officer directly behind him, trying to handcuff him. An officer tells Wright "don't," before Wright twists away and gets back into the driver's seat of the car.

Orput's office said Potter "pulled her Glock 9mm handgun with her right hand and pointed it at Wright."

The officer whose camera footage was released is heard warning the man she's going to use her Taser on him, before repeatedly shouting, "Taser! Taser! Taser!" It's at this point that Orput's office says Potter "pulled the trigger on her handgun" and fired one round into the left side of Wright.

"Wright immediately said, "ah, he shot me," and the car sped away for a short distance before crashing into another vehicle and stopping," the release said.

Then, the officer is heard screaming, "Holy sh*t! I just shot him."

An ambulance was called and Wright was pronounced dead at the scene, Orput's release states.

Gannon said the portion of body-worn camera footage released Monday led him to believe the shooting was accidental and that the officer's actions before the shooting were consistent with the department's training on Tasers. Gannon later resigned from his position as police chief.

The Minnesota Bureau of Criminal Apprehension examined Potter's duty belt and found her handgun is holstered on the right side of her belt, while the Taser is on the left side, according to a news release from Orput's office.