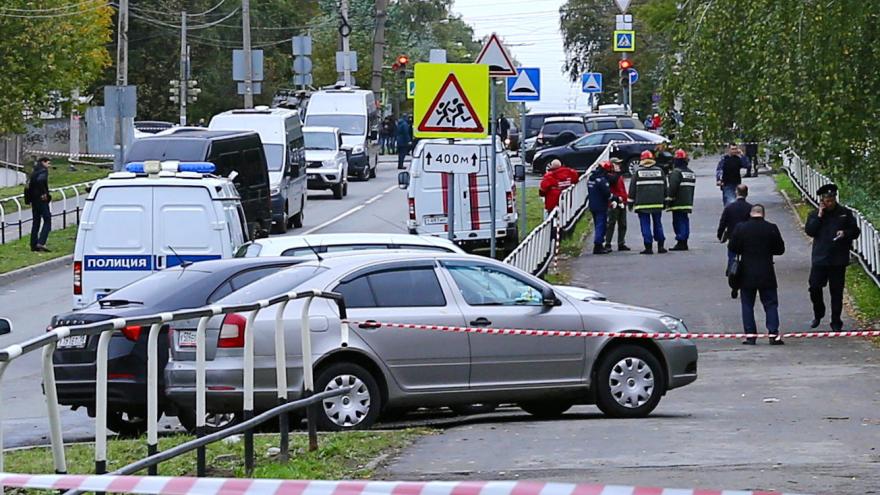 (CNN) -- At least seven children were killed when a gunman wearing Nazi symbols opened fire at a school in the western Russian city of Izhevsk, Russian state media reported Monday.

Thirteen fatalities have been recorded so far, according to state news agency TASS. Among those killed was the school's security guard, head of the regional government Alexander Brechalovn said in a video statement.

The shooter, who was reportedly wearing a black T-shirt with Nazi insignia and a helmet, died by suicide following the attack, according to TASS. Authorities are still working to identify the man they believe was responsible for the school shooting, as no documents were found on the suspect, the state news agency reported.

This is at least the second school shooting in Russia in the past two years. In May 2021, a gunman killed seven children at a school in Kazan, the capital of Russia's Tatarstan Republic.

Monday's attack took place at School 88 in Izhevsk, the capital of Russian region of Udmurtia. It has since been evacuated, Brechalovn said.

Izhevsk is home to more than 600,000 people, making it one of Russia's 20 most populous cities. It was founded as a steelworks settlement in 1760 and remains a prominent industrial center.

The city is perhaps best known as the home of the AK-47 rifle and the longtime residence of the Soviet lieutenant general credited with its development, Mikhail Kalashnikov.

Pyotr Ilyich Tchaikovsky, the composer of Swan Lake and The Nutcracker ballets, was born in the Udmurtia region.