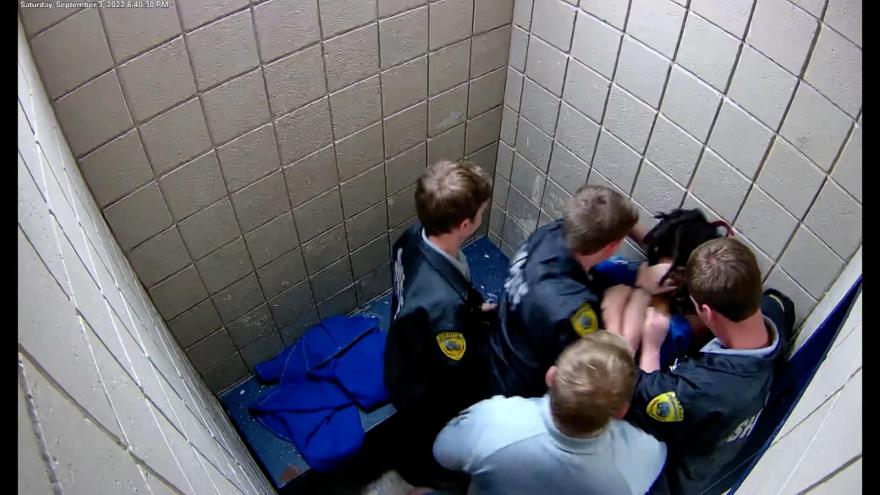 An attorney is calling for a criminal investigation after video shows officers beating a Black man while he was in custody at the Camden County Detention Center in Georgia.

(CNN) -- An attorney for a North Carolina man is calling for a criminal investigation into why his client, a 41-year-old Black man, was beaten while in custody at the Camden County, Georgia, Detention Center in September.

In a news release, civil rights attorney Harry Daniels says his client Jarrett Hobbs was "mercilessly" beaten by officers at the detention center.

Neither video provided by Daniels has audio, and it's not clear what happened prior to what is seen on the videos.

"This video is undeniable and the deputies' actions are inexcusable," Daniels said in the release.

Daniels tells CNN there is a third video from a different angle, which includes audio of the altercation. Daniels said they are not releasing that video at this time, and though it does not show the altercation, you can hear the interaction between Hobbs and the officers.

In the release, Daniels said Hobbs was suffering a psychological episode at the jail and asked to be placed in protective custody.

In a statement, the Camden County Sheriff's Office said, "Sheriff [Jim] Proctor has ordered an internal investigation of the incident to begin immediately. This investigation will include all recorded video from the time the inmate entered the facility on September 3rd, 2022 until his release on September 30th, 2022. If deemed necessary an additional agency will assist with the investigation."

"Internal investigations involve reviewing of videos, questioning of witnesses, and documentation of evidence recovered which takes time, and not completed overnight," the statement added. It did not release the names of the officers involved. CNN contacted the sheriff's office for more details but did not receive a response.

The Georgia Bureau of Investigation also announced Tuesday it will conduct an "independent & thorough investigation" of the incident following a request from Brunswick Judicial Circuit District Attorney Keith Higgins, the agency said on Twitter.

"Once the investigation is complete, we will provide the file to the Brunswick Judicial Circuit District Attorney's Office," the GBI said.

Hobbs violated his probation on a federal case out of North Carolina by being in Georgia where he was charged with speeding, driving on a revoked or suspended license and possession of a controlled substance, Daniels said.

In North Carolina court documents on his probation revocation, his probation officer, F.J. Carney, who was not present at the Georgia detention center, gave a narrative of the events that happened at the Camden County jail.

"While Defendant was in custody at the CCSO complex in Woodbine, Georgia, jailers heard a large banging from Defendant's holding cell. Defendant was reportedly kicking his cell door and was told by jailers to stop after already being warned to stop previously," the court document said.

"Officer Carney testified that Defendant apparently continued this kicking, resulting in the jailers approaching him, giving him verbal commands and putting his hands behind his back. However, Defendant allegedly did not comply and responded to the jailers saying 'I ain't doing sh*t.'. After the jailers reportedly continued to give him orders and approached him, Defendant tensed up, pulled away, and a physical altercation between Defendant and jailers ensued," the document continued.

"According to Officer Carney, Defendant resisted the jailers and subsequently punched one deputy in the face while punching another deputy in the side of his head. One deputy sustained a bruised eye and a broken hand as a result of the incident. Officer Carney did note that the report reflected that Defendant was struck in the head by one of the correctional officers, although Officer Carney is unaware of the exact sequence of events," it said.

Daniels is calling on the district attorney to bring charges.

CNN has reached out to the District Attorney for comment on the case and has not heard back.

Hobbs is in custody in North Carolina, his attorney said. Some information in this report was provided by CNN contributor Bakari Sellers, who is also representing Hobbs in this case.