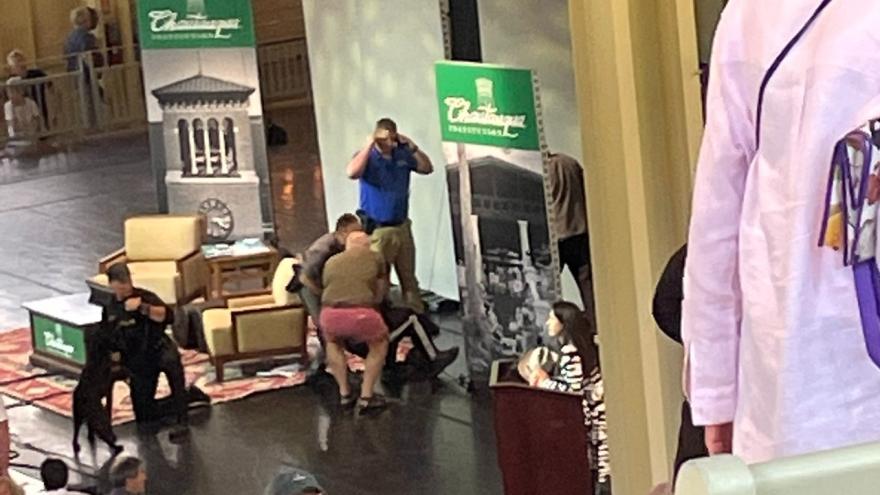 (CNN) -- Salman Rushdie -- a celebrated author and winner of the world's top literary prizes whose writings generated death threats -- was attacked and apparently stabbed in the neck on stage Friday before giving a lecture at the Chautauqua Institution in western New York, State Police said.

The attacker was taken into custody by a state trooper at the event, police said.

Rushdie was airlifted from a field adjacent to the venue -- in a rural lake resort about 70 miles south of Buffalo -- to a local hospital. His condition is unknown. An interviewer also suffered a minor head injury, police said.

New York Gov. Kathy Hochul told reporters Friday that Rushdie is "alive" and "getting the care he needs." She said a state trooper "stood up and saved his life and protected him as well as the moderator who was attacked as well.

"Here is an individual who has spent decades speaking truth to power," the governor said of Rushdie. "Someone who has been out there unafraid, despite the threats that have followed him his entire adult life it seems."

Rushdie was being introduced at about 10:45 a.m. when the assault happened, according to a witness, who said he heard shouting from the audience. He said a man in a black shirt appeared to be "punching" the author. The witness, who was 75 feet from the stage, did not hear the attacker say anything or see a weapon.

Some people in the audience ran to render aid while others went after the attacker, the witness said.

Another witness told CNN there were no security searches or metal detectors at the event. The witness is not being identified because they expressed concerns for their personal safety.

The witness said the attacker "walked quickly" down an aisle and jumped on stage, approaching the author and "making a stabbing motion with his hand repeatedly."

A third witness, a longtime Chautauqua resident who asked not to be identified, recalled a commotion on stage and a man making about seven to 10 stabbing motions in the direction of the author, who was in a half-standing position. She said she fled the open-air amphitheater "shaking like a leaf" in fear.

'His essential voice cannot and will not be silenced'

On its website, the Chautauqua Institution described Friday's event as "a discussion of the United States as asylum for writers and other artists in exile and as a home for freedom of creative expression."

In a statement the nonprofit education center and summer resort said it is "coordinating with law enforcement and emergency officials on a public response following today's attack of Salman Rushdie on the Chautauqua Amphitheater stage."

Writers such as Stephen King and JK Rowling expressed well wishes for Rushdie via Twitter.

Rushdie is a former president of PEN America, a prominent US free speech group for authors, which said it is "reeling from shock and horror at word of a brutal, premeditated attack."

"We can think of no comparable incident of a public violent attack on a literary writer on American soil," PEN America CEO Suzanne Nossel said in a statement.

"We hope and believe fervently that his essential voice cannot and will not be silenced."

The 75-year-old novelist -- the son of a successful Muslim businessman in India -- was educated in England, first at Rugby School and later at the University of Cambridge where he received an MA degree in history.

After college, he began working as an advertising copywriter in London, before publishing his first novel, "Grimus" in 1975.

Rushdie's treatment of delicate political and religious subjects turned him into a controversial figure. But it was the publication of his fourth novel "The Satanic Verses" in 1988 that has hounded him for more than three decades.

Some Muslims found the book to be sacrilegious and it sparked public demonstrations. In 1989, the late Iranian leader Ayatollah Ruhollah Khomeini called Rushdie a blasphemer and said "The Satanic Verses" was an insult on Islam and the Prophet Mohammed, and issued a religious decree, or fatwa, calling for his death.

As a result, the Mumbai-born writer spent a decade under British protection.

In 1999, Rushdie told CNN that the experience taught him "to value even more ... intensely the things that I valued before, such as the art of literature and the freedom of expression and the right to say things that other people don't like.

"It may have been an unpleasant decade, but it was the right fight, you know. It was fighting for the things that I most believe in against things I most dislike, which are bigotry and fanaticism and censorship."

The bounty against Rushdie has never been lifted, though in 1998 the Iranian government sought to distance itself from the fatwa by pledging not to seek to carry it out.