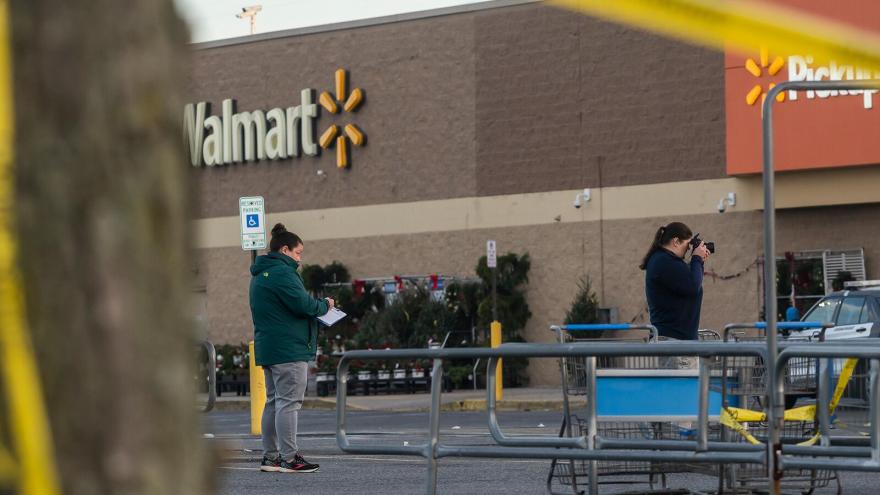 Members of the FBI investigate Tuesday's fatal shooting at the Chesapeake Walmart Supercenter on November 24, in Chesapeake, Virginia.

(CNN) -- The gunman in this week's deadly Walmart shooting in Chesapeake, Virginia, purchased the handgun he used the morning of the attack and left a "death note," outlining grievances against people in his life, city officials said Friday.

The note -- found on his phone -- talks about God, the holy spirit, and how the author felt his "associates" were mocking him. Walmart uses the term associates for some of its employees.

"The associates gave me evil twisted grins, mocked me and celebrated my down fall the last day. That's why they suffer the same fate as me," the note says.

"I wish I could have saved everyone from myself," the note continues. "My God forgive me for what I'm going to do."

The city released the note in a series of tweets, redacting the names of those mentioned by the shooter, who fatally turned the gun on himself after killing six people Tuesday at the store where he worked as an overnight supervisor. None of the victims in the shooting were among the redacted names, police said.

The gunman had no criminal history, the city said, adding the 9 mm weapon he used in the killings was legally purchased Tuesday. A search of his home yielded a box of ammunition and "various items in reference to the 9 mm handgun (box, receipt, other paperwork)," the city tweeted.

Asked if the gunman had ever complained about his colleagues, Walmart said, "There is nothing that can justify taking innocent lives. Our focus continues to be on the families who are grieving and supporting our associates through this difficult time."

Word of the note came as authorities continue looking for a motive in the mass shooting. Two employees remained hospitalized, one in critical condition, the city said Thursday.

"Today we are focused only on those hurt by Tuesday's tragic event, but the police investigation continues," Chesapeake officials said Thursday.

City council leaders will hold a special meeting Monday evening to confirm an emergency declaration which "will free up funding to support recovery" after the shooting, the city of Chesapeake said Friday on Twitter.

The Hampton Roads community where Chesapeake is located gathered at a growing makeshift memorial outside Walmart on Thanksgiving, praying for all victims but paying special attention to Fernando. Several in attendance knew the youngest victim, who had just started working at the store and used his first paycheck on a gift for his mom, loved ones told CNN affiliate WTKR.

"I'm out of words and speechless that it was him," friend Joshua Trejo-Alvarado said Thursday. "I was hoping everything was a dream until today. I wish he was still standing here with me."

Trejo-Alvarado didn't realize his friend was a victim until Wednesday morning, he said. He called and texted him from school, risking his phone being confiscated, and when he didn't respond, Trejo-Alvarado called his friend's brother, who delivered the grim news, he told the station.

"He would always be outgoing with anybody he met," Trejo-Alvarado told WTKR.

Mayor Rick West invited residents to a 6 p.m. vigil Monday to "honor the victims and grieve together." It will be held in City Park, a few miles south of the Walmart.

"Chesapeake is a tightknit community and we are all shaken," West said in a statement. "Together, we will support each other throughout this time."

Walmart shooting among a rash of violence

The tragedy, which came as many in the community were preparing to spend the holiday with family and friends, has unleashed an outburst of grief and trauma over the loss of loved ones in yet another mass shooting in the US.

Another Virginia community has also endured the pain of lives lost to gun violence. About 170 miles west of Chesapeake, a 22-year-old student at the University of Virginia in Charlottesville has been arrested and charged after opening fire on fellow students November 13, killing three of them on a bus returning to campus from a field trip to Washington, DC.

A Colorado community has also been mourning since the weekend, when a 22-year-old suspect shot and killed five people and injured 19 more at an LGBTQ nightclub in Colorado Springs, authorities said.

The shootings, among many others, have put the US on an ominous track to making 2022 the second-highest year for mass shootings on record, according to data from the Gun Violence Archive, a nonprofit which began tracking the instances in 2014.

President Joe Biden tapped the moment to decry the ongoing gun violence and urge Congress to work with him "to get rid of assault weapons," like the one used in Colorado.

"The idea we still allow semi-automatic weapons to be purchased is sick. It's just sick. It has no social redeeming value -- zero, none -- not a single, solitary rationale for it," Biden told reporters Thursday in Nantucket, Massachusetts, where he greeted first responders.

The Chesapeake shooting erupted suddenly, with witnesses saying they were in shock and disbelief when they saw the gunman -- a 31-year-old overnight team lead who'd worked at the store since 2010 -- pointing a handgun at them. He was armed with multiple magazines, police said.

"He came in there and just started spraying," Harper says in a video on social media.

Two slain victims and the shooter were found in the break room, another victim was found at the front of the store, and three others died at the hospital, Chesapeake city officials said. The shooter killed himself, police said.

Jessie Wilczewski, the mother of a 15-month-old, had started work at the Walmart only a few days prior and was attending a routine meeting in the break room just after 10 p.m. when she looked up to see the gunman in the doorway pointing his gun at co-workers, she told CNN. It didn't register as real until her chest vibrated, and her ears rang while the gunshots were erupting, she said.

The shooter left the break room area as she hid under a table, trying to stay quiet as co-workers lay still on the ground and in chairs. The sound of their blood hitting the floor continued to haunt her the day after the shooting, she said.

"I had to touch the door, which was covered (in blood), and I walked out the double doors to where you can see the aisles of Walmart," she said. "I just remember gripping my bag and thinking, 'If he's going to shoot me in the back -- well, he's going to have to try really hard because I'm running,' and I booked it."

"All of a sudden you just hear pa pa pa pa pa pa pa," Tyler said. "There were people just dropping to the floor. ... Everybody was screaming, gasping, and yeah, he just walked away after that and just continued throughout the store and just kept shooting."