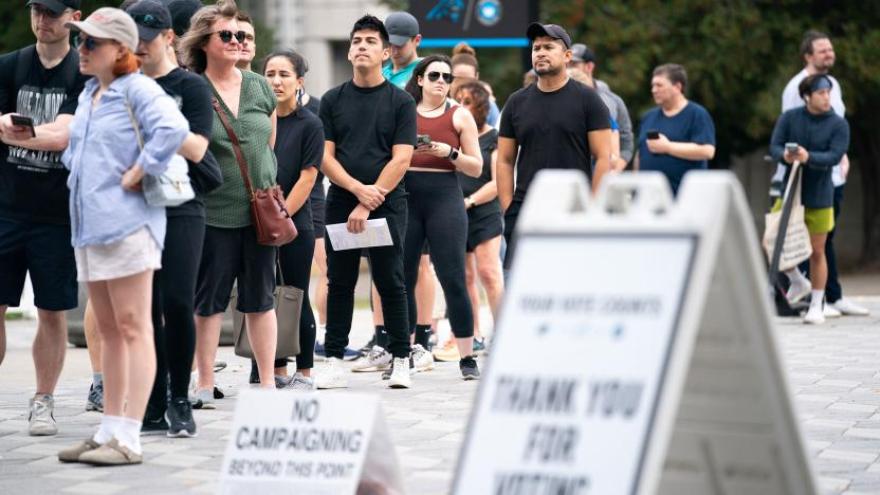 People wait in line on the final day of early voting at a polling location at Bank of America Stadium on November 5 in Charlotte, North Carolina.

(CNN) -- Scores of pre-election lawsuits have been filed in battleground states ahead of Tuesday's election, signaling the possibility of even more high-stakes and contentious court fights as voting wraps up and local officials start counting ballots.

Much of the current litigation focuses on the processes surrounding how votes are cast and counted -- with some lawsuits seizing on the same debunked conspiracy theories about election fraud that propelled the court efforts to overturn the 2020 election.

In all, 120 cases surrounding voting had been filed as of November 3 -- more than half of which have sought to restrict access to the ballot-- according to the Democracy Docket, a liberal-leaning voting rights and media platform that tracks election litigation. By comparison, 68 election lawsuits had been filed before Election Day in 2020, the group said.

"What we saw in 2020 was this effort to undermine the elections, but, for the most part, it happened after the elections," said Sylvia Albert, director of voting and elections at the organization Common Cause, which advocates on democracy issues. "This time what we are seeing is the prep beforehand."

Some of the cases have been brought by the same fringe legal groups that sought to bolster former President Donald Trump's bid to overturn his 2020 electoral loss.

But a significant portion of the pre-election litigation -- about 1 in 5 of the cases that seek new restrictions -- have been brought by state GOP committees or the Republican National Committee, according to Democracy Docket. The RNC has sought to build out its operations around monitoring elections after being sidelined from that work with a court consent decree that expired in 2018.

RNC officials say they are trying to ensure that their party has robust representation in how Tuesday's elections are run and the votes counted.

The court fights over the midterms may play a pivotal role in determining the winners in this week's elections and even, perhaps, the balance of power in Washington. They also could set the ground rules for the 2024 presidential election, as the parties and outside groups test their strategies for when Trump -- whose lies about a stolen 2020 election have shaped the current legal environment -- could be on the ballot again.

Fights over whether certain groups of ballots should count

A major focus of the pre-election litigation has been whether entire classes of ballots should be tossed, with many of the lawsuits alleging that ballots missing some information should be deemed invalid.

The most prominent case is a GOP-backed lawsuit in Pennsylvania, where Republicans targeted absentee ballots with missing or improper dates on the container envelopes. Last week, the state Supreme Court ordered those ballots to be kept out of the count, but deadlocked on the underlying legal question about their validity, leaving it unresolved. Over the weekend, local election officials in Pennsylvania began posting to their websites the names of thousands of voters whose mail ballots were now at risk of being rejected because of missing or incorrect dates.

"My concern is that the number of those undated mail ballots could exceed the margins in some of those races, which could create real problems," said David Becker, a former attorney in the Justice Department's voting section who now leads the Center for Election Innovation & Research. "It's better to resolve those disputes before you know the results and the margins. Once the margins are clear, that could create a political axe to grind."

RNC Chairwoman Ronna McDaniel said in a statement after the state Supreme Court ruling that it was a "massive victory for Pennsylvania voters and the rule of law" and a "milestone in Republicans' ongoing efforts to make it easier to vote and harder to cheat in Pennsylvania and nationwide."

Elsewhere in the country, disputes over the rules for counting certain ballots have played out in court.

In Wisconsin, a Republican lawsuit secured an order blocking state election guidance that told local officials that they could fill or correct certain information that was missing from absentee ballot certifications.

In a separate case, conservative activists say that they are asking for a court to segregate military ballots from the state's count, after a Milwaukee election official successfully requested ballots in the names of fictitious military members and sent them to a state senator. The lawsuit is being brought by lawyers who were involved in the push to reverse the 2020 election and whom continue to promote conspiracy theories about Trump's loss.

In Michigan, the Republican candidate for secretary of state is requesting that a court to throw out a large swath of absentee ballots in Detroit -- where the state's largest Black population lives -- on the claim that any absentee ballot not requested or returned in person to the clerk's office is unlawful.

Not all of the lawsuits have been successful. But even the cases that have failed to produce the orders that the challengers were seeking could be a source of post-election litigation, particularly if the margin of an election is close enough that the group of disputed ballots would make the difference.

Jeff Loperfido, a senior counsel at the civil rights group the Southern Coalition for Social Justice, pointed to a lawsuit where North Carolina Republicans failed to block state election board guidance barring the use of signature matching to verify absentee ballots.

Loperfido sees the potential that their allegations could lead to post-election challenges, brought through the state's administrative process for challenging ballots, alleging the ballots are invalid because the signatures don't match.

"Laying the foundation for citizen or organizational mass challenges is definitely something we have been keeping an eye on," Loperfido said.

The Republicans' lawyer in the in the case declined to comment.

This year, the Republican National Committee has engaged in a major drive to recruit Republican poll workers. And national and state GOP parties have gone to court to demand proof they are being hired. The fights have centered on the requirements imposed on poll workers and what records Republicans can obtain about the workers' identities, while other lawsuits have taken aim at the policies for poll observers.

Through litigation in Clark County, Nevada -- home to Las Vegas -- Republicans secured information and party affiliation of the workers staffing polling places, but their bid for a court order requiring that the county bring in more GOP workers was rejected.

And in Michigan, Republicans say they're appealing the dismissal of a case they brought against election officials in Flint, Michigan, alleging that the officials had not hired enough GOP poll workers for the election.

"Flint has over 80% Democrat inspectors, and over 90% Democrat inspectors for the Absentee Vote Counting Boards," said Michigan GOP spokesperson Gustavo Portela, who called the ratio "unacceptable." He pointed to a state law requiring that the party breakdowns for those workers to be as close to equal as possible.

In Maricopa County, Arizona, meanwhile, the poll worker litigation is two cases: one demanding more records one about poll workers hired and the county's efforts to increase the number of Republicans working voting sites; and a second challenging county requirements for poll workers that the GOP alleges is impeding the hiring of Republicans to staff election sites.

Bill Gates, chairman of Maricopa County's Board of Supervisors and a Republican himself, called the GOP legal effort a "political stunt."

"We have bent over backwards, and we were extremely responsive," Gates said. "And for some reason, there's certain people out there -- and I hate to admit it but Arizona Republican Party [Chair] Kelli Ward is one of them --- who's more interested in creating concern, distractions and disruptions in this election process."

CNN has reached out to the Arizona Republican Party, the lawyer representing the party and Ward for comment. More broadly, the RNC has defended the push in court as an effort to ensure that their party has robust representation in how Tuesday's elections are run and the votes counted.

"We are filing, and mostly winning, these lawsuits because counties in various states are violating the law, plain and simple," the RNC said in a statement to CNN. "Every decisive victory is a win for transparency at the ballot box."

Albert, of Common Cause, said that the demands around the country that more Republican workers be hired could be a precursor for attempts after the election to attempt to toss out ballots from election sites in dispute.

She said she's worried that Republicans "are going to basically say, 'If an election wasn't run exactly perfect -- if we didn't have an even split of poll workers -- then, all of those ballots don't count,' which is absolutely ridiculous and nonsensical. An election has never run perfect in the history of the world."

Western battleground states have become the sites of disputes over the technology that is used for voting, where outlandish theories about fraud in the 2020 election have manifested in pushes to conduct aspects of the midterm elections by hand.

A lawsuit in Oregon -- brought by an assortment of activists, GOP candidates for local office and affiliates of a county Republican party who claimed "a very organized criminal syndicate is intent on manipulating" the election -- unsuccessfully sought a court order that would have allowed the plaintiffs to access county voting software.

In Nevada and Arizona, disputes have erupted over efforts by Republican-led counties to take on what critics say is the cumbersome task of hand counting the general election ballots. The moves come after some Republican officials in these states -- including the GOP nominees for secretary of state -- have expressed distrust of electronic vote-tallying machines and have pledged to end their use.

The Arizona Alliance of Retired Americans, Inc. and a Democratic voter recently filed a lawsuit against officials in Cochise County, challenging the county's plan to hand count ballots as an audit of the electronic tabulators.

Cochise County, in southeastern Arizona, has more than 80,000 registered voters, and the county's actions come on the eve of the high-stakes election with competitive races for governor, a US Senate seat and the state elections chief on the ballot.

Cochise County Recorder David Stevens, one of the hand count's proponents, did not respond to a CNN request for comment. During a court hearing Friday, Stevens said he believed the county had the authority to proceed and said the count would involve about 40,000 ballots, according to The Arizona Republic.

Nye County spokesman Arnold Knightly said officials there still hope to revive the hand counting if the secretary of state signs off a new plan in which volunteers tally the results in silence. Like Cochise, Nye still plans to use electronic tallying machines in this election.

Critics of these parallel counts say they could, if allowed to proceed, set the stage for dueling results -- feeding further distrust of the election among some voters and the county officials charged with certifying the general election results in the weeks ahead.

Nevada counties must certify their results by November 18.