Baby formula shortage is easing for many, but it still isn't over 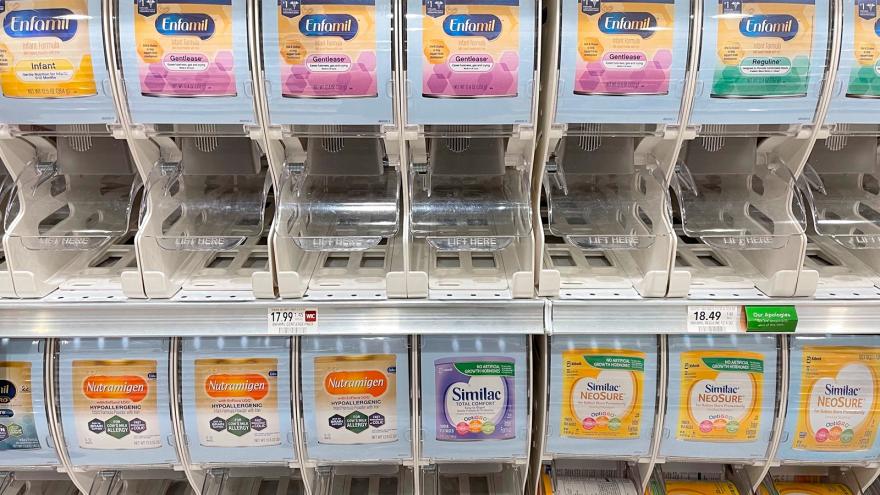 (CNN) -- About a month ago, Vicki Hankins and her husband were putting serious miles on their car while hunting for baby formula.

Now, instead of long drives every few days with uncertain results, they've been able to cut down to one long trip only once or twice a month. They don't worry any more about being able to find formula -- they just know they'll have to travel to get it.

Experts who are closely tracking the state of the ongoing baby formula shortage in the United States say stories like the Hankinses' are par for the course right now.

Formula availability is not back to normal, but for many families, it's better than it was even a month or two ago.

Before a nationwide infant formula recall by Abbott Nutrition in February and the subsequent shutdown of one of the company's major manufacturing plants, about 10% of infant formula products were typically out of stock, according to market research firm Information Resources Inc., known as IRI.

IRI's latest report says about 20% of all types of baby formula products were out of stock during the week ending July 24 -- the lowest out-of-stock rate since early June. Stock rates for powdered formula have been slower to recover. IRI data shows that about 30% of powdered formula products were out of stock the week ending July 24.

"There's no question that the situation where families are going into the store and finding absolutely no formula has gotten much better," said Dr. Steve Abrams, a neonatologist at the Dell Medical School at the University of Texas at Austin. "On the other hand, there are significant problems still in the system."

The US Food and Drug Administration commissioner said last week that formula production needs to continue at high levels for six to eight more weeks for supply to keep up with demand.

Programs designed to help families affected by the shortage are being extended, too.

Back in May, Abbott announced that in states where it held WIC contracts, it would cover the cost of switching babies to different brands through August 30 -- a signal that it expected the shortage could impact consumers for months.

Then in June, flooding from a storm again halted operations at Abbott's Sturgis, Michigan, facility, delaying its production ramp up. The Abbott plant is producing specialty Elecare formula again -- and shipping could begin "imminently" -- but the company has extended its rebates to states for another month.

Families who depended on certain formulas have already had to pivot to find new ways to feed their babies, and they may still have to use different formula brands, travel long distances to find it and adhere to stores' buying limits.

The Hankins' 9-month-old son, Orrin, is allergic to ingredients in standard baby formula and needs a hypoallergenic variety. He had been on Similac Alimentum, which is made by Abbott. By June, they were no longer able to find it in stores.

They could order it online, but it wasn't covered by benefits through Virginia's Special Supplemental Nutrition Program for Women Infants and Children, or WIC. When they got it from retailers like Walmart.com, they had to pay for it out of pocket -- an expense that strained the family's budget.

So, in July, Hankins worked with her state WIC program to switch her son to a different brand of hypoallergenic formula called Gerber Good Start Extensive HA, which is being flown into the US from the Netherlands. It's one of several overseas brands being sold in the United States since the shortage began.

Orrin had struggled to switch formula in the past, but he did great, Hankins said.

Still, the family travels about two hours round-trip from their home in Prince George County to get to stores that carry Orrin's new formula. But Hankins said she can always find the right one.

On their last trip, they found it at Kroger and Publix stores right next to each other and bought the maximum allowed: four cans at one store and three cans at the other.

"We got to use our WIC benefits for the month in one trip, which was great," Hankins said. "If I'm only doing that once or twice a month instead of every couple days, it really is such an improvement."

For families who can be flexible with the brands or types of formula they buy or the amount they can afford to pay, the shortage has eased considerably. But for others, the pain continues.

Hypoallergenic and easy-to-digest formulas are still in very short supply, and Abrams said families that need them face hardships. Hospital dietitians are scrambling to track them down for families. As soon as they find a formula that a baby can tolerate, it may run out before it's even delivered to the family's home. Then the process of prescribing and ordering starts all over again.

Families that depend on WIC program benefits have more limited choices, too. Not all stores accept their benefits, and not all states have given families the flexibility to purchase alternatives if their normal brand is out of stock.

Families in rural areas, who may have only one or two stores in their area that sell baby formula, may also be looking at long drives to find more if those stores run out.

The federal government has been working to alleviate the shortage. The US Food and Drug Administration eased rules allowing foreign manufacturers to sell their infant formula in the United States. In July, the agency said it was creating a framework to keep the door to foreign formula brands open permanently.

"There's a backlog that's having to be filled out, but we are seeing measurable improvement," Dr. Robert Califf, commissioner of the US Food and Drug Administration, said Saturday on NPR's All Things Considered. "There's more formula on the shelves, and the production now is exceeding the demand by a significant amount every week. So we're on the road to recovery, but I don't want anyone to think we are sitting back at this point."

He said that when consumers see empty spots on store shelves, it doesn't mean that type of formula is entirely out of stock, but certain sizes of it might be.

When formula manufacturers need to step up production, they cut back on the number of products they make to speed the process. "Whereas they may have, let's say, been making a 1-pound, 5-pound and a 10-pound pack, they may reduce to just one type so that they can be as efficient as possible in turning out the formula," Califf said.

The key now is to stay the course, he said.

"What we need is just to continue for the next six to eight weeks for the production to far outstrip the amount that people need for their babies, and then we'll be back in good shape with regard to the volume of formula," he said.

Still, the country is not quite out of the woods.

Abbott said in a statement to CNN on Monday that it will be shipping Elecare formula made at its Michigan plant "imminently," and it's working to restart Similac production "as soon as we can."

Late last week, the US Department of Agriculture told states it would continue to cover the cost of non-contract infant formula to give families that receive WIC benefits -- like the Hankinses -- flexibility to purchase alternate sizes, forms or brands of formula. The benefit will continue through the end of September.

Geraldine Henchy, director of nutrition policy for the nonprofit Food Research & Action Center in Washington, said that although the extension is good news, "It does indicate that they believe that action is still necessary."

About half of the baby formula bought in the US is purchased through the WIC program, and those families continue to be disproportionatelyaffected by the shortage.

"The infant formula system crashed, but for WIC, it really crashed," Henchy said.

The USDA has new powers through the Access to Baby Formula Act, which was signed into law in May. The agency recently announced that it would require state WIC programs to develop disaster plans in case of future baby formula supply disruptions.

The government is also making funding available to state WIC programs to speed the development of online ordering programs, since WIC families currently can't use their benefits for online purchases.

Vicki Hankins says she feels like the hardest days of the shortage are behind her.

She has begun to see her son's old brand, Alimentum, in stores closer to home, which has really helped ease her anxiety. She thinks that even if WIC stopped allowing her to use the Gerber Good Start Extensive HA, she could go back to what she was using before.

She knows that not every family has been so lucky. She hears from other moms on social media who are still struggling.

Henchy puts it another way: "I think it has really been traumatic for people."