Bar donates the $13,961 patrons stapled to the walls to Hurricane Dorian relief in the Bahamas 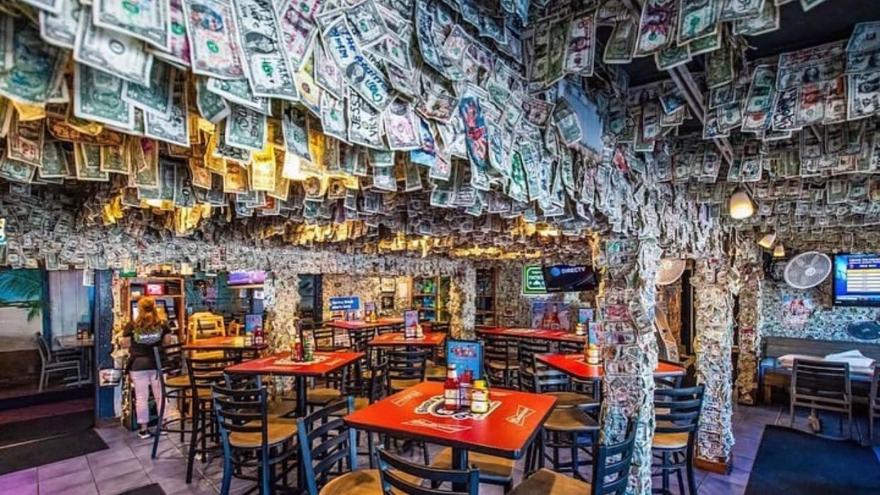 (CNN) -- It's a long-held tradition for patrons to staple money to anything they can at Siesta Key Oyster Bar: walls, ceilings and awnings. Now it'll go to a good cause.

At the beginning of September, staff and the owners at the Siesta Key Oyster Bar in Florida were watching reports about Hurricane Dorian ravaging the Bahamas and they wanted to find a way to help.

Their answer was blowing in the wind around them: for years, patrons -- armed with an industrial-strength stapler stored at the host stand -- have been plastering bills anywhere there was room and on top of other bills when there was no room.

It's based on a tale the staff tells customers, says Kristin Hale, general manager at the bar. Fishermen would staple a dollar to the wall of a beloved bar so that if they didn't catch anything that day, they still had enough money for a drink.

The staff decided that the money that was stapled everywhere in the bar would go to hurricane relief efforts in the Bahamas.

Employees equipped with pliers, screwdrivers and patience worked for the entire month of September to pull and pry years of industrial-strength staples out. They finished Tuesday with well over 14,000 bills.

Hale says they put the money into piles of $100, rubberbanded them and brought them to the bank.

She warned the bank before she showed up with a plastic bin full of money. It would have to get sorted at their vault facility.

In all, Hale says the bank told them they had collected $13,961. Some of the bills were too damaged to count as legal tender.

But most of the bills seen in photos by CNN appear to still be legal tender, according to the US Bureau of Engraving and Printing.

The bureau says that a bill is only considered mutilated if more than half of the original note is missing and it requires a special examination to determine its value.

Hale says she and the bar's owners, Jill and Geno Pedigo and Beth and Keith Owen-Cipielewski, will be donating the money to the Bahamas Red Cross in Nassau.

"You pay it forward," says Hale. "It gives it a whole new level of respect for what you do when you have the ability to do that."

For more information on how to help Hurricane Dorian victims, click here.