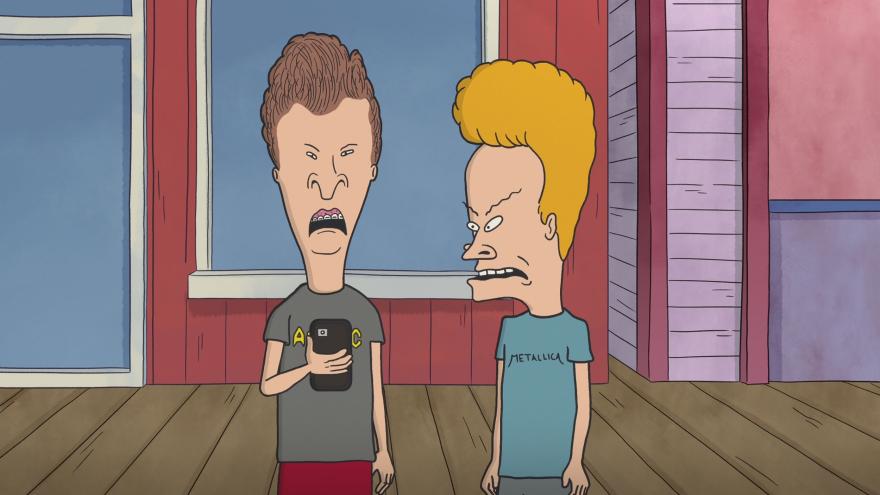 (CNN) -- The planet's dumbest animated duo make a semi-triumphant return in "Beavis and Butt-Head Do the Universe," which -- unlike when they "did" America 26 years ago -- premieres via Paramount+. Basically one long, idiotic misunderstanding, it's just the thing to fill the black hole of mindless and inappropriate comedy.

Series creator/voice guy Mike Judge teams with co-writer Lew Morton and directors John Rice and Albert Calleros on this latest adventure, which employs the tried-and-true plot device of having the central duo get sentenced to "space camp," where they're drafted for a mission that inadvertently vaults them through a Black Hole from 1998 into 2022.

A new century brings fresh terminology into their addled teenage lives ("White privilege" included), not that any deeper themes resonate with them. Indeed, the pair's entire motivation is that they think the one female astronaut (Andrea Savage) wants to "do it" with them, yielding an unending Abbott and Costello routine of words with double meanings that produce those trademark "Heh heh" chuckles.

As always, if Butt-Head is a moron, Beavis somehow resides a rung or two below him on the evolutionary ladder, at one point prompting the former to derisively observe, "You really brought your 'A' game today." Their main appeal is that they remain so cheerfully and unabashedly stupid that it's hard to resist, even when they're exposed to the Watcher-like beings who represent the best versions of them from alternate universes.

Much like the movie unleashed a quarter-century ago, stretching the pals' TV-forged interludes out over a near-90-minute frame represents a challenge, and the repetitive nature of the gags can't help but yield diminishing returns. Still, "Beavis and Butt-Head Do the Universe" is generally inventive enough to justify the return engagement, with knowing winks to the fact that Judge's creation is very much an artifact of its time, leaning into the idea that it's an anachronism when propelled into the 2020s.

That's not to say "Beavis and Butt-Head" brought its "A" game exactly, and indeed, it's frankly hard to imagine what its "A" game would even look like. "Intellectual property" is a misnomer, but the movie kicks off a mini-resurgence for the title after a hiatus of more than a decade, with a new series to join the existing episodes on the streaming service later this year.

Still, as "B" games go, "Do the Universe" captures what made the show tick. Sure, it's another throwback intended to wring value out of nostalgia, but one executed with a level of relentless silliness that, like its "stars," won't ever be accused of over-thinking things.

"Beavis and Butt-Head Do the Universe" premieres June 23 on Paramount+.