Before her sentencing, Felicity Huffman says she feels 'utter shame' for her role in the college cheating scandal 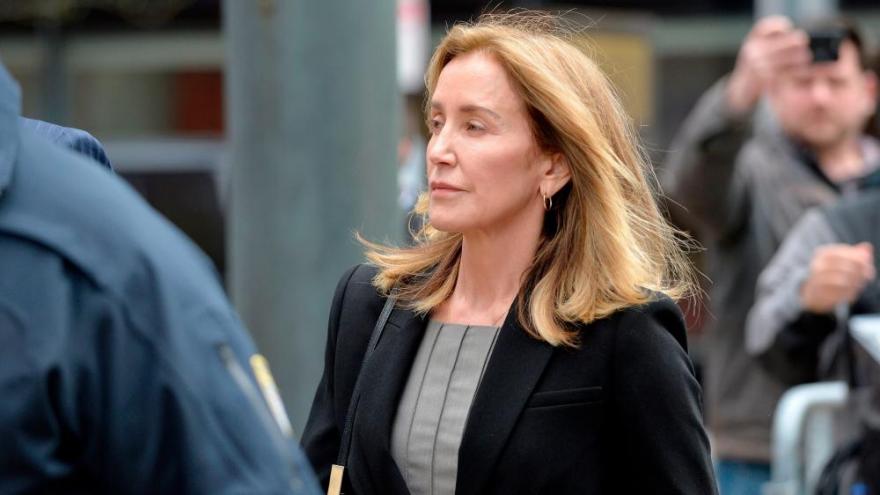 Felicity Huffman said she was just trying to be a good parent. Now, days before her sentencing for a federal crime, the actress said she regrets paying $15,000 to rig her daughter's SAT scores.

(CNN) -- Felicity Huffman said she was just trying to be a good parent. Now, days before her sentencing for a federal crime, the actress said she regrets paying $15,000 to rig her daughter's SAT scores.

The "Desperate Housewives" star is one of dozens of defendants charged as a result of an investigation, dubbed "Operation Varsity Blues," into a massive college admissions cheating scandal.

Huffman is scheduled to be sentenced by a judge on Friday. Prosecutors have suggested one month in prison and a $20,000 fine. Her lawyers are asking for a sentence of one year of probation, 250 hours of community service and a $20,000 fine.

The actress pleaded guilty in May to conspiring to pay $15,000 to a fake charity that facilitated cheating when her daughter took the SATs for college.

In an attorney filing last week, Huffman submitted a letter to the judge intended to "shed light on how I finally got to the day when I said 'Yes' to this scheme," the letter said.

"I don't write this letter to you in any way to justify my wrongdoing, my guilt or to avoid conscious acceptance of the consequences," she wrote.

"In my desperation to be a good mother I talked myself into believing that all I was doing was giving my daughter a fair shot," the letter said.

"I see the irony in that statement now because what I have done is the opposite of fair. I have broken the law, deceived the educational community, betrayed my daughter, and failed my family."

In the three-page letter, Huffman details early struggles with her daughter's medical issues and learning disabilities.

"The factual story is that I didn't go shopping for a college counselor to find out how to rig a SAT score. I didn't even know such a scheme existed," she wrote.

Huffman said her intention was to hire a counselor to maximize her daughter's success in applying for colleges.

She goes on to detail how many mothers at her daughter's public school for performing arts warned her not to leave the college process in the hands of overworked, understaffed administrators and that a private college counselor was a "vital" necessity.

"Mr. [William "Rick"] Singer was recommended as one of the best experts in LA, and I was told I would be lucky if I could get him to sign on to help me," Huffman wrote.

She said she worked with Singer -- the mastermind behind the college admissions scheme -- legitimately for a year. Huffman said she also consulted with Singer for her second daughter, who also experienced learning disabilities.

"I was relieved that he seemed so good at his job, was so confident and knowledgeable," Huffman wrote.

Singer pleaded guilty to four charges in March related to cheating on standardized tests and bribing college coaches and administrators.

"Mr. Singer told me that her tests scores were too low, and if her math SAT scores didn't rise dramatically, none of the colleges she was interested in would even consider her auditions," Huffman said in her letter.

"I honestly didn't and don't care about my daughter going to a prestigious college. I just wanted to give her a shot at being considered for a program where her acting talent would be the deciding factor."

She later adds, "I didn't want my daughter to be prevented from getting a shot at auditioning and doing what she loves because she can't do math."

After almost a year of working with Singer and his tutors "he told me it wasn't enough" and that her daughter's math scores still weren't measuring up.

Huffman said Singer told her "'we will make sure she gets the scores she needs" by having a proctor bump up her scores after she takes the test.

Her daughter would never know, and would be able to "'concentrate on what really matters: her grades and her auditions,'" Singer said, according to Huffman.

The actress said she struggled with the decision for six weeks.

"As warped as this sounds now, I honestly began to feel that maybe I would be a bad mother if I didn't do what Mr. Singer was suggesting."

To her "utter shame," Huffman wrote, she agreed to "cheating" on her first daughter's SAT scores and considered doing the same thing for her second daughter -- but "the decision haunted me terribly; I knew it was not right," she wrote.

Huffman said she "finally came to my senses" and stopped the process for her second daughter.

She described the moment her first daughter asked her -- with tears streaming down her face -- "Why didn't you believe in me? Why didn't you think I could do it on my own?"

"I had no adequate answer for her," Huffman wrote. She said she apologized to her daughter.

"I was frightened and I was stupid," she said.

"Please, let me be very clear; I know there is no justification for what I have done."

Huffman said she will "respectfully accept whatever punishment the court deems appropriate."

This story has been updated with the prosecution's most recent request for prison time for Felicity Huffman.