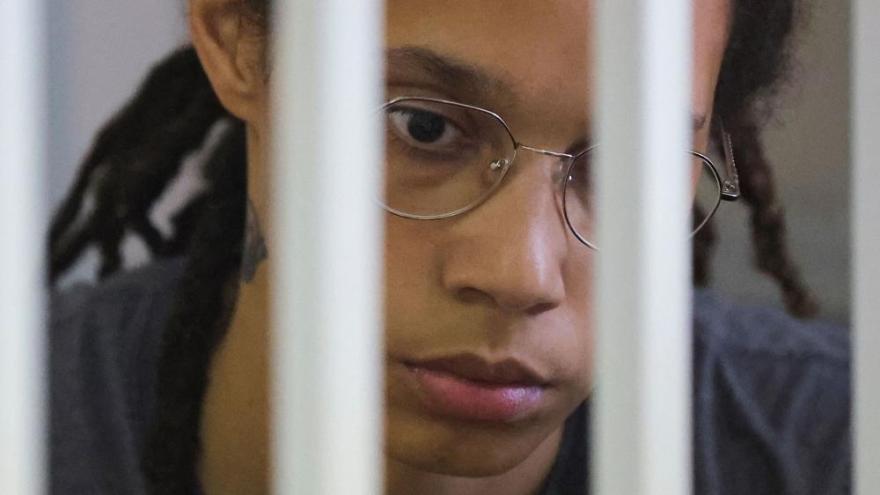 The Biden administration has had communications with Russia in the past days to try and secure the release of Brittney Griner and Paul Whelan. Griner is pictured here in court in Moscow, on August 4.

(CNN) -- The Biden administration has had communications with Russia to try and secure the release of Brittney Griner and Paul Whelan "as recently as within past days" said a senior administration official, speaking to CNN on Griner's 32nd birthday, which she will be spending in a Russian jail.

The United States first put an offer for a prisoner swap on the table with Russia back in June -- the details of which CNN exclusively reported -- and "conversations have not been static since then" the official said.

Despite the "pretty persistent" pace of discussions between the US and Russia to secure the Americans' release, the official said that the Biden administration has yet to receive a serious counteroffer from the Russian side.

"We have worked hard to try to demonstrate the sorts of things that could well be the basis for resolving this and each time we have articulated that it's been met not with a serious counteroffer," the official said.

They said the Russians have countered with "something not in our control, not in our ability to deliver," but did not go into further specifics.

"They're not non-responsive. I would say that they continue to respond with something that they know not to be feasible or available," the official said of the Russian response.

The official said the US has used multiple channels for discussions with the Russians and conversations have taken place both in-person, by phone, and "through other forms." The US has dangled multiple ideas for "things that could be in play" to urge a serious response from the Russians.

As negotiations continue, Griner and Whelan both remain behind bars, with the WNBA player detained since February and the ex-Marine detained since December 2018.

Griner was sentenced to nine years in prison in August, and the US Embassy has not had consular access to her since then, State Department spokesperson Ned Price said last week. However, US consular officers spoke by phone "briefly" with Griner and Whelan, principal deputy spokesperson Vedant Patel said Tuesday.

Griner released a statement on her birthday Tuesday thanking "everyone for fighting so hard to get (her) home."

"All the support and love are definitely helping me," she said in the statement, which was shared by Maria Blagovolina, a partner at Rybalkin, Gortsunyan, Dyakin and Partners law firm.

Griner's lawyers attempted to 'cheer her up.'

Blagovolina and her colleague Alexander Boykov told CNN they spent a few hours with Griner as part of an effort to "cheer her up as much" as they could, relaying birthday messages from "all over the world."

Boykov said Griner is not doing any "better" or "worse" than her fellow inmates, adding that her "likeable character" has helped with personnel in the prison. Blagovolina said the athlete is attempting to "do some exercises" every day despite the "limited" facilities available to her.

Her lawyers told CNN as Griner's October 25 appeal hearing draws closer, the athlete is feeling anxious and is "very much concerned with the outcome of the appeal."

"Brittney can't help thinking that if this [prisoner] swap doesn't happen, she will have to spend the whole period of the sentence in Russia. So that's why she is very much concerned with the outcome of the appeal," Boykov said.

When asked how much information the Russian legal team has about the negotiations between Russia and the US to secure her release, Blagovolina said: "We are in Russia ... I would say we have very limited information about what is going on about the status of negotiations. What I can say is that as her lawyers we are doing as much as we can. So, we hope that the government does the same."

She added that Griner is "informed" about what's going on and "really" appreciated the fact that President Joe Biden met with her wife Cherelle in September.

"So, she knows what's being done for her," Blagovolina added.

The US senior administration official said that "every day is too long" for Griner to remain wrongfully detained.

Next week Griner will appeal her 9-year prison sentence. It is unclear if the passage of that court date will bolster ongoing efforts to get her home.

"To the extent that that different phases of that decidedly imperfect system pass and open the possibility on the other side of real negotiations, we would welcome that. But the most candid answer is, we don't know," the official said.

Biden said last week that he would consider meeting with Russian President Vladimir Putin at the G-20 in November if he wanted to discuss Griner. When asked if there has been discussion between the US and Russia about that possible meeting on Griner the official said they would let Biden's remarks "speak for themselves."