US will send Stryker combat vehicles to Ukraine for first time as part of $2.5 billion security package 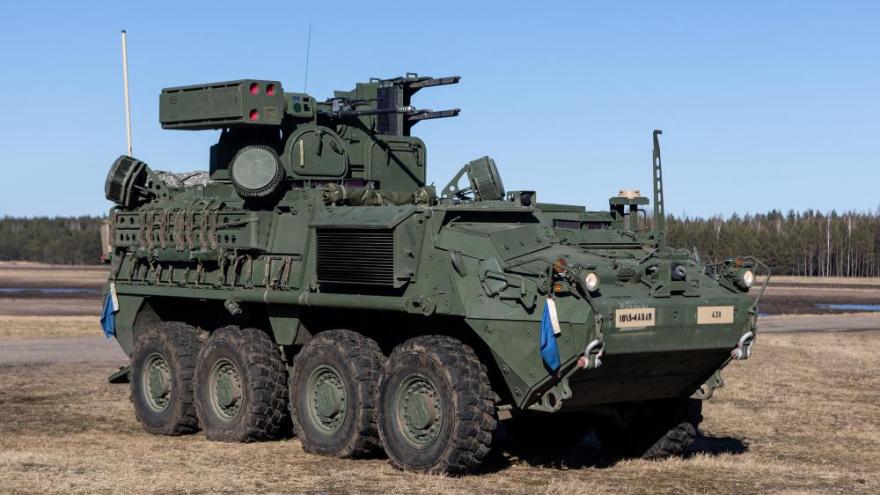 (CNN) -- The Pentagon announced a $2.5 billion Ukraine security package on Thursday, including for the first time Stryker armored vehicles and more Bradley fighting vehicles that could be used against any potential Russian offensive in Ukraine this spring.

The package, publicized a day before an international coalition meets in Germany to discuss more aid to Ukraine, is the second largest ever announced by the United States. The US has now committed $26.7 billion to Ukraine in security aid since the beginning of the war nearly a year ago.

"The United States also continues to rally the world to support Ukraine. We have seen incredible solidarity from our allies and partners, including at today's Ukraine Defense Contact Group, and we applaud the more than 50 countries who have come together to make significant contributions to support Ukraine," US Secretary of State Antony Blinken said in a statement.

"Russia alone could end this war today. Until it does so, we will stand United with Ukraine for as long as it takes," he added.

The latest package includes 90 Stryker armored personnel carriers and 59 more Bradley infantry fighting vehicles. The previous package included 50 Bradleys -- bringing the total given to more than 100. Thursday's announcement marks a significant escalation in the armored vehicles the US has committed to Ukraine in its fight against Russia.

The new aid also includes ammunition for the HIMARS rocket system that Ukraine has used to great effect against Russian weapons depots and command posts, as well as additional munitions and systems for aerial defense. The Pentagon has identified air defense as an ongoing priority to help bolster Ukraine's response to the Kremlin's most recent air attacks against critical infrastructure.

Russia's infrastructure attacks have at times left millions of civilians without electricity, heat, water and other critical services in the freezing winter months. In announcing the latest aid package, the Biden administration said such attacks "again demonstrate the devastating impact of Russia's brutal war in Ukraine."

Missing from the package are M1 Abrams tanks, a point of tension between the US and Germany. German officials have indicated they won't send their Leopard tanks to Ukraine, or allow any other country with the German-made tanks in their inventory to do so, unless the US also agrees to send its M1 Abrams tanks to Kyiv -- something the Pentagon has said for months it has no intention of doing given the logistical costs of maintaining them.

"One of the things that Secretary Austin has been very focused on is that we should not be providing the Ukrainians systems they can't repair, they can't sustain, and that they over the long term can't afford because it's not helpful," Undersecretary of Defense for Policy Colin Kahl told reporters on Wednesday. "And this isn't about a news cycle or what's symbolically valuable, it's what will actually help Ukraine on the battlefield."

The tank standoff comes amid a much larger debate between the US and its European allies over whether to send increasingly sophisticated weaponry to Ukraine, including longer-range missiles that would allow Ukraine to hit targets as far as 200 miles away.