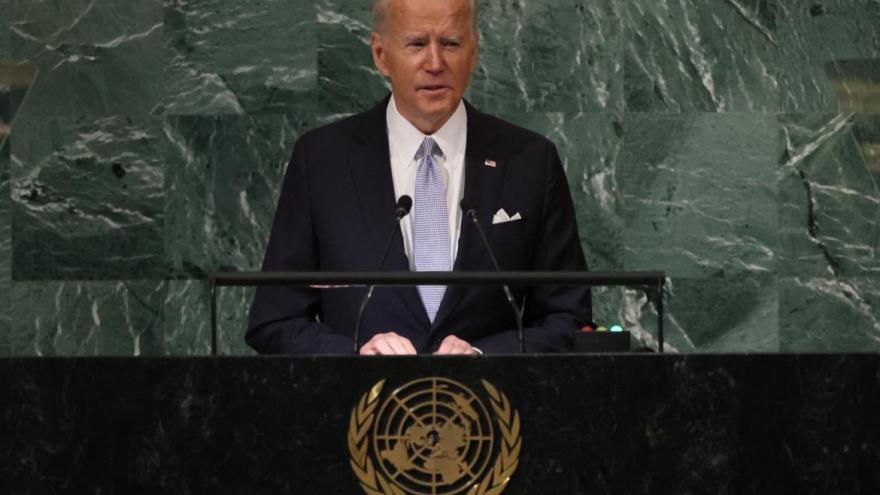 President Joe Biden addresses the United Nations General Assembly at the UN Headquarters in New York City on September 21. Biden announced on Wednesday that the US will provide $2.9 billion in additional funding to combat global food insecurity.

(CNN) -- The US will provide another $2.9 billion in additional funding to combat global food insecurity, President Joe Biden announced at the United Nations General Assembly on Wednesday.

World hunger is expected to rise this year, in part because Russia's invasion of Ukraine has further disrupted supply chains and increased food prices globally.

"It's Russia's war that is worsening food insecurity, and only Russia can end it," Biden said, stressing that the sanctions multiple countries have levied on Russia allow it to continue exporting food and fertilizer.

Nearly 120 million more people are estimated to be food insecure this year in 77 low- and middle-income countries in sub-Saharan Africa, North Africa, Asia, Latin America and the Caribbean, according to a recent report by the US Department of Agriculture.

This includes nearly 42 million more people who are food insecure resulting from Russia's invasion of Ukraine and fertilizer and energy price increases. Russia and Ukraine together account for one quarter of global wheat exports and are among the world's largest corn producers and exporters.

A total of 1.3 billion people are expected to be food insecure in the countries examined this year, an increase of nearly 10% over 2021, according to the report, which is published annually.

Billions in US aid this year

The aid Biden announced Wednesday adds to the $6.9 billion in assistance the US is directing for global food security this year, the administration said.

Even before Russia's invasion of Ukraine, food, energy and fertilizer costs were on the rise. Also, the Covid-19 pandemic sharply increased food insecurity in the countries examined as the economies contracted in 2020.

Some $2 billion in additional funds will be directed to global humanitarian assistance through the US Agency for International Development, known as USAID. It will provide food and nutrition aid, safe drinking water, health care and other relief.

The remaining money will be used to help small farmers and school children, as well as fund other food security efforts.

The outlook for food insecurity is expected to improve by 2032 as economic growth improves, according to the USDA report. Some 577 million people are projected to be food insecure in the countries examined at that time, a drop of nearly 57%.

The White House is also focused on food insecurity within the US. It will host a conference on hunger, nutrition and health next Wednesday, more than 50 years after the first and only such meeting was held.

Food insecurity among US families with children fell in 2021, reversing a spike during the first year of the pandemic, according to a separate USDA report released earlier this month. But elderly Americans living alone experienced an increase in food insecurity.