Biden concedes not enough has been done to expand Covid-19 testing capacity: 'We have more work to do' 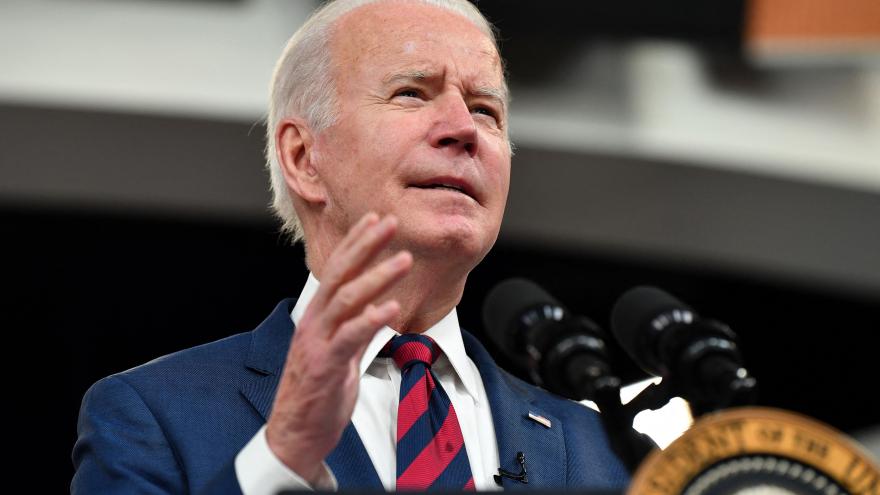 (CNN) -- President Joe Biden, speaking to the nation's governors, conceded Monday the steps he took earlier this year to scale up testing capacity for Covid-19 weren't enough to meet demand as a wave driven by the highly transmissible Omicron variant crashes across the country.

"It's not enough. It's clearly not enough. If we'd have known, we'd have gone harder, quicker if we could have," he said while joining a weekly virtual meeting between state leaders and members of his Covid-19 response team.

He said long testing lines over the Christmas weekend "shows that we have more work to do."

Biden's recognition of the testing shortfalls came a week after he laid out an enhanced strategy for combating the new surge focused heavily on accelerating testing and vaccinations.

The new steps, which included ordering 500 million at-home rapid tests that Americans can obtain for free, came too late to avoid disruptions to winter holiday plans. Thousands of flights were canceled as airline staff tested positive. Many Americans downsized their plans amid the viral spread. Biden's new tests, and the website where Americans can order them, won't be in place until next month, the White House has said.

Biden noted in his remarks that private insurers will soon be obliged to reimburse Americans for tests. But he said those steps weren't sufficient as the Omicron surge drives caseloads to record levels in areas of the Northeast.

It was Biden's first time joining the weekly call convened between his Covid team and governors. Briefly greeting the leaders before beginning a closed-door question-and-answer session, Biden said it was their work that would ultimately contain the pandemic.

"There is no federal solution -- this gets solved at state level," Biden said at the beginning of his remarks from the White House, where around 25 governors from across the country beamed in virtually for a weekly conference call. "That ultimately gets down to where the rubber meets the road, and that's where the patient is in need of help -- or preventing the need for help."

He added, "My message to the governors is simple: if you need something, say something. We're going to have your back in any way we can."

Speaking ahead of Biden, Arkansas Gov. Asa Hutchinson, a Republican, thanked the President but voiced a note of caution about the plan to procure half-a-billion at-home tests, saying it had the potential to scramble "the supply chain for the solutions we might offer as governor."

American governors have calibrated their approach to Omicron as an exhausted public reckons with a pandemic that is nearing its two-year mark. Many have resisted putting in place new restrictions, following Biden's pledge to keep the country open even amid record case numbers.

Still, some states have reimposed mask mandates and are preparing for a spike in hospitalizations by cutting elective surgeries at certain facilities.

The White House said during his call on Monday, Biden would "discuss his Administration's response to the Omicron variant and ... hear from the Governors on the needs in their States."

"It's important from him to hear directly from nation's governors right now," a White House official said, and "he's doing just that."

The President was not expected to make any major announcements during the call, the official said. Biden was scheduled to depart later in the afternoon for a brief holiday stay at his vacation home in Rehoboth Beach, Delaware, after spending the Christmas weekend with family at the White House.

Part of the plan Biden unveiled last week included sending materials and resources to areas where hospitals are experiencing strain. The White House said 1,000 military health personnel would be readied to provide assistance at over-burdened hospitals and that FEMA would activate teams to help states expand hospital capacity.

The plan also called for pre-positioning critical supplies -- including gloves, masks, gowns and ventilators -- for shipment when states need them. And the federal government has begun standing up free testing sites, including in New York City.

Yet many health experts questioned why the steps came so late when warnings about the Omicron's ability to spread quickly were raised last month. Long lines at testing sites persisted over the weekend, and the surge in cases shows no signs of slowing.

Weekly calls between the White House and the nation's governors began near the start of the pandemic. During the previous administration, the sessions were led by Vice President Mike Pence, who President Donald Trump assigned to lead his Covid task force. Trump himself joined the governors calls on a number of occasions.

The change in administration brought about a new approach to the calls, which are typically led by Jeff Zients, Biden's Covid response coordinator. Public health officials, including Dr. Anthony Fauci, also join. Biden himself hasn't joined one of the weekly calls since taking office, but he has addressed groups of governors on other occasions.

Many Republican governors have sharply criticized Biden's efforts to impose vaccine mandates at large employers and among health care workers, and have challenged the measures in court. The Supreme Court is due to hear oral arguments in cases challenging the vaccine requirements next week.

Over the summer, Biden sharply criticized Republican governors who resisted vaccine mandates and other measures to expand vaccinations, saying they were undermining his efforts to end the pandemic.

"I say to these governors, please help," Biden said in August. "If you aren't going to help, at least get out of the way of the people who are trying to do the right thing. Use your power to save lives."