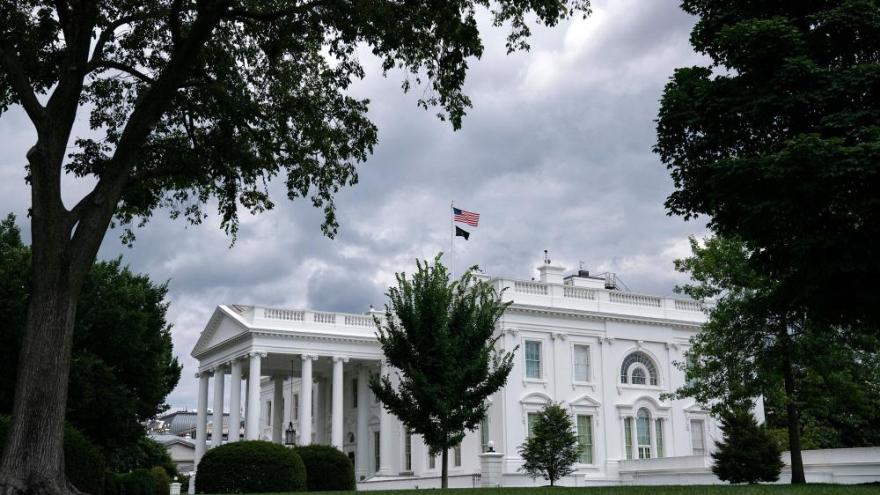 President Joe Biden has elevated three veteran White House officials to the most senior level of his West Wing staff. The White House is seen here in July of 2021.

(CNN) -- President Joe Biden has elevated three veteran White House officials to the most senior level of his West Wing staff, highlighting their roles as key players on his team as the administration enters a critical stretch.

"Each are Day One members of our team, and I am proud to announce their promotions to assistants to the President and have them as senior most members of this White House and trusted advisors," Biden said in a statement. "The work they do across this Administration is seen and felt by Americans all across this country."

Ron Klain, the White House chief of staff, announced the promotions during the daily senior staff meeting. The announcement was met with a round of applause, according to a source, reflecting a trio of "well-liked, hard-working colleagues."

"Their promotions are a reflection of their hard work and unmatched expertise in each of their fields and I am proud to continue serving alongside them," Klain said.

While Biden is surrounded by a close group of longtime senior advisers, Klein, Reddy and Ruiz represent senior members of the team who have played central roles throughout Biden's time in office.

Klein has become particularly pivotal in the wake of the Supreme Court's decision to strike down Roe v. Wade, serving as a point person for the administration's response and helping to lead policy planning and outreach to allies as the administration has grappled with the policy and political fallout of the decision.

Klein has led the Gender Policy Council, first established by Biden, since its inception in March 2021 and also served in the Obama and Clinton administrations in senior policy roles.

Ruiz, a longtime veteran Democratic political hand, is a central official in the White House political operation. She served as a campaign advisor to virtually every major Democratic candidate over the course of the last several campaign cycles, including Vice President Kamala Harris, President Barack Obama and Hillary Clinton. Ruiz led the Clinton campaign's efforts in Colorado and Nevada before moving over to become a senior advisor to the Democratic National Committee.

As Biden has started to accelerate his political activity in the final stretch before the midterm elections, Ruiz has a central role in the strategy and party outreach.