Biden honors 9/11 victims at Pentagon ceremony: 'This is a day not only to remember, but a day of renewal and resolve' 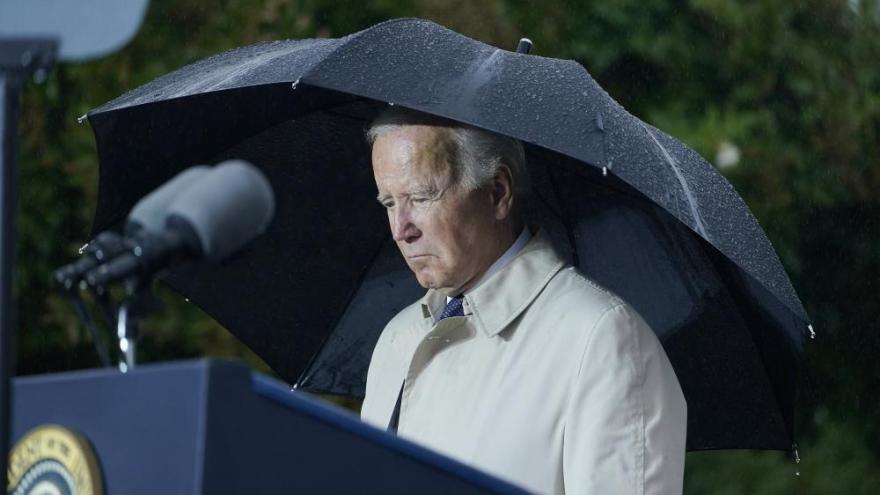 President Joe Biden stands during a moment of silence during a ceremony at the Pentagon on September 11, to honor and remember the victims of the 9/11 terror attacks.

(CNN) -- President Joe Biden commemorated the 21st anniversary of the 9/11 terror attacks at a remembrance event Sunday at the Pentagon, delivering heartfelt remarks that honored those killed there.

"I know for all those of you who lost someone, 21 years is both a lifetime and no time at all," Biden said at the National 9/11 Pentagon Memorial in Arlington, Virginia. "It's good to remember. These memories help us heal, but they can also open up the hurt and take us back to that moment when the grief was so raw."

The President talked about a message sent to the American people on September 11, 2001, from Queen Elizabeth II of the United Kingdom, who died Thursday, recalling that she "pointedly reminded us, quote, 'Grief is the price we pay for love.'"

As he has in several recent speeches, Biden talked on Sunday about securing American democracy. But he softened his rhetoric and avoided some of the more politically charged statements he's made in the lead up to the midterms.

"It's not enough to stand up for democracy once a year or every now and then. It's something we have to do every single day," the President said. "So this is a day not only to remember, but a day of renewal and resolve for each and every American and our devotion to this country."

Nearly 3,000 people died in the 9/11 attacks, which were orchestrated by al Qaeda leader Osama bin Laden. Hijacked airliners crashed into the World Trade Center in New York City, the Pentagon in Arlington, Virginia, and a field near Shanksville, Pennsylvania.

Biden in his speech also highlighted the killing of al Qaeda leader Ayman al-Zawahiri in a drone strike earlier this year, saying the US "will not rest, we'll never forget, we will never give up."

"And now Zawahiri can never again threaten the American people," the President said.

Before the speech, Biden participated in a wreath-laying ceremony at the Pentagon, pausing briefly in front of a ceremonial wreath to touch it and then putting his hand over his heart. He was joined at the event by Chairman of the Joint Chiefs of Staff Mark Milley and Defense Secretary Lloyd Austin.

The White House announced earlier that attendants for the President's remarks at the National 9/11 Pentagon Memorial included "family members of the fallen, first responder, representatives from first responder groups, and Department of Defense leadership."

Biden also said Sunday morning in Delaware that he has "a plan" for the families of 9/11 victims.

Responding to questions from reporters before boarding Air Force One to travel to Washington, DC, Biden, when asked if he had a plan to deal with the families of 9/11 victims who want justice after the terror attacks, responded, "Yes, there is a plan for that," without elaborating.

Vice President Kamala Harris, meanwhile, met with family members who lost loved ones in the 9/11 attacks after arriving at the National September 11 Memorial in New York City. Harris, who attended a commemorative service at Ground Zero, also met with first responders, according to a White House official.

'Seared into our collective memory'

First lady Jill Biden spoke Sunday at a 9/11 memorial ceremony in Shanksville, Pennsylvania, where she was joined by her sister, Bonny Jacobs, a flight attendant for United Airlines.

In her remarks at the Flight 93 National Memorial, the first lady recognized the fear she felt on 9/11, thinking of her sister before the two were able to get in touch and she knew she was safe.

"Certain images are seared into our collective memory," she said. "Yet even as we share our grief, that moment affected us all in unique ways. Looking back, we remember the details like a slide under a microscope."

"I knew that the weight of this tragedy would be heavier for her," Biden said of her sister. "When I got to her house, I realized that I was right. She hadn't just lost colleagues. She had lost friends."

Biden said Jacobs also felt proud of what her colleagues and the passengers of Flight 93 had done to prevent certain disaster that day.

"Pride that it was her fellow flight attendants and the passengers of United Flight 93 who fought back, who helped stop the plane from taking an untold number of lives in our nation's capital," the first lady said.

Biden also walked the Field of Remembrance at the memorial and laid a wreath in honor of the victims.

"You have stories of loss, of last phone calls and waiting for news that you didn't want to receive, of hands that you will never hold again, and voices that you only longed to hear," she said.

Former Secretary of State Hillary Clinton, herself a former first lady who was a New York senator at the time of the 9/11 attacks, said Sunday that the day was "indelibly part of my memories."

"I feel grateful that we were able to come together as a country at that really terrible time. We put aside differences. I wish we could find ways of doing that again," Clinton told CNN's Dana Bash on "State of the Union."

"We have also, I think have been reminded about how important it is to try to deal with extremism of any kind, especially when it uses violence to try to achieve political and ideological goals," she added. "I'm one who thinks that there are lessons still to be learned from what happened to us on 9/11 that we should be very aware of, during this time in our country and the world's history."