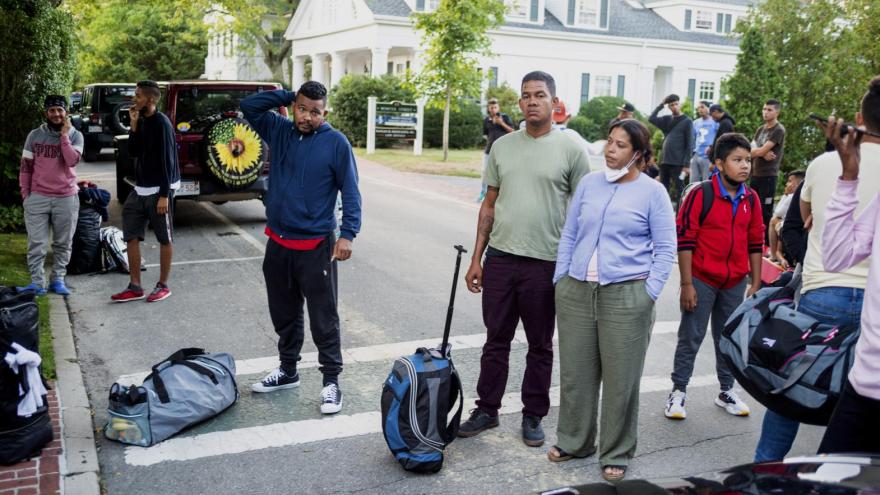 Biden administration officials are set to meet on September 16 to discuss a multitude of critical immigration issues. Immigrants are pictured here gathering with their belongings outside St. Andrews Episcopal Church, September 14, on Martha's Vineyard.

Biden accused the Republicans of "playing politics with human beings" and "using them as props" in response to those stunts. The two governors have been frequent antagonists for Biden on immigration and the southern border since he came into office in January 2021.

The meeting is expected to cover issues such as operational support along the border and support in destination cities, including funding for services and housing.

Lawyers from the departments of Justice and Homeland Security are separately weighing litigation options regarding the movement of migrants out of state by Republican governors. An administration official referred CNN to the Justice Department when asked whether litigation options would specifically be discussed in Friday's meeting.

Axios was first to report on the meeting.

Immigration has been a major issue for the Biden administration and Republicans have cited border security as a key issue ahead of the midterm elections. The US is on track to see a record high of more than 2 million encounters at the US-Mexico border by the end of the fiscal year, CNN has reported, as conditions deteriorate in Latin America. To draw attention to the issue and protest what they say are inadequate federal efforts on southern border security, several Republican officials have transported migrants to northern cities and states.

An estimated 50 migrants arrived on Martha's Vineyard on Wednesday, and officials said the group included several families with young children. In DC, dozens of migrants were left standing on the sidewalk and in the grass outside the gated US Naval Observatory in Washington on Thursday. Harris' residence is located on Naval Observatory grounds. The migrants are asylum-seekers who have been processed by federal immigration authorities and are awaiting court dates.

The Defense Department said Friday it would look into the use of a joint-use airfield at Joint Base San Antonio, Kelly Field, to fly migrants to Martha's Vineyard.

"We'll look into what exactly the situation was at Kelly," said Pentagon press secretary Air Force Brig. Gen. Patrick Ryder at a briefing with reporters.

Ryder said that "there could be a variety of factors" in the use of Kelly, which is used by both military and civilian aircraft.

"Just because aircraft are taking off from a location does not necessarily mean that there's (Defense Department) involvement," said Ryder.

The director at Martha Vineyard's airport previously confirmed the flight path of the two planes of migrants to CNN.

White House press secretary Karine Jean-Pierre on Friday accused DeSantis and Abbott of using tactics similar to those used by smugglers in Mexico and Guatemala.

"These vulnerable migrants were reportedly misled about where they were headed, told they would be headed to Boston, misled about what they would be provided when they arrived, promised shelter, refuge, benefits and more. These are the kinds of tactics we see from smugglers in places like Mexico and Guatemala. And for what -- a photo op?" Jean-Pierre said at a news briefing.

Jean-Pierre accused the Republican governors of using the migrants as "political pawns" and said they "treated them like chattel in a cruel, premeditated political stunt."

The migrants were transported to Harris' residence days after the vice president said on NBC's "Meet the Press" that she was confident the border was "secure."

"These are human beings, these are people. They needed to be treated with dignity and kindness and respect and they weren't," Emhoff said.

He continued, "And we have so-called leaders in this country who, rather than focusing on what's good for the public within their own states, they're using their people as pawns for a political stunt."

The migrants on Martha's Vineyard will be voluntarily transported Friday to receive shelter and humanitarian support at Joint Base Cape Cod, according to Massachusetts Republican Gov. Charlie Baker, who is also activating up to 125 National Guard to assist in the relief effort. Massachusetts Emergency Management Agency (MEMA) is coordinating with state and local officials to ensure access to food, shelter and other essential services for the families.

This story has been updated with additional developments on Friday.