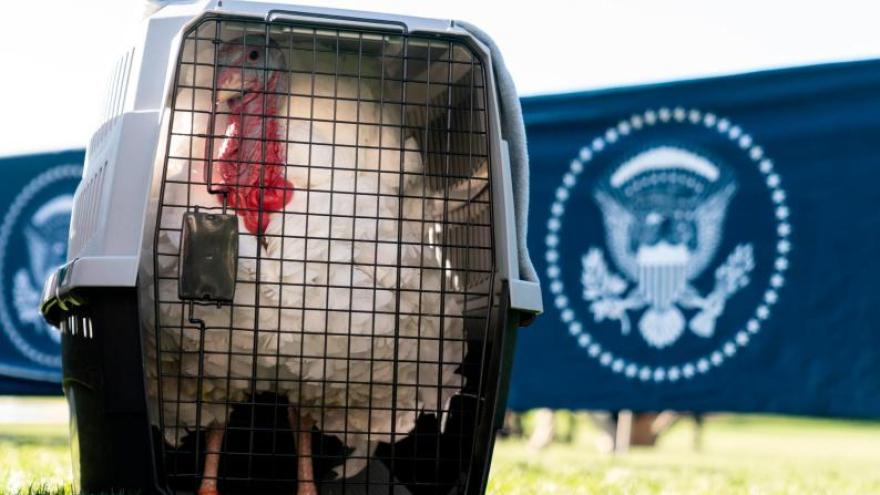 "Chocolate" waits in its crate on the South Lawn of the White House in Washington, Monday, Nov. 21, before President Joe Biden pardons the National Thanksgiving Turkey.

"The votes are in, they've been counted and verified, no ballot stuffing, no fowl play. The only red wave this season is going to be if German Shepherd Commander knocks over the cranberry sauce," Biden told an audience on the White House South Lawn.

Justice, and perhaps a side of cranberry sauce, was served as Biden roasted the 2022 National Thanksgiving Turkey and an alternate, Chocolate and Chip. The president quipped that the two birds were part of "another flock hoping to come to Washington in 2024."

Baste on tradition, Biden designated Chocolate as the official National Thanksgiving Turkey, but both Chocolate and Chip were pardoned. The birds weigh in at 46 and 47 pounds, respectively, and were raised by National Turkey Federation (NTF) chairman Ronnie Parker near Monroe, North Carolina.

As he began his remarks on the crisp November morning, Biden joked he would keep it short because "nobody likes it when the turkey gets cold."

The poultry of honor arrived in Washington, DC, over the weekend, where they gobbled up an opportunity to stay at the nearby Willard Hotel and ruffled some feathers as they trotted around a Sunday press conference.

Biden made much ado about stuffing before heading to Marine Corps Air Station Cherry Point in North Carolina, for a Friendsgiving dinner with service members and military families, part of first lady Dr. Jill Biden's Joining Forces initiative. The Biden family will spend the Thanksgiving holiday in Nantucket, Massachusetts, where family discussions about the president's political future and a 2024 run will begin in earnest.

Despite the cornucopia of jokes cracked Monday, the turkey pardon comes as Americans are facing rising costs at their Thanksgiving tables. The American Farm Bureau's annual survey found that the average price of Thanksgiving dinner is up 20% since last year due to high inflation, as well as supply chain disruptions and the war in Ukraine.

There was also the added challenge this year, the Department of Agriculture said in a memo, of a "highly pathogenic avian influenza (HPAI), which resulted in the loss of over 50 million birds, including over 8 million turkeys." The USDA, the memo said, worked with states and producers "to implement a comprehensive, collaborative, and all-hands-on-deck response to this outbreak and ensure there is an adequate supply of turkeys for the holiday season, successfully ensuring that everyone who wants a bird will be able to get one."

Rumors of turkey pardons go back in presidential history as far as the Lincoln administration. Folklore has it that Lincoln's young son asked his father to spare a pet turkey that was supposed to be part of their Thanksgiving dinner.

The NTF became the official turkey supplier to the first family in 1947 and the formal turkey presentation ceremony has been around since President Harry Truman. Truman was the first to accept a turkey from them -- however, he did not spare the bird.

The first documented turkey pardon was given by President John F. Kennedy in 1963, though it didn't catch on right away. Even though President Gerald Ford pardoned President Richard Nixon, neither one of them decided to officially pardon any turkeys.

Biden's most recent predecessors have peppered their pardons with turkey and other topical political puns.

Last year, Biden pardoned Peanut Butter and Jelly as he acknowledged a return to Thanksgiving traditions amid the Covid-19 pandemic.

"Eventually, Peanut Butter and Jelly were selected based on their temperament, appearance and, I suspect, vaccination status," the president joked. "Yes, instead of getting basted, these two turkeys are getting boosted."

Former President Donald Trump poked fun at the impeachment inquiry in 2019, telling a crowd that the turkeys "have already received subpoenas to appear in Adam Schiff's basement."

And former President Barack Obama employed his signature rhetoric: "I do -- I want to take a moment to recognize the great turkeys who weren't so lucky, who didn't get to ride the gravy train to freedom. Who met their fate with courage and sacrifice and proved that they weren't chicken."

Chocolate and Chip will retire to North Carolina State University in Raleigh, North Carolina, following their trip to the nation's capital.