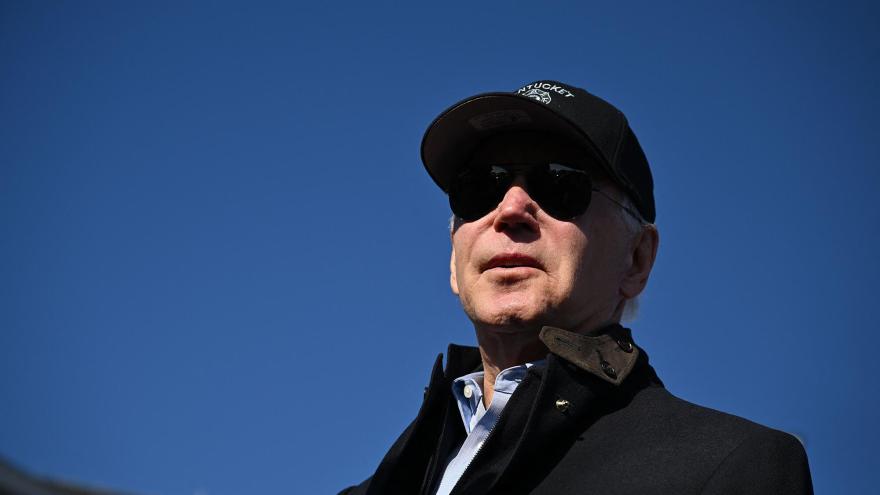 President Joe Biden speaks to the press after visiting a Nantucket, Massachusetts, fire station to thank first responders during the Thanksgiving Day holiday, on November 24.

(CNN) -- President Joe Biden said Thursday that he would work with Congress to "try to get rid of assault weapons" after a recent spate of shootings in the US.

"The idea (that) we still allow semiautomatic weapons to be purchased is sick, it's just sick. It has no social redeeming value, zero, none. Not a single, solitary rationale for it," Biden told reporters during a brief gaggle outside the Nantucket Fire Department in Massachusetts, where he greeted first responders.

A recent shooting at an LGBTQ club in Colorado Springs, Colorado, involved an assault-style weapon and a handgun, while officials said the shooter at a Walmart in Chesapeake, Virginia, earlier this was week was armed with a handgun and multiple magazines.

Congress returns next week with a jam-packed to-do list in the lame duck session, focused primarily on the must-pass government funding bill, as well as other priorities. But any action on gun legislation -- particularly the assault weapons ban Biden has repeatedly called for -- does not have the votes to pass. And the reality of a divided Congress in next year's session makes it highly unlikely that anything will pass over the next two years.

The president also said he has "not directly engaged" with stakeholders as railway and labor negotiators barrel toward a possible strike ahead of a critical December deadline.

"I can't (comment) because it's the middle of negotiations still. My team has been in touch with all the parties... and I have -- I have not directly engaged yet because they're still talking," Biden said.

Biden doesn't have the authority at this point in the process to unilaterally order the railroad workers to stay on the job, as he did for a potential freight railroad strike in July, and he would need to approve of any congressional action for it to take effect.

And as Ukraine grapples with damages to its critical infrastructure after Russian strikes, Biden said it was "no time to walk away from Ukraine" as he touted a recent additional $400 million drawdown announced earlier this week. The White House has also asked Congress for $37.7 billion in supplemental funding for Ukraine.

"We had a lot of talk in the last election about whether the other team is going to continue to support Ukraine. I still believe there's enough support that we can continue," he said.

He later added that oil price cap talks are "in play."

Biden arrived at the Nantucket Fire Department on Thursday morning and greeted a group of firefighters and others assembled outside, a visit that came moments after he called into the Macy's Thanksgiving Day Parade and said he was thankful for first responders this year. Biden shook hands and posed for photos and was bestowed with a black Nantucket Fire Department baseball cap, which he wore during his impromptu gaggle.