Biden says monkeypox not as concerning as Covid 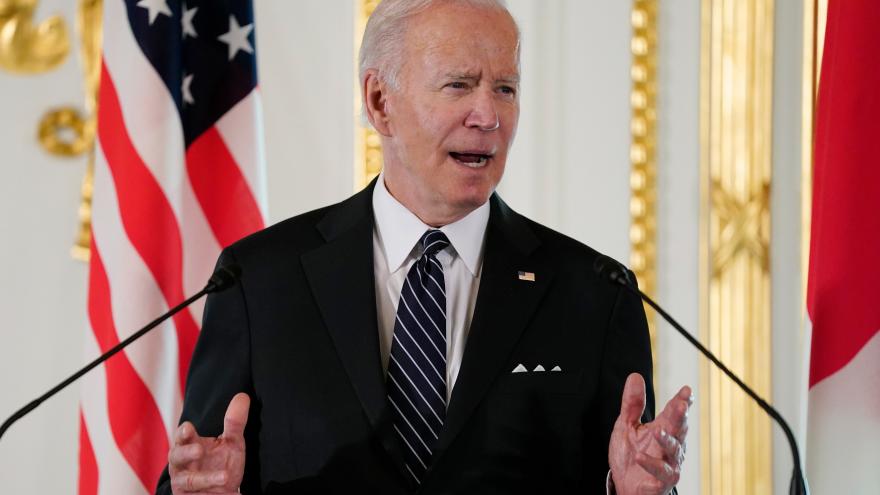 (CNN) -- US President Joe Biden said Monday he doesn't believe an outbreak of monkeypox is as risky as the Covid-19 pandemic, tempering comments he made a day earlier that people should be "concerned."

"We have had this monkeypox in large numbers in the past. We have vaccines to take care of it," Biden said during a visit to Tokyo.

"I just don't think it rises to the level of the kind of concern that existed with Covid-19."

Still, he said "people should be careful."

On Sunday, Biden had said everyone should be concerned about the spread of monkeypox.

"They haven't told me the level of exposure yet, but it is something that everybody should be concerned about," he told CNN.

"We're working on it hard to figure out what we do and what vaccine, if any, might be available for it. It is a concern in that if it were to spread it would be consequential. That's all they told me."

Monkeypox in the US

The US Centers for Disease Control and Prevention is currently tracking recent clusters of monkeypox infections and other possible cases in the United States.

On Friday, it said it was monitoring six people in the US for possible monkeypox infections after they sat near an infected traveler who had symptoms while on a flight from Nigeria to the United Kingdom in early May.

Separately, CDC officials are also investigating a case of monkeypox confirmed in a man in Massachusetts who had recently traveled to Canada. And in New York City, one patient has tested positive for orthopoxvirus, the family of viruses to which monkeypox belongs, NYC health officials have reported.

Initial symptoms of monkeypox are typically flu-like, such as fever, chills, exhaustion, headache and muscle weakness, followed by swelling in the lymph nodes, which help the body fight infection and disease.

Next comes a widespread rash on the face and body, including inside the mouth and on the palms of the hands and soles of the feet.

The painful, raised poxes are pearly and fluid-filled, often surrounded by red circles. The lesions finally scab over and resolve over a period of two to three weeks.

Close contact with an infected individual is required for the spread of the monkeypox virus, experts say.

Infection can develop after exposure to "broken skin, mucous membranes, respiratory droplets, infected body fluids or even contact with contaminated linen," said Neil Mabbott, personal chair in immunopathology at the veterinary school of the University of Edinburgh in Scotland.

CNN previously reported that CDC officials are evaluating whether a smallpox vaccine should be offered to health care workers treating monkeypox patients and other people who may be at "high risk" of exposure to the disease.

The variola virus that causes smallpox and the monkeypox virus are related. They are both members of the Orthopoxvirus genus, belonging to the scientific family of "pox" viruses. Some of the vaccines administered to prevent smallpox have also been shown to prevent monkeypox.