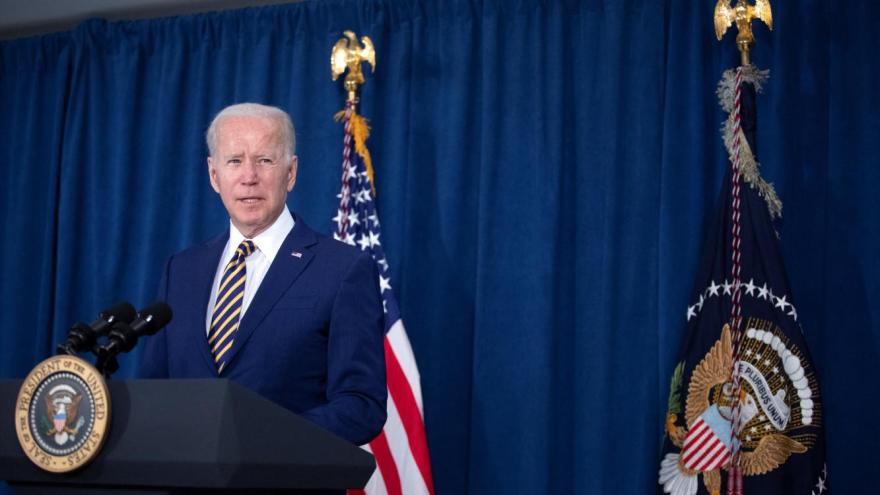 On June 8, US President Joe Biden said the results of the previous day's primary elections reflected a desire from the American public to take a harder stance on crime and gun violence.

(CNN) -- President Joe Biden on Wednesday said the results of the previous day's primary elections reflected a desire from the American public to take a harder stance on crime and gun violence and called on states and localities to spend funds allocated from the Covid-19 relief bill to bolster police departments.

"I think the voters sent a clear message last night: Both parties ought to step up and do something about crime, as well as gun violence," Biden told reporters before boarding Air Force One to fly to Los Angeles.

"It's time the states and the localities spend the money they have to deal with crime, as well as retrain police officers, as well as provide for more community policing. It's time to get on with doing that. And that's what I think the message last night from the American public was in all the primaries," Biden said.

The President also noted that he included $300 million in his budget request from Congress to hire and retrain police.

Voters in San Francisco and Los Angeles -- two of the nation's most liberal cities -- sent a clear message Tuesday that they want their elected officials to prioritize curbing crime and homelessness.

San Francisco voters recalled District Attorney Chesa Boudin, a progressive who had halted cash bail and attempted to reduce the number of people sent to prison. In Los Angeles, billionaire real estate developer Rick Caruso, who is a former Republican and ran on being tough on crime, garnered enough support to force the race into a November runoff. He will face Democratic Rep. Karen Bass, who had once been considered the front-runner, in the race to succeed term-limited Mayor Eric Garcetti.

The results signal a departure from the kind of progressive politics that dominated the 2020 election cycle, when many Democratic voters said they wanted criminal justice system overhauls and more police accountability.

Biden's comments also come as his administration and Democrats in Congress attempt to get gun legislation passed in the wake of the elementary school shooting in Uvalde, Texas, that killed 19 students and two teachers. The odds of any sweeping overhaul remain very steep, but lawmakers have expressed optimism that a deal for a narrow and targeted bill could be reached as soon as the end of this week.

Biden has called on Congress to implement measures including a ban on assault weapons, tougher background check laws and a higher minimum age of purchase, among others.