Biden signs $40 billion aid package to Ukraine while in Seoul 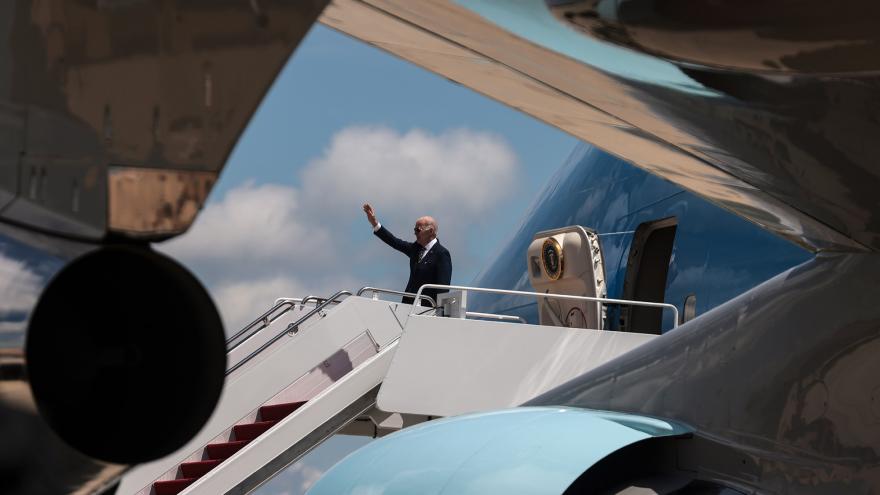 (CNN) -- President Joe Biden on Saturday signed the $40 billion aid package to Ukraine, a White House official said, after the bill was flown to Seoul.

The Senate passed it following Biden's departure from Washington.

The confirmation that Biden had signed the bill came as the President attended a state dinner with South Korean President Yoon Suk Yeol. Biden signed the aid package off camera earlier Saturday, along with a bill to improve access to baby formula for families in need.

The legislation provides money for military and humanitarian aid, including funding to assist Ukrainian military and national security forces, help replenish stores of US equipment sent to Ukraine, and provide public health and medical support for Ukrainian refugees.

A National Security Council spokesman told CNN the bill was being flown to South Korea with someone already traveling to the region for official duties.

National security adviser Jake Sullivan told reporters traveling with the President on Thursday, "The President does intend to sign the bill while he's on the road so that he can sign it expeditiously. The modalities of that are being worked right now so that he can get it and sign it. There won't be a gap for that very reason."

The bill also provides $6 billion in Ukraine Security Assistance Initiative funding, another way the Biden administration has been providing Ukraine with military assistance. The funding allows the administration to buy weapons from contractors and then provide those weapons to Ukraine, and as a result does not draw directly from US stocks.

According to a fact sheet from House Democrats, the money will assist Ukrainian military and national security forces and will go toward weapons, equipment, training, logistics and intelligence support, as well as other needs.

There will also be roughly $9 billion to help restock US equipment that has been sent to Ukraine, which comes as many lawmakers have raised concerns about replacing stocks of weapons the US is giving to Ukraine, especially stingers and javelin missiles.

The bill provides $3.9 billion for European Command operations, which includes "mission support, intelligence support, hardship pay for troops deployed to the region and equipment, including a Patriot battery," according to a House Democrat fact sheet. The Department of Defense has added additional US troops in Eastern European countries to bolster support for NATO allies near Ukraine since the Russian invasion began.

To address humanitarian needs, the bill will include $900 million to bolster refugee assistance, including housing, trauma support, and English language instruction for Ukrainians fleeing the country.

The measure provides an additional $54 million for public health and medical support for Ukrainian refugees.