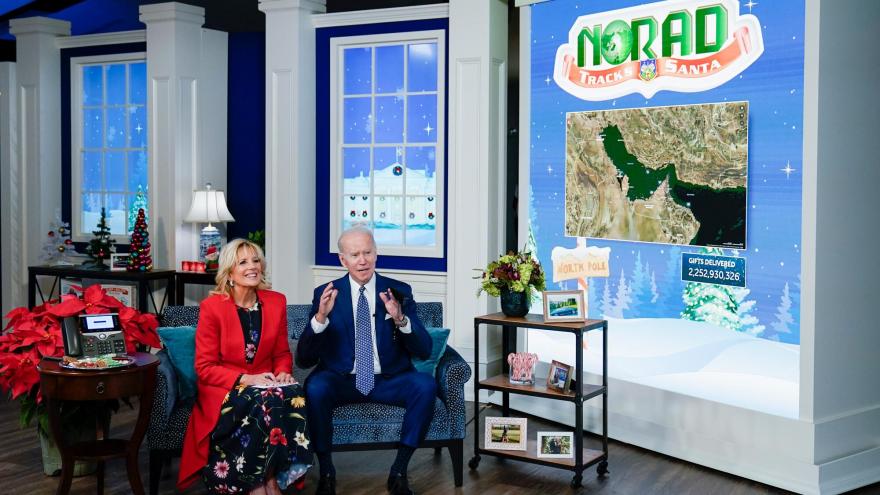 The annual defense bill authorizes $770 billion in funding for the Defense Department. It also outlines the policy agenda for the government's largest agency and the US military. In a signing statement, Biden lauded "vital benefits" from the bill but pointed to a series of provisions the administration takes issue with, citing "constitutional concerns or questions of construction."

Biden wrote Section 1033 "could make it difficult to comply with the final judgment of a court that has directed the release of a detainee on a writ of habeas corpus," and "constrain the flexibility of the executive branch with respect to its engagement in delicate negotiations with foreign countries."

"I urge the Congress to eliminate these restrictions as soon as possible," Biden writes.

This year, the bill includes several changes to the military justice system to overhaul how the US military handles sexual assault and harassment.

While some senators wanted the bill to go further in addressing sexual assault and harassment in the military, Pentagon spokesman John Kirby earlier this month hailed the provisions as "an historic initiative here, removing those crimes and related crimes, the prosecution of them outside of the chain of command."

The White House called it "a historical point ... with meaningful reform of the military justice system and handling of handling of sexual assault cases."

"The President believes that this legislation takes groundbreaking steps to improve the response and ... prevention of sexual assault in the military," White House deputy press secretary Karine Jean-Pierre told reporters traveling with the President to Kansas City, Missouri, earlier this month.

The final version of the bill also included a 2.7% pay increase for military service members and Defense Department civilian employees, established a "multi-year independent Afghanistan War Commission" to examine the war in Afghanistan after the US military withdrawal and provided $300 million in military aid to the Ukrainian Security Assistance Initiative, according to summaries of the bill's text from the House and Senate Armed Services Committees.

In response to provisions of the NDAA that will require the executive branch to produce reports to Congress, Biden wrote he had concerns about revealing intelligence sources.

"It has been the common practice of the executive branch to comply with statutory reporting requirements in a way that satisfies congressional needs, pursuant to the traditional accommodation practice and consistent with due regard for the protection from unauthorized disclosure of classified information relating to sensitive intelligence sources and methods or other exceptionally sensitive matters," Biden wrote.

The President also added a personal note to the statement, noting his opposition to the use of open-air burn pits. Biden has previously said he believes the exposure to burn pits in Iraq was the cause of the cancer that eventually killed his son Beau Biden in 2015, though he has noted he cannot prove it.

"Finally, I oppose the use of open-air burn pits, which is prohibited in contingency operations by Public Law 111-84, section 317 (10 U.S.C. 2701 note). I request that the Secretary of Defense seek Presidential approval prior to exercising the exemption authority to this prohibition added by section 316 of the Act," Biden wrote.

Several key provisions that were expected to be passed in this year's version of the NDAA did not make it into the final version of the bill, including an amendment to repeal the 2002 Authorization for Use of Military Force Against Iraq, sanctions against countries participating in the Nord Stream 2 pipeline and additional sanctions against Russia.