Biden signs bipartisan gun safety bill into law: 'God willing, it's going to save a lot of lives' 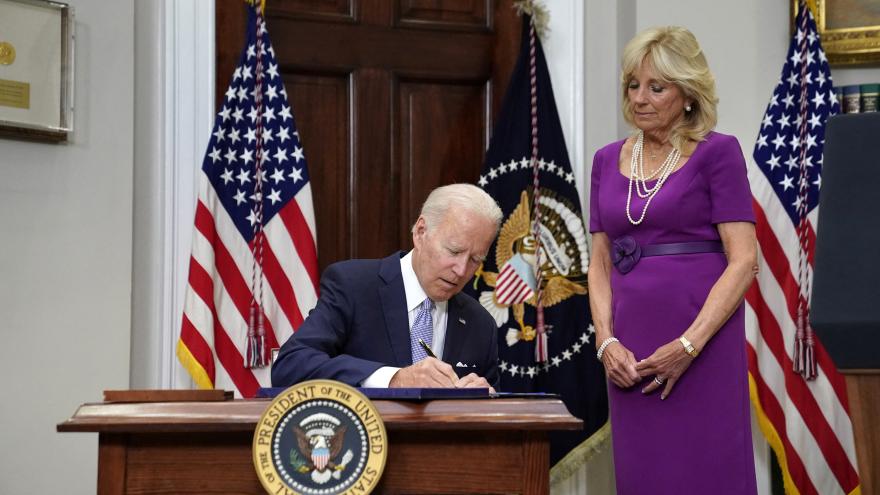 (CNN) -- President Joe Biden on Saturday signed into law the first major federal gun safety legislation passed in decades, marking a significant bipartisan breakthrough on one of the most contentious policy issues in Washington.

"God willing, it's going to save a lot of lives," Biden said at the White House as he finished signing the bill.

The legislation came together in the aftermath of recent mass shootings at a Uvalde, Texas, elementary school and a Buffalo, New York, supermarket that was in a predominantly Black neighborhood. A bipartisan group of negotiators set to work in the Senate and unveiled legislative text on Tuesday. The bill -- titled the Bipartisan Safer Communities Act -- was released by Republican Sens. John Cornyn of Texas and Thom Tillis of North Carolina and Democratic Sens. Chris Murphy of Connecticut and Kyrsten Sinema of Arizona.

In his remarks Saturday, the President announced he'd host members of Congress who supported the landmark gun safety legislation at a White House event on July 11, following his return from Europe, to celebrate the new law with the families of gun violence victims.

The package represents the most significant new federal legislation to address gun violence since the expired 10-year assault weapons ban of 1994 -- though it fails to ban any weapons and falls far short of what Biden and his party had advocated for, and polls show most Americans want to see.

"While this bill doesn't do everything I want, it does include actions I've long called for that are going to save lives," Biden said. "Today, we say more than 'enough.' We say more than enough. This time, when it seems impossible to get anything done in Washington, we are doing something consequential."

Biden added, "If we can reach compromise on guns, we ought to be able to reach a compromise on other critical issues, from veterans' health care to cutting edge American innovation and so much more. I know there's much more work to do, and I'm never going to give up, but this is a monumental day."

It includes $750 million to help states implement and run crisis intervention programs. The money can be used to implement and manage red flag programs -- which through court orders can temporarily prevent individuals in crisis from accessing firearms -- and for other crisis intervention programs like mental health courts, drug courts and veterans courts.

Now the law will bar from having a gun anyone who is convicted of a domestic violence crime against someone they have a "continuing serious relationship of a romantic or intimate nature." The law isn't retroactive. It will, however, allow those convicted of misdemeanor domestic violence crimes to restore their gun rights after five years if they haven't committed other crimes.

The bill encourages states to include juvenile records in the National Instant Criminal Background Check System with grants as well as implements a new protocol for checking those records.

The bill goes after individuals who sell guns as primary sources of income but have previously evaded registering as federally licensed firearms dealers. It also increases funding for mental health programs and school security.

Just before signing the bill, Biden praised the families of gun violence victims with whom he had met. He said their activism in the face of loss was a difference-maker.

"I especially want to thank the families that Jill and I have (met), many of whom we sat with for hours on end, across the country. There's so many we've gotten to know who've lost their soul to an epidemic of gun violence. They've lost their child, their husband, their wife," Biden said.

"Nothing is going to fill that void in their hearts. But they led the way so other families will not have the experience and the pain and trauma they've had to live through."

This story has been updated with additional developments on Saturday.