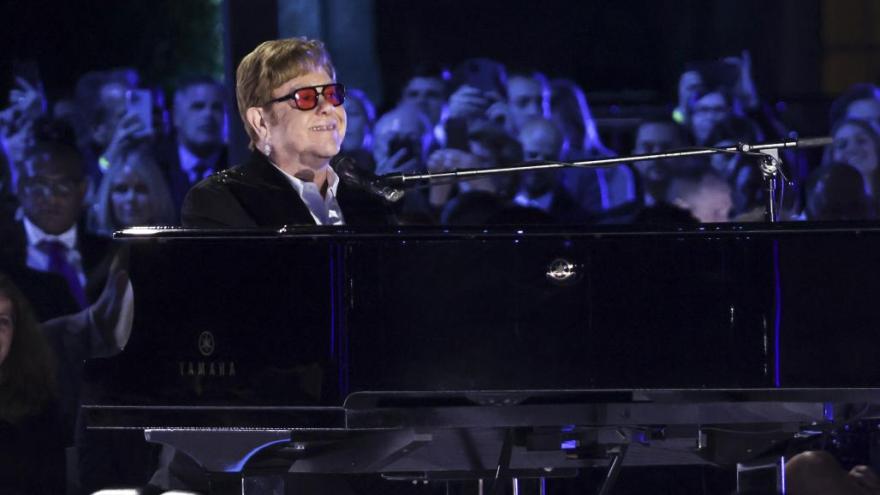 Sir Elton John performs during an event on the South Lawn of the White House on September 23.

(CNN) -- President Joe Biden on Friday presented Sir Elton John with the National Humanities Medal, surprising the music icon following a performance on the South Lawn of the White House.

"I'm never flabbergasted, but I'm flabbergasted," a visibly moved John said, thanking the President and saying that he will "treasure" the honor.

The medal, according to the Friday presentation, was to honor John "for moving our souls with his powerful voice and one of the defining song books of all time. An enduring icon and advocate with absolute courage, who found purpose to challenge convention, shatter stigma and advance the simple truth -- that everyone deserves to be treated with dignity and respect."

Biden said that he and first lady Jill Biden had invited John to the White House to thank him and praised the singer for his music and advocacy in the global fight against HIV/AIDS.

"As Jill just mentioned, we're joined by so many people that ... he's set free to be themselves, to be treated with dignity and respect they deserve. Families and advocates in the fight against HIV/AIDS. A fight that he has led with sheer will, a??? fight for those lives lost and those lives we can save. Leaders standing up for equality of all people, no matter who you are, or who you love," the President said.

John was met with standing ovations as he performed a number of hit songs, including "Your Song," "Rocket Man" and "Tiny Dancer," during the concert titled "A Night When Hope and History Rhyme," in collaboration with A&E Networks and The History Channel.

Speaking in between songs, John addressed former first lady Laura Bush, who was also in attendance, acknowledging former President George W. Bush's "astonishing" work on the Presidential Emergency Plan for AIDS Relief, which he started while in office and is credited with changing the trajectory of the HIV/AIDS crisis around the world.

"I want to say to the first lady, President Bush accelerated the whole thing with his PEPFAR bill. It was the most incredible thing," John said, asking Laura Bush to give her husband a hug on his behalf.

The fight to end the HIV epidemic, John said, is one of the few truly bipartisan issues in the US, adding: "I just wish America could be more bipartisan on everything."

The night had moments of levity, such as when John lightened the mood as he took the stage, joking, "I don't know what to say. What a dump," drawing laughs from attendees. And it also drew emotion, including when Biden could been seen wiping tears as John sang, "Crocodile Rock."

The singer previewed the song by saying it meant a lot to the President, who used to sing it with his kids while driving them to school. The White House pool reported that later in life, the song helped Biden connect with his son Beau as he was dying of brain cancer and unable to communicate well.

Biden, who noted his family "like so many Americans" loves John's music, ended the program with thanks.

"On behalf of the American people, thank you -- and I sincerely mean this -- for moving the soul of our nation," he told John.